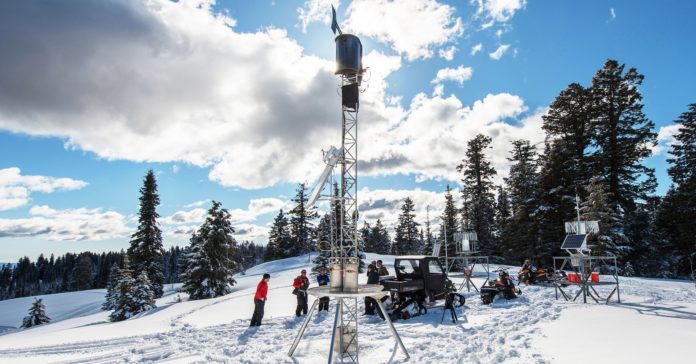 As the glam metal band Cinderella once said, you don’t know what you’ve got till it’s gone. I’m relatively certain they weren’t talking about snow, but let’s pretend they were anyway: Global warming threatens to wreak havoc on snowpack. The American west in particular already has a snowpack problem, which means less water for drinking and powering hydroelectric plants.

Unfortunately you can’t just force snow to fall out of the air. Or can you? For over half a century now, scientists have been toying with the idea of cloud seeding for snow—that is, inducing clouds to spit out more moisture. Think Olympics that never run low on snow (in PyeongChang, almost every bit of snow on the ground was made by machines), and snowpacks that are forever … packed. Problem is, for all these decades, it’s been tough to prove that cloud seeding is actually working.

So, let’s talk about how snow forms in the first place. In a cloud you’ve got a whole mess of gas and water molecules running around bumping into each other. “Getting them to actually start to freeze, they have to bump into each other in the right way to lock into an ice lattice,” says Andrew Gettelman, who studies cloud microphysics at the University Corporation for Atmospheric Research. “That’s much easier if there’s a solid substrate.”

A closeup of the generator.

But clouds aren’t known for being very solid. However, they do contain particles like dust, which forms a sort of foundation on which ice can grow, ice that then falls to the ground as snow. Cloud seeders can theoretically hijack this process by tricking the ice to form around a compound called silver iodide. They go about this one of two ways: by flying through a cloud and spraying the stuff, or by using ground-based generators to burn a silver iodide solution that rises into the clouds on a raft of hot air.

“It turns out that silver iodide has a molecular structure that’s very similar to ice,” says University of Wyoming atmospheric scientist Jeff French, who studies cloud seeding. “What that means is that if a liquid water droplet were to capture a silver iodide particle, or were to perhaps grow initially on a silver iodide particle as a liquid drop, it would be able to freeze more readily at higher temperatures than it would naturally.”

What’s important to understand here is that cloud seeding doesn’t work by creating moisture, but by encouraging it to form into ice. So if cloud seeding works, the results wouldn’t be dramatic: You can only coax so much moisture out of clouds, and this certainly isn’t about creating new clouds out of nothing.

And that only makes it more difficult to prove that the process produces extra snow. The problem is that as we all know, weather is finicky. You can seed clouds to your heart’s content and see maybe a 10 percent bump in snowfall over the course of 5 years, but it’s tough to prove that it wasn’t a natural fluctuation in weather that did it.

What French and his colleagues have been able to do, though, is confirm the hypothesis of how silver iodide would work to form snow, thanks to some fancy technology.

They got a plane loaded with sensors—radar and lidar and all kinds of good stuff. As they flew through a seeded cloud, particles passed through a laser beam. This allowed the researchers to capture a 2-D image of the particle and determine if it was liquid or ice. It also allowed them to quantify the concentration of particles over a certain distance, say 50 or 100 meters, in parts of a cloud that had been seeded versus parts of a cloud that hadn’t.

These flares are ignited as a plane flies through a snowstorm, releasing silver iodide particles into the clouds.

“Under certain conditions, we have demonstrated unambiguously that the chain of events that are hypothesized to occur when you add silver iodide to a cloud do indeed occur,” says French. That is, silver iodide seems to facilitate the freezing of liquid into ice particles. “We can quantify how many particles were being produced, how fast those particles grew, etc.,” he adds. “Now, does that mean that over the course of a year you can produce 15 percent more snow? We’re a long way from being able to answer that question.”

The problem is that it’s tough to run a controlled experiment with cloud seeding. “That gives it a little bit of a bad reputation in the field,” says Gettelman, “because it’s hard to do a really good statistical study that shows you can make it snow more than if you didn’t seed the cloud. How do you know what would have happened if you didn’t do it?”

Still, that hasn’t stopped a lot of folks, particularly in the western US, from seeding anyway. Take Idaho Power, which runs 17 hydroelectric projects. Idaho Power is in the business of water, so in the early ‘90s, amid a multiyear drought, a shareholder suggested the utility explore cloud seeding to boost snowpack. The utility’s program went fully operational in 2005, and today consists of 55 ground-based generators in southern Idaho, as well as three planes.

Idaho Power says it’s seen an annual increase in snowpack of 12 percent in one of its regions (other regions tally somewhere between that and 5 percent). “Everything that we’ve done points to a benefit,” says atmospheric scientist Derek Blestrud of Idaho Power. “We’ve never had something that points the other way.”

Even if cloud seeding is effective, is this something we should be mucking with? “If we find out that it works, that doesn’t mean we should do it,” says Nicholas Anderson, an associate program director at the National Science Foundation, which funded some of French’s seeding research. “It means we should understand what happens downstream of it too.”

If seeding helps coax moisture out of a cloud and dump it in one region, that may mean another region down the road loses out on snow. But we’re also dealing with relatively small amounts of moisture here. “When you step back and you look at the scales we’re talking about,” says French, “in best case scenarios that might actually fall out as a result of cloud seeding, I think you’re having a very tiny impact on the overall water balance in the atmosphere.”

Wouldn’t want to upset the neighbors, after all.

Sony Buys Ericsson Out Of Mobile Phone Partnership For $1.47 Billion

GizmoCrazed - October 27, 2011 1
To pace up in the race of smartphones with bigger fishes in this sector, Sony has decided to end its partnership with Ericsson. As...

Why the International Space Station Is the Single Best Thing Humanity...