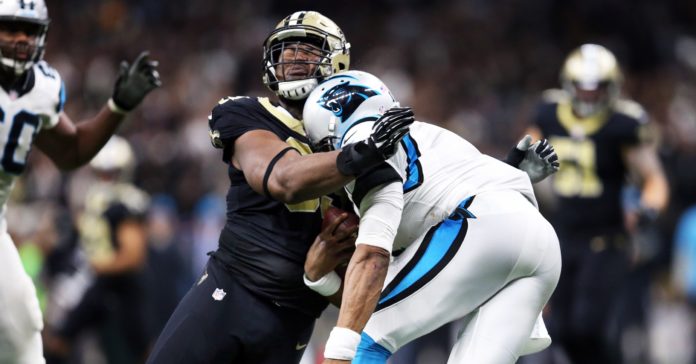 It’s been a turbulent year for the NFL. Ratings plummeted 12 percent in the regular season, even more during the playoffs. It’s hard to know what hurt the league more, its public feuding with the White House over players protesting police brutality during the national anthem or the fact that people don’t watch TV anymore. But it’s not hard to know what’s hurting the league’s players: This season, the NFL reported 281 concussions, the most since the league began sharing that data in 2012.

As the nation tunes in to Super Bowl LII on Sunday, the link between repeated blows to the head and the neurodegeneration of chronic traumatic encephalopathy, or CTE, has never been stronger. Strong enough that the NFL has agreed to an estimated $1 billion class-action lawsuit brought by some 18,000 retired players. Strong enough that John Urschel, an offensive lineman for the Baltimore Ravens, retired this past July at the age of 26. His decision came two days after doctors at the University of Boston released a study of 111 brains of former NFL players, in which all but one of them showed signs of CTE. Most were linemen. Urschel, who is pursuing a doctorate in math at MIT, did the calculus and hung up his cleats.

Although it’s been 90 years since CTE was first described—in boxers, as “punch drunk syndrome”—the mechanisms of the disease are still poorly understood. Scientists believe that repeated brain trauma triggers the buildup of a neurotoxic protein called tau. But why that results in symptoms of confusion, memory loss, and enhanced aggression is still largely a mystery. Currently, CTE can only be diagnosed through autopsy, and there is no treatment.

But one young biotech company believes there might, one day, be a way to prevent it.

United Neuroscience, a three-year-old spinout of veteran vaccine-maker United Bioscience, announced this week it’s developing a drug designed to inoculate the brain against CTE. Traditional vaccines work by introducing a weakened version of a virus, or just a little piece of it, and training the body’s immune system to recognize and assail it. Doing that for a protein you yourself make, like tau, is much trickier. Millions of years of evolution have fashioned the human body into a hardline xenophobe; foreigners bad, me good.

So United Neuroscience’s team is designing a synthetic frankenmolecule—one that looks a bit like tau, and a bit like a virus, with a damper switch built in to prevent the immune system from going overboard. Importantly, the peptide has to target only the aggregated form of tau, not the normal, free-floating protein that helps stabilize your cells’ internal structures.

You can think of tau as a necklace, 440 beads long. Sometimes, say after a lifetime of taking left hooks in the noggin, those necklaces get tangled. And it turns out they tangle into a few predictable patterns, only a few of which the body has a hard time getting rid of on its own. So UNS is screening dozens of vaccines to find antibodies that only stick to these versions. They’re currently testing them in animal models and plan to move into clinical trials next year.

It’s part of the company’s larger strategy to employ these “endobody” vaccines to stave off all kinds of neurodegenerative disorders, including Alzheimer’s and Parkinson’s, perhaps even traumatic brain injury itself. “We wouldn’t take healthcare workers into some area that’s yellow fever-infested without protecting them first,” says Ajay Verma, UNS’s chief medical officer and former US Army Lt. Colonel and staff neurologist at Walter Reed Army Medical Center. “Why not treat vocations that have a high risk of head injury—like professional athletes and soldiers—the same way? We need to start thinking about head trauma as an occupational hazard.”

Inoculating troops and footballers against debilitating cognitive trouble so America can keep sending them out to battle on the gridiron or in the fields of Fallujah certainly raises some ethical issues. But it’s the technical issues that will have to be overcome first. Remember how there’s no way to diagnose CTE while the person’s alive? That’s going to make it pretty hard to find CTE patients to test a vaccine in. Companies are working on ways to image tau, and researchers are developing blood tests to monitor how much of the protein is leaking out of the brain. But there’s still an awful lot of work to be done to even prove that getting rid of tau or preventing its buildup in the first place will put a stop to CTE.

In the meantime, other technologies are arriving to help tackle the problem at the root of CTE: Diagnosing concussions is still a subjective science, and too many hits go unnoticed.

When the brain is damaged, neurons release distress signals into the blood, but until recently they’ve occured in amounts too small to measure. That’s changing. Last year diagnostics giant Abbott signed an $11.2 million contract with the Department of Defense to finish developing a blood-based test for concussions they’ve been working on together since 2014. The company is in the process of integrating the assays into their widely used handheld blood analyzers, and expect to make them available to the DoD and the general public within the next year or two.

Brainwaves are also gaining credibility as a potential diagnostic marker. Scientists at Columbia University are prototyping EEG-embedded football helmets that can record concussions in real time, and relay an encrypted version of that signal to a phone or tablet-holding coach on the sideline. It’s a high-tech take on an old approach: In the ‘60s, researchers glued electroencephalographs to the scalps of college players to measure their brain waves, looking for the telltale slow-down after a concussion. They managed to capture the signal, but the detectors were so impractical they abandoned the idea.

Today, with miniaturized sensors and cloud computing, it’s a much more streamlined proposition. And unlike blood tests, the EEG signal can capture what are called “sub-concussive events,” impacts that still destroy neurons, and can pile on additional long-term damage with each hit.

“That period of continuing play, when a player has just been hit in the head and shaken up, that’s when they’re at highest risk for a much more dangerous injury,” says James Noble, a neurologist at Columbia’s Irving Medical Center who’s working with engineers at the university to further miniaturize the components and send the helmet toward FDA approval as a formal diagnostic.

But until there’s a treatment, these promising technologies are likely to be plagued by the same data privacy concerns that the NFL’s failed forays into accelerometer-laden helmets. Nobody negotiating a contract wants a team owner to be able to see how many traumatic brain injuries they’ve sustained. That number could end careers. On the other hand, it could also end lives.

Blows to the Head

Google+ App For iPhone Is Now Available On The App Store

GizmoCrazed - July 19, 2011 3
The Google+ app for iPhone is now available on the App store. It a great step forward from the web-only experience that was available...

Affetto is the wild-boy-head robot of your nightmares

The Android Version Of “So You Think You Can Dance” [VIDEO]