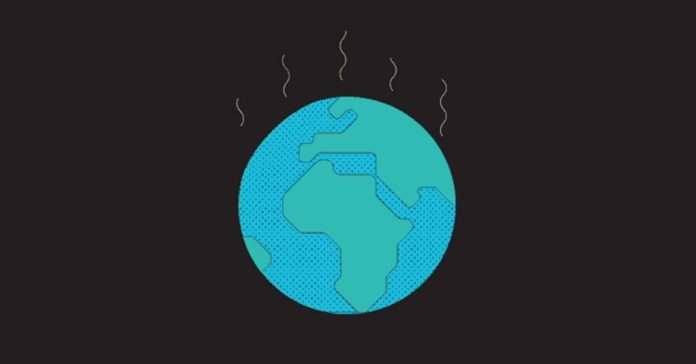 The world is busted. For decades, scientists have carefully accumulated data that confirms what we hoped wasn’t true: The greenhouse gas emissions that have steadily spewed from cars and planes and factories, the technologies that powered a massive period of economic growth, came at an enormous cost to the planet’s health. Today, we know that absent any change in our behavior, the average global temperature will rise as much as 4 degrees Celsius by the end of the century. Global sea levels will rise by up to 6 feet. Along with those shifts will come radical changes in weather patterns around the globe, leaving coastal communities and equatorial regions forever changed—and potentially uninhabitable.

Strike that. We are already seeing the effects of a dramatically changed climate, from extended wildfire seasons to worsening storm surges. Now, true, any individual weather anomaly is unlikely to be solely the result of industrial emissions, and maybe your particular part of the world has been spared so far. But that’s little solace when the historical trends are so terrifyingly real. (Oh, and while it used to take mathematicians months to calculate how the odds of specific extreme weather events were affected by humans, they’ve knocked that data-crunching time down to weeks.)

Thankfully, it seems most of the world’s nation-states are beyond quibbling over the if of climate change—they’re moving rapidly onto the what now? The 2015 Paris climate agreement marked a turning point in the conversation about planetary pragmatics. Renewable energy in the form of wind and solar is actually becoming competitive with fossil fuels. And the world’s biggest cities are driving sustainable policy choices in a way that rival the contributions of some countries. Scientists and policymakers are also beginning to explore a whole range of last-ditch efforts—we’re talking some serious sci-fi stuff here—to deliberately, directly manipulate the environment. To keep the climate livable, we may need to prepare for a new era of geoengineering.

How this Global Climate Shift Got Started

If we want to go all the way back to the beginning, we could take you to the Industrial Revolution—the point after which climate scientists start to see a global shift in temperature and atmospheric carbon dioxide levels. In the late 1700s, as coal-fired factories started churning out steel and textiles, the United States and other developed nations began pumping out its byproducts. Coal is a carbon-rich fuel, so when it combusts with oxygen, it produces heat along with another byproduct: carbon dioxide. Other carbon-based fuels, like natural gas, do the same in different proportions.

When those emissions entered the atmosphere, they acted like an insulating blanket, preventing the sun’s heat from escaping into space. Over the course of history, atmospheric carbon dioxide levels have varied—a lot. Models of ancient climate activity, hundreds of millions of years back, put carbon dioxide levels as high as several thousand parts per million. In the past half-million years or so, they’ve fluctuated between about 180 and 300 parts per million. But they haven’t fluctuated this fast. Today, atmospheric CO2 is at 407 ppm—roughly one and half times as high as it was just two centuries ago. And we know for certain that extra greenhouse gas is from humans; analysis of the carbon isotopes in the atmosphere show that the majority of the extra CO2 comes from fossil fuels.

Radiation from the sun hits the Earth’s atmosphere. Some of it travels down to warm the Earth’s surface (A), while some of it bounces right back into space (B). Some of the energy, though, is absorbed by molecules of greenhouse gases—carbon dioxide, water, methane, and nitrous oxide—that prevent it from escaping (C). Over time, the trapped energy contributes to global warming.

The result: extreme weather. There’s global warming, of course; the Earth’s average temperature has increased 1.1 degrees Celsius since the late 19th century. But it goes further. As oceans absorb heat and polar ice sheets melt, hurricane seasons become more severe as warm water from the oceans kicks warm, moist air into the atmosphere. Sea levels rise—about 8 inches in the past century. Critically, the rate of these changes is increasing.

All of this has led 97 percent of climate scientists to agree that warming trends are very likely the result of human activity. And in 1988, that bulk of research led to the founding of the United Nations’ Intergovernmental Panel on Climate Change, which has now issued five assessment reports documenting all the available scientific, technical, and economic information on climate change. The fourth report, in 2007, was the first to clearly state that the climate was unequivocally warming—and that human-created greenhouse gases were very likely to blame.

Just because the panel came to a consensus doesn’t mean everyone else did, though. In 2009, climate scientists had their own WikiLeaks scandal, when climate deniers released a trove of emails from scientists, including the one behind the famous 1999 “hockey stick” graph showing a sharp upturn in global temperature after the Industrial Revolution—one that was clearly sharper than the many global warmings and coolings the Earth has seen. Excerpts taken out of context from those emails showed that researcher, Michael Mann, purportedly conspiring to statistically manipulate his data. Placed back in context, they clearly didn’t.

Political controversy has continued to call into question scientists’ consensus on data supporting the concept of human-caused climate change, motivated by the financial incentives of the fossil fuel industry. But in 2015, the world’s leaders appeared to transcend those squabbles. On December 12, after two weeks of deliberations at the 21st United Nations Conference on Climate Change in Le Bourget, France, 195 countries agreed on the language in what’s known as the Paris agreement. The goal is to keep average global temperature increase to below 2 degrees Celsius above pre-Industrial levels, and as close to 1.5 degrees as possible. It does so by having each country submit a commitment to reduce emissions and collectively bear the economic burden of a shift from fossil fuels—while acknowledging that developing nations would be denied a certain amount of growth if they had to give up cheap energy.

What’s Next for Climate Change

The good news is, the global community is pretty united on the risks of climate change. The science is getting good enough to link specific extreme events—anomalous hurricanes, extreme flooding events—directly to human-caused climate change, and that’s making it easier to build a case for dramatic action to stem the damage. But what should those actions be?

The most obvious solution to climate change woes is a dramatic shift away from fossil fuels and toward renewable energies: solar, wind, geothermal, and (deep breath) nuclear. And we’re making solid progress, growing our renewable electricity generation about 2.8 percent every year worldwide.

But there’s an increasing understanding that even if every country that originally signed up for the agreement meets every single one of their stated goals, the Earth is still set to experience some dramatic changes. Some even argue that we’ve passed the tipping point; even if we stopped emitting today, we’d still see dramatic effects. And that means we need to start preparing for a different kind of climate future—primarily, in the way we build. The floods will come, forcing us to make new rules governing building. An ever-lengthening wildfire season will discourage building along the wildland-urban interface. And people will stream in from regions made uninhabitable by drought or heat or flooding, forcing other countries to adapt their immigration policies to a new class of refugees.

All of those changes will cost money. That was one of the primary motivators for the Paris agreement: Switching away from cheap fossil fuels means that businesses and companies are going to need to take a financial hit to ensure a profitable, livable future. Which is why many of the solutions to climate change have nothing to do with climate science, per se: They have to do with economics.

Socially conscious investors, for their part, are making a difference by holding businesses to account for their impacts on the climate—and the ways in which climate change will impact their business. Last year, a collective of small-scale pension systems forced Occidental Petroleum, one of the country’s largest oil companies, to disclose climate risk in its shareholder prospectus; ExxonMobil caved to pressure in December 2017. Places with large endowments, like universities, are facing political pressure to divest from the fossil fuel industry.

These are all indirect ways of holding the fossil fuel industry accountable for the financial toll it takes on the Earth with every gigaton of greenhouse gases emitted. But there are more direct ways they can pay up, too. After reporting by Inside-Climate News revealed in 2015 that ExxonMobil has long known about the risks of climate change, the company is being investigated by attorneys general in multiple states to determine if it violated consumer or investor protection statutes. The city of San Francisco is suing the five largest publicly-held producers of fossil fuels to get them to pay for infrastructure to protect against rising sea levels. New York City followed with a similar suit.

Let’s say those suits succeed, and at-risk cities get some help making the massive infrastructure updates necessary to protect their coastline investments. After doing everything we can to reduce further carbon emissions and protect life and property from the dangers of a changing climate, it still won’t be enough to keep global temperatures from rising beyond that 2-degree-Celsius tipping point. So that’s when humanity goes into proactive mode, potentially unleashing a controversial set of experimental technologies into the atmosphere. This is geoengineering: Removing carbon dioxide and reducing heat through, let’s say, experimental means. Like salt-spraying ships, and supersized space mirrors.

One of the great hopes of the IPCC’s latest report is that we can pull carbon dioxide directly out of the atmosphere and store it underground through a process called bioenergy with carbon capture and storage. But that technology doesn’t exist yet. Another strategy attempts to reduce heat by injecting sulfate particles into the atmosphere, reflecting solar radiation back into space—but that could trigger too much global cooling. Put mildly, most of the propositions for geoengineering are underdeveloped. The drive to complete those ideas will depend on the success of global cutbacks in the decades to come.

GizmoCrazed - August 19, 2016 0
Our mobile devices communicate with us through sounds and screens, but a new wristband designed by Somatic Labs relies instead on touch. Moment is a...