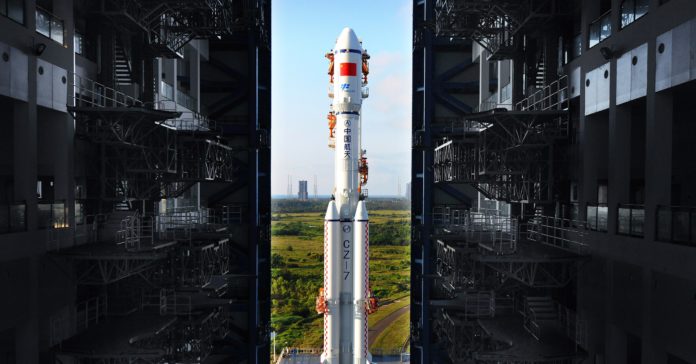 In a China Global Television Network video from 2003, taikonaut Yang Liwei leans back in his orbital capsule, the overstuffed stripes of his spacesuit legs filling the frame. His helmet shield is up, so the viewer can gaze into his eyes as he speaks: “Greetings to people around the world!” His eyes move leftward, out of the frame. “Greetings to my colleagues in space!” he says.

Liwei was China’s first astronaut, reaching orbit decades after US and Soviet space-farers. Not that it’s a competition. (Space is for peace and cooperation … right?) Nevertheless, when it comes to space exploration, China has mostly medaled bronze. Third country to achieve independent human spaceflight. Third to send women to space using homemade technology. Third to staff a crewed space station. Third to slide a probe in for a soft landing on the moon.

China has so far stuck to replicating the successes of other nations’ space programs. But the country has big ambitions. In 2016, the China National Space Administration revealed a five-year plan, which includes research into sample-return missions, sending the first probe to soft-land on the far side of the moon, and roving robots around Mars, in addition to crewed space-station work.

These big plans might seem a little starry-eyed for the underdog of the space-power set, but there’s a new reason to believe in their promise. In January, the Chinese space program signed a memorandum of understanding with Luxembourg’s Ministry of the Economy, promising to cooperate in space ventures and development. While there’s no monetary value associated with the agreement, it does put on paper that, where some of their goals overlap, the two countries plan to work toward them together. Combine Luxembourg’s foresight and investments with China’s native launch capability, proven record of putting people in space, and budget for continued cosmic development, and the two countries could be poised for gold.

Together, said the announcement, the countries have now pledged “scientific, technical, economic and political cooperation…in the exploration and use of outer space for peaceful purposes…[including] the utilization of space resources.” China is also sending scientists to Luxembourg to do research related to exploring and exploiting space resources, as part of its new Research Laboratory of Deep Space Exploration there—a lab announced at the same time as the memorandum.

It’s not the first time either country has played doubles. China has signed such space memoranda or cooperation agreements with a number of countries since 2011, and collaboration is basically a way of life for Luxembourg; when you’re little and landlocked and have a population just slightly bigger than Albuquerque’s, you can’t do everything you want to do on your own. In 2016, the Lilliputian nation established its SpaceResources.lu initiative, to create “a unique legal, regulatory and business environment” conducive to space mining and manufacturing. It’s since been luring companies with its dedication to astro-innovation, and investing in them. The country, whose GDP per capita puts the US’s to shame, is also a kind of tax haven, so entities that transfer some or all operations there can benefit twice over from the country’s finances.

On top of that, Luxembourg also recently codified a law that gives companies the rights to material they mine in space (the US has a similar law). So it’s no surprise that Luxembourg has been able to team up with other countries—like Portugal, Japan, the United Arab Emirates, and now China.

“The long-term objective here is to create a new industry, to really seize the opportunities that space resources bring to create a new space economy,” says Mathias Link, deputy director of space affairs at the Luxembourg Ministry of the Economy. On Luxembourg’s SpaceResources.lu advisory board page, a number of international affiliates smile from their thumbnails. There’s Jean-Jacques Dordain, former director general of the European Space Agency. There’s Seung Jo-Kim, once president of the Korea Aerospace Research Institute. From the US comes Pete Worden, previous director of NASA’s Ames Research Center.

And then, finally, there’s Ji Wu, current director general of China’s National Space Science Center. The Luxembourg-China team-up? “That was his idea,” says Link. (Wu declined to comment for this article). Link says he and his Luxembourgish compatriots liked it—especially because, collaboratively, the two countries plan to figure out how to make space resource stuff more global, outside their twosome. “For us, it is extremely important that we cooperate with other countries on this topic,” says Link, “because, in the end, this will be an international effort.”

The US hasn’t signed on in an official capacity. Link says it might happen, though. “It seems also quite natural to do such an agreement because we have already a lot of cooperation with the US,” he says.

Some US companies have even been wooed by Luxembourg’s deals and laissez-faire regulatory attitude. Mining hopefuls Deep Space Industries and Planetary Resources have joined the Grand Duchy’s initiative, as has small satellite company Spire, which aims to gather and analyze data on weather, ships, and planes.

But while two of those companies have explicit “space resources” aims, China hasn’t said much about its goals in that arena. So what’s it doing in the Duchy? Link didn’t specify what China’s new Research Laboratory of Deep Space Exploration would research (“research supporting our space resources initiative”), but he did reveal one area of interest: telecommunication. A deep-space communications infrastructure. “Once you have all the missions going to moon, Mars, asteroids, you of course need a network that you can use to control the missions and to bring back data,” says Link. That’s useful to China’s personal travel itinerary in the same way that it’s useful to space miners—everyone needs to talk and get talk back from spacecraft.

China plans to send a few scientists to Luxembourg to start this lab. And then, perhaps, says Link, some Chinese space companies will come hang shingles, too, as Chinese banks and investors have already done.

For Luxembourg—which has not rockets, nor astronauts—to push both toward the scientific and financial goals, a partnership with China makes sense. “China has deep pockets,” says Carissa Christensen, the CEO of Bryce Space and Technology, a consulting firm, “and a growing technological capability and indigenous launch capability.”

Which is something a lot of Luxembourg and its partners might not mind being connected to. Partners like Tokyo’s robotic exploration company ispace, which joined Luxembourg through SpaceResources.lu. It raised the most Series A venture capital of any space company—ever. Also space-based intelligence and manufacturing company Kleos, which is planning an IPO in July.

There’s a lot of collaboration and collation going on in Luxembourg—company-wise, country-wise. And, in space, sharing isn’t just caring. It’s how you set the stage to run the show.

Snips lets you build your own voice assistant to embed into...