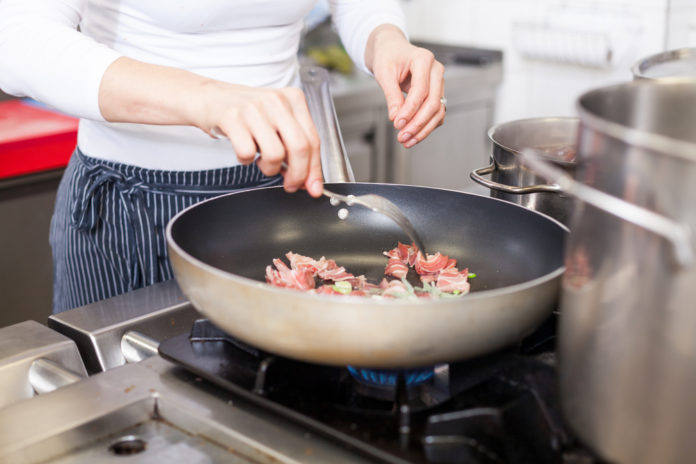 Uhoh: Those non-stick pans you love cooking with are often made with a chemical that could contribute to weight gain. (Credit: Shutterstock)

More than 38 percent of American adults and 17 percent of American children are obese. And while there are numerous ways to shed pounds, it’s often difficult for many people to keep them off. It turns out some common items regularly used by people across the world could be the culprit.

A study released Tuesday in PLOS Medicine suggests that perfluoroalkyl substances (PFASs) could be contributing to weight gain and lead to obesity. Since the 1950s, these environmental chemicals have been used in food packaging, non-stick cookware, stain resistant fabrics and carpets, water-repellent clothing, and even some cosmetics. These manmade compounds’ effects on humans aren’t well known, but past studies on animals have shown they may disrupt the endocrine system, or the collection of glands that produce hormones. PFASs have also been linked to cancer, immune issues and high cholesterol.

Over the course of two years, researchers put 621 obese and overweight men and women on energy-restricted diets and tracked their weights. Measuring the plasma concentrations of PFASs, they were able to gather metabolic information including body weight and resting metabolic rate (RMR).

Researchers found that those with higher levels of PFASs at the beginning of the experiment were associated with regaining the pounds they lost, especially in women. Participants lost on average 14 pounds (6.4 kg) in the first six months, regaining almost half of the weight throughout the study. The weight gain could be due to a decline of RMR over the first six months.

“These chemicals may lead to more rapid weight gain after dieting,” Qi Sun, co-author of the study, told the Guardian. “It is very hard to avoid exposure to PFASs, but we should try to. It’s an increasing public health issue.”

With that said, the authors can’t definitively link PFAS chemicals to the weight regain. Some potentially important influences weren’t measured including socioeconomic and psychosocial factors and potential relapses to prior diets weren’t considered. Still, the authors hope this study will lead to further research of environmental chemicals and their possible impact on obesity.