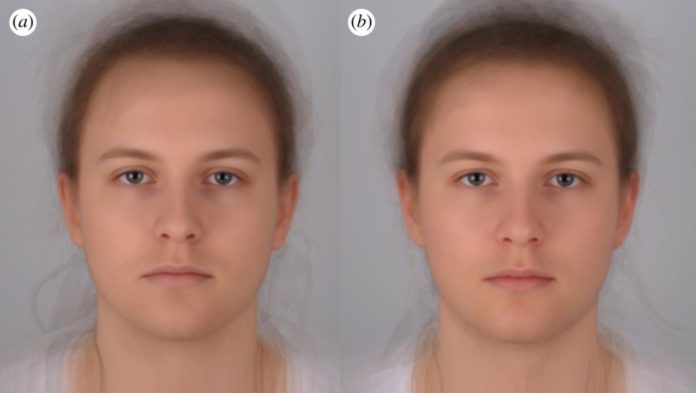 A composite, layered image of 16 individuals (eight women) photographed twice in a cross-over design. These photos average the facial features of all 16 people into a single face. Can you tell which person is sick? A or B? (Answer at the bottom of this article. (Credit: Axelsson et al)

Humans seem to possess an uncanny ability to read sickness on others’ faces, even in the earliest stages of an infection.

No kidding, you might say. Who couldn’t pick out a poor soul who’s been in the throes of the flu, red nose and all? But our ability to detect sickness is far more sensitive than that, according to a study by John Axelsson and his team from the Karolinska Institutet in Stockholm, Sweden. Our face-assessing abilities are, perhaps, so sensitive, that we might even detect signs of sickness in another person’s face long before they know they’re sick.

It’s well known that humans immediately judge attractiveness, trustworthiness, dominance and basic emotions in a face; so, why not sickness?

In a simple experiment, Axelsson injected healthy volunteers with either a placebo or lipopolysaccharide (LPS), an endotoxin that kicks off an inflammatory stress response in the body—it simulates the physical response to being sick. Researchers snapped photographs of each person just two hours after receiving an injection and after blood tests revealed the inflammatory response had started.

Based on their responses, people who received the LPS injection appeared to have paler lips and skin, a more swollen face, mouths with drooped corners, hanging eyelids, redder eyes and less glossy skin. Of all of these indicators, pale lips were the most apparent sign of sickness noted by observers. Researchers published their study Wednesday in the journal Proceedings of the Royal Society B.

Evolutionarily speaking, detecting and avoiding sick individuals is a survival imperative. Animals with powerful olfactory abilities have the luxury of detecting the chemical signatures of illness in urine and feces. And while there’s some evidence that humans can smell a sick person, our visual diagnostic abilities might be far more refined than our noses’.

Let’s keep in mind, people were spotting sickness in others just hours after receiving an infection. This is an indication that the subtlest cues in a person’s face can alert us to sickness, before their nastiest, phlegmiest, wheeziest symptoms emerge. And this early detection ability is key, because people tend to be most contagious in the earliest days of their ailment, which could be days or weeks before they reach for the Kleenex. Therefore, our sensitivity to changes in the face may provide fair warning to stay away.

Now, to be clear, a success rate of .62 is better than chance, but it certainly didn’t floor researchers. That the predictive power of their ratings was low wasn’t surprising, as the observers were only exposed to photographs for few seconds, the researchers explain.

In reality, people may be even more receptive to sick-face cues in person, especially if they’ve seen a person before—in good health.

“There is a need to further test how accuracy can be improved, for example through learning, and whether identification is similar across diseases and ethnic groups,” researchers wrote in their study.

Moving forward, researchers would like to narrow down facial cues that are exclusive to sickness, and not, say, outward signs of fatigue or basic emotions like anger and fear. For example, there’s a fair amount of overlap in changes that occur to faces of tired people and sick people. Their research also begs further questions: Do certain diseases affect facial features in specific ways? Could health professionals better identify a sick person with facial-recognition practice?

The earlier contagion is detected, the easier it is to contain. So, let’s extrapolate even further: If researchers can identify all the nuance of a sick face, it’s easy to foresee a facial-recognition app that can provide a quick check-up via a cell phone.

If that theoretical technology were to ever arrive, kids can about forget sticking a thermometer on a light-bulb to feign a fever and play hooky. Moms will just pull out their iPhones, snap a photo and send their deceptive offspring off to school.

And, in case you’re playing, the sick person—who received the LPS injection—in the top image is (A). Were you correct?

GizmoCrazed - June 13, 2018 0
Way back in October of last year, Ring announced “Ring Protect” — a modular, no contract, DIY home security system. After a few delays, a...