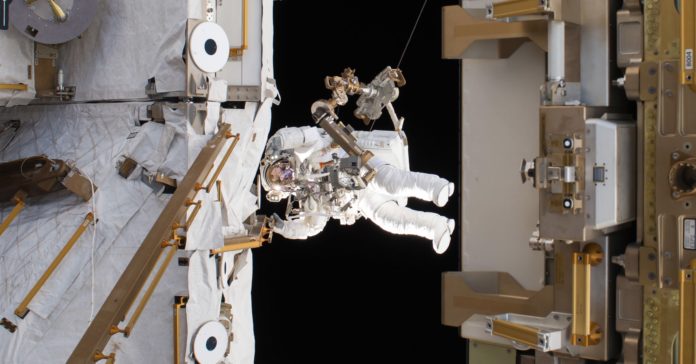 This week, I settled down to watch the first episode of The 100. If you haven’t seen the show, I’ll just point out that it takes place in the near future (though it ran, on the CW, in the near past). For reasons that I won’t get into, there is a spacecraft with a bunch of teenagers that is traveling from a space station down to the surface of the Earth. During the reentry process, one kid wants to show that he is the master of space travel and that he’s awesome. So what does he do? He gets out of his seat and floats around as a demonstration of his mastery of weightlessness. Another teenager points out that he’s being pretty dumb—and that he’s going to get hurt very soon.

OK, that is enough of the description of the scene so that we can talk about physics. The point is that there is one dude “floating” around in the spacecraft during reentry.

Before I over-analyze this short scene, let me add a caveat about my philosophy on science and stories. I’ve talked about this before, so I’ll just give a summary: The number one job for a writer of a show is to tell a story. If the writer distorts science in order to make the plot move along—so be it. However, if the science could be correct without destroying the plot, then obviously I’d prefer it.

On to the over-analysis!

Obviously this scene has to do with gravity, so we should talk about gravity—right? In short, gravity is a fundamental interaction between objects with mass. Yes, any two objects that have mass will have a gravitational force pulling them together. The magnitude of this gravitational force depends on the distance between the objects. The further apart the objects get, the weaker the gravitational force. The magnitude of this force also depends on the masses of the two objects. Greater mass means a greater force. As an equation, this would be written as:

In this equation, the masses are described by the variables m1 and m2 and the distance between the objects is the variable r. But the most important thing is the constant G—this is the universal gravitational constant and it has a value of 6.67 x 10-11 Nm2/kg22. That might seem like it’s important, so let me give an example that everyone can relate to. Suppose you are standing somewhere and your friend is right there with you and you two are having a conversation. Since you both have mass, there is a gravitational force pulling the two of you together. Using rough approximations for distance and mass, I get an attractive force of 3 x 10-7 Newtons. Just to put that into perspective, this value is fairly close to the force you would feel if you put a grain of salt on your head (yes, I have an approximate value for the mass of one grain of salt).

So, the gravitational force is super tiny. The only way we ever notice this force is if one of the interacting objects has a super huge mass—something like the mass of the Earth (5.97 x 1024 kg). If you replace your friend with the Earth and put the distance between you and your friend-Earth as the radius of the Earth, then you get a gravitational force of something like 680 Newtons—and that is a force you can feel (and you do).

Is There Gravity in Space?

Now for the real question. Why do astronauts float around in space unless there is no gravity? It sure seems like there is no gravity in space—it’s even referred to as “zero gravity.” OK, I’ve answered this before, but it’s important enough to revisit the question.

Let’s use an Earth radius of 6.371 x 106 meters. With this value, a person with a mass of 70 kg would have a gravitational force of 686.7 Newtons. Now moving up to the orbital height of the International Space Station, you would be an extra 400 km farther from the center. Recalculating with this greater distance, I get a weight of 608 Newtons. This is about 88 percent the value on the surface of the Earth (you can check all my calculations here). But you can see there is clearly gravity in space.

Oh, here is some extra evidence. Why does the moon orbit the Earth? The answer: gravity. Why does the Earth orbit the Sun? Yup, it’s gravity. In both of these cases, there is a significant distance between the two interacting objects—but gravity still “works,” even in space.

But why do astronauts float around in space? Well, they float around when in orbit—if there was a super tall tower reaching into space, they wouldn’t float around. The “weightless” environment is caused by the orbital motion of the people inside a spacecraft or space station. Here is the real deal. If the only force acting on a human is the gravitational force, that human feels weightless. Standing on a tall tower would result in two forces (gravity pulling down and the tower pushing up). In orbit, there is only the gravitational force—leading to that feeling of weightlessness.

Actually, you don’t even need to be in orbit to feel weightless. You can be weightless by having the gravitational force as the only thing acting on you. Here is a situation for you to consider. Suppose you are standing in a stationary elevator at the top of a building. Since you are at rest, the total force must be zero—that means the downward gravitational force pulling down is balanced by the upward pushing force from the floor. Now remove the force from the floor. Yes, this is difficult but it can be accomplished. Just have the elevator accelerate down with the same acceleration as a free falling object. Now you will be falling inside an elevator. The only force is gravity and you will be weightless.

Some people think this falling elevator is fun. That’s why many amusement parks have a ride like The Tower of Terror. Basically, you get in a car that drops off a tower. During the fall, you feel weightless—but you don’t crash at the bottom. Instead, the car is on a track that somehow slows down more gradually than if it smashed into the ground. They have one of these types of rides at the NASA center in Huntsville. went on this with my kids—it was actually scarier than I had imagined.

How about another example? If you are in an airplane and the plane flies with a downward acceleration, everyone inside will be weightless. Even a dog. Check it out.

Here’s how you’ll see it: Some dude is floating around in space (that’s OK) and then he enters the airlock of a spacecraft, still floating. The airlock door shuts and air is pumped into the chamber and boom—he falls to the ground because now there’s gravity.

Here is what it should look like—from the epic movie 2001: A Space Odyssey. SPOILER ALERT: Hal is crazy and won’t open the pod-bay doors. Not even for Dave.

Wow. That scene is pretty much perfect. They even have no sound until the air comes in.

What Happens During Reentry?

Now back to the events in The 100. The scene doesn’t take place in orbit, it occurs during reentry. This is the part where the spacecraft enters back into the atmosphere and encounters an air resistance force (because there is air). Let me start with a simple force diagram showing the spacecraft at some point during this motion.

Clearly, this not weightless. Yes, there is a gravitational force acting on everything—but there is also that air drag force that will make the spacecraft slow down as it moves down. If the human is going to stay inside the spacecraft, there must also be an extra force on that human (from the floor). So, not weightless—in fact, the human would feel more than normal gravity because of the acceleration. You already know this, though, because the exact same thing happens to you in an elevator. As the elevator is moving down and coming to a stop, it is also slowing down. During this time, you would feel a little bit heavier because of the force from the floor pushing on you. You aren’t really heavier, you just feel that way because of the acceleration.

Again, there is another movie example where someone gets this reentry physics right. It’s from Apollo 13. Check it out.

Notice the water falling from the ceiling. In this case, the capsule is moving downward at an angle. However, the air resistance force is pushing in the opposite direction of motion causing the spacecraft to slow down. But what slows down the water? The water does cling to the surface a little bit—but the acceleration is too much to keep it there and it “falls” towards the astronaut. Note that “falling” here doesn’t mean straight towards the surface of the Earth but rather just in the opposite direction as the acceleration.

Looking back at the scene from The 100, here’s how they could fix the scene—and it’s pretty simple. Have the bold floating guy move around before they get to reentry. Then the other guys fall as soon as the spacecraft starts to interact with the atmosphere. That wouldn’t even change the plot—and it would be more scientifically accurate.