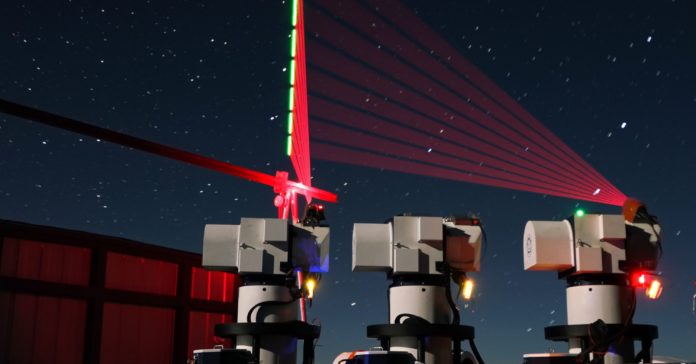 It looked like just another conference call. A panel of suited men sat at a table, large white name tags and water bottles before them. The man in the center, illuminated by fluorescent lights, spoke to a camera in front of him.

“It is such a privilege and thrill to witness this historical moment with you all,” said Chunli Bai, the president of the Chinese Academy of Sciences, on that afternoon last September. His image streamed live to another table of suited men more than 4,500 miles away and six hours behind, at the Austrian Academy of Sciences in Vienna.

The Austrian delegation responded to Bai with their own pleasantries. The mics, cameras, and screens made for a seemingly ordinary—maybe even boring—meeting-by-telepresence. But behind the scenes, physicists were encrypting the videostream using arguably the most secure technology in existence. Bai and his colleagues were participating on the first-ever intercontinental, quantum-encrypted video conference.

And on Friday, the Chinese and Austrian researchers who engineered the call published how they did it in Physical Review Letters. Led by physicist Jian-Wei Pan of the University of Science and Technology of China, the team relied on networks of optical fiber, a handful of encryption algorithms, and a $100 million satellite that China launched in 2016—the only one specifically designed for quantum cryptography. “They’ve demonstrated a full infrastructure,” says Caleb Christensen, the chief scientist at MagiQ Technologies, which makes quantum cryptography systems that connect a small number of users. “They’ve connected all the links. Nobody’s done that with [quantum encryption] ever.”

They got the teleconference set up without a hitch, says physicist Chao-Yang Lu of the University of Science and Technology of China, a long-time member of Pan’s team. “We didn’t overthink it,” says Lu, speaking in his native Chinese. “We thought it could be done.” For months before the teleconference, they’d consistently sent quantum signals between their satellite and the ground stations—the most finicky part of the connection.

The two groups spoke for 75 minutes. The quantum-encrypted connection was robust enough to last a bit longer, but “seventy-five minutes is enough for a conference call,” says Lu.

Quantum encryption, as its name suggests, relies on the quantum properties of photons, atoms, and other small units of matter to secure information. In this case, the physicists used a quantum property of photons known as polarization, which more or less describes the orientation of a photon. For the teleconference, they assigned photons with two different polarizations, to represent 1’s and 0’s. In this way, a beam of light becomes a cryptographic key they could use to scramble a digital message.

If implemented the way physicists first envisioned it back in the 1980’s, quantum encryption would be unbreakable. The protocol is a bit complicated, but it essentially involves the sender transmitting photons to the recipient to form a key, and both parties sharing part of the key publicly. If someone had tried to intercept it, the recipient’s key would not match the sender’s key in a specific statistical way, set by rules in quantum mechanics. The sender would immediately know the key was compromised.

Physicists also see quantum encryption as an important tool for when quantum computers finally become functional. These quantum computers—or more likely, the ones to follow a few decades later—could bust the best encryption algorithms today. But no computer could crack a properly quantum-encrypted message.

Key words: properly encrypted. When physicists started to actually build quantum networks, they couldn’t achieve their vision of perfect quantum encryption. It turns out, sending photons thousands of miles across the world through free space, optical fiber, and relay stations, all without corrupting their polarization, is extremely technically challenging. Quantum signals die after about 100 miles of transmission through optical fiber, and no one knows how to amplify a signal yet. The best quantum memories today can only store a key for a matter of minutes before the information disappears.

So Pan’s group had to incorporate conventional telecom technology to propagate their quantum signals. At several points in their network, they had to convert quantum information (polarizations) into classical information (voltages and currents) and then back into quantum. This isn’t ideal, because the absolute security of a quantum key relies on its quantum-ness. Anytime the key gets converted into classical information, normal hacking rules apply.

But even though they couldn’t replicate the original vision, they’re the first to make an operational quantum network this big. Christensen points out that, save the few classical sections of the network, the quantum network provides security by virtue of its physical structure, not by relying on the trustworthiness of people.

Over the last decade, banks and government institutions in multiple countries including the US, China, and Switzerland have dabbled in quantum encryption products, but Christensen suspects that the technology will be niche for a while longer. Because the technology is so new, the costs and benefits aren’t clear yet.

These demos could help popularize quantum encryption in mainstream industries. Because China has invested heavily in quantum infrastructure, laying optical fiber and launching a satellite, industries there may lead the way. Several banks in China, such as the Industrial and Commercial Bank of China and the Bank of Communications, are already trying it out. It could essentially serve as a quantum armored van, protecting digital cash in transmission.

“A lot of banks will be asking themselves, ‘Could we use this?’” says Christensen. “And once you start getting solid answers—‘It’ll cost this; it’ll be this’—more people will decide, yes, it’s worth it.”

Pan’s group plans to launch more quantum satellites in the next three to five years, says Lu. In addition to replicating their current satellite in low Earth orbit, they’d like to launch a satellite even higher, with a larger range, so they can connect with more distant countries. They’re also working on collaborations with Italy, Germany, Russia, and Singapore. Just what we all wanted: super secret, super long meetings that span the entire world.

The Triumphant Return of the Lord Howe Island Stick Insect

GizmoCrazed - October 10, 2017 0
Jutting out of the Pacific Ocean 375 miles off the coast of Australia is Ball’s Pyramid, the most bizarre island on Earth. It is,...