Rotation of the Earth as seen from the DSCOVR spacecraft, located 1.5 million kilometers sunward of our planet. (Credit: NASA/NOAA)

A while back, I wrote a column for Discover analyzing your place in space: astronomers’ best look yet at where you fit into the big, crazy, cosmic scheme of things. Any discussion of where you are inevitably brings up the related question of not just where you are, but where you are going. And there’s no better time to think about where you are going that at the beginning of the year–right around the time when you realize that, once again, this isn’t going to be the year you keep all your January 1 resolutions.

How to answer the question Where are you going? depends entirely your reference frame. There is no master set of coordinates for the universe (thanks a lot, Einstein), so you can only answer the question by addressing the subordinate question, In relation to what? Fortunately, that’s exactly when things start to get interesting.

Astronomy textbooks typically depict our motion through space in terms of vector arrows pointing in different directions, indicating the direction of Earth’s orbit around the Sun and the like. A recent question on Quora got me thinking about things a different way, however. What if you were suddenly motionless relative to the various cosmic reference frames about you? What would you see and experience if you made yourself the center of the universe, and let everything else move around you?

To make this thought problem work, you will need to add a couple more very important fantasy elements: You have to imagine that you can survive in space without a suit, and that you can pass like a ghost right through the solid body of the Earth if necessary. Caveats in place. Let’s go!

If you were motionless relative to the center of the Earth. In this case, you’d no longer participate in Earth’s rotation. The planet would rotate beneath you eastward at a velocity that would depend on your latitude. Specifically, it would move at 1,674 kilometers per hour at the equator, and at a velocity equal to this rate times the cosine of your latitude everywhere else. At 45 degrees north, for instance, your speed would be 1,184 kilometers per hour, or about three kilometers west every 10 seconds, relative to the spinning globe beneath your feet.

If you were motionless relative to the Sun. Now you would no longer participate in Earth’s orbital motion. Earth would fly past you at 29.8 kilometers per second, on average. The exact speed varies a little over the course of the year, because Earth’s orbit is an ellipse. At sunrise (roughly), your ghostly form would fly straight down through the ground. At sunset (roughly) you would fly straight up into space relative to the Earth.

OK, now get ready for a big leap. 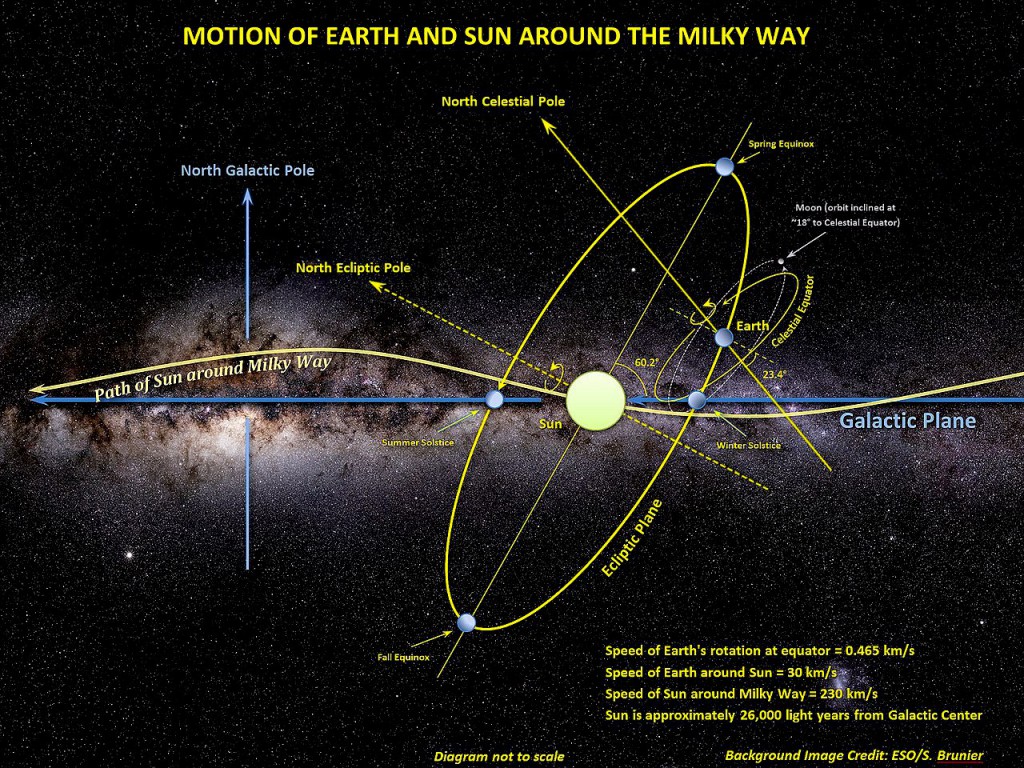 Rotation, solar orbit, and galactic orbit of the Earth, beautifully depicted by JimSlater307 (based on a diagram by ESO/S.Brunier).

If you were motionless relative to the center of the Milky Way (as defined by the supermassive black hole Sagittarius A*).  Things get very disorienting once you are no longer participate in the sun’s orbital motion through our galaxy. Earth would fly past you at about 245 kilometers per second. As if that is not dizzying enough, note that half of the year Earth’s orbital motion would add to this speed, and the other half it would reduce it. To visualize what’s happening, we’re going to need a bigger map: 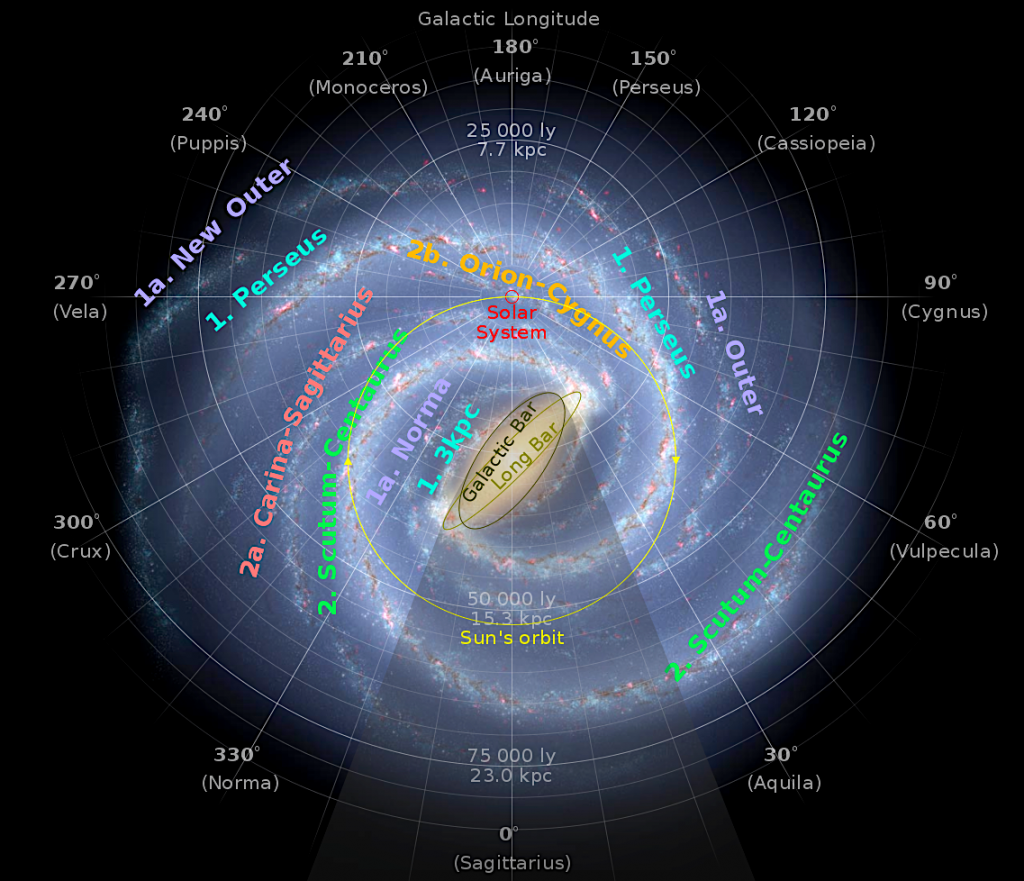 The Sun’s grand orbit through the Milky Way, dragging us all along with it. Look sharp–you are at the little red circle in the center. (Credit: NASA/JPL/R.Hurt/Cmglee)

If you were motionless relative to the Andromeda Galaxy. The Andromeda Galaxy (M31) makes a handy deep-space reference point, since it is is the nearest major spiral galaxy to us. In this case, you would no longer participate in our galaxy’s slow-motion fall toward its larger neighbor. Or not so slow-motion: Our galaxy as a whole is falling that way at about 110 kilometers per second.

That velocity largely lines up with the Sun’s orbital motion around the Milky Way, though, so the net effect is that you’d be left behind at a rate of about 290 kilometers miles per second (plus annual variation from our orbit around the Sun) as Earth and the rest of our solar system hurtles toward Andromeda.

Fun fact: You’d fly off roughly in the direction of Alpha Centauri, but even at this breakneck speed you’d need about 5,000 years to get there.  Space is really, really vast. 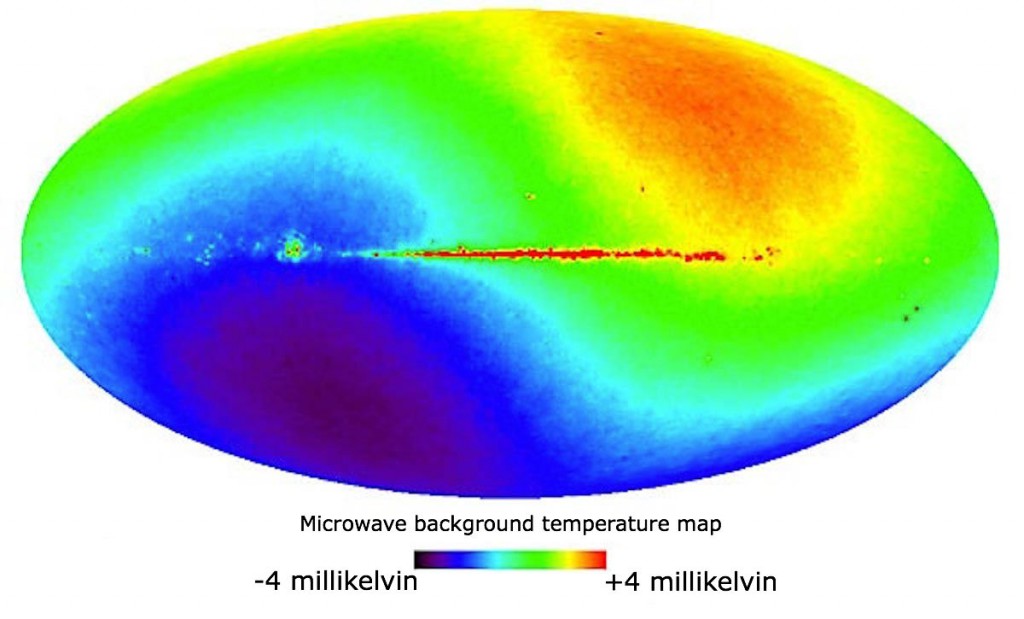 Map of the microwave background shows that half of the sky appears “hotter” than the other because Earth is moving in that direction relative to the background radiation. Technically speaking, the red areas are blueshifted and the blue areas are redshifted…because astronomers are confusing like that (Credit: NASA/WMAP)

If you want to take the most complete version of the question, that is your answer. You’d watch the Earth and the rest of the solar system fly away from you at 371 kilometers per second toward a point near the constellation Leo, falling toward thousands of distant galaxies. After 10 seconds, you would have traveled 3,710 kilometers through the solid Earth or 3,710 kilometers up into space, depending on the time of day. You can look up the current location of Leo in the sky to figure out your path.

Or you could just wait 100 seconds, and by then you would be far off in space no matter which direction you started out relative to the Earth. Per the rules of this imaginary game, you don’t need a space suit. But I hope you brought a flashlight, a good book, and a lifetime supply of snacks.

GizmoCrazed - September 2, 2012 4
We saw it with the iPhone, then with the iPad, and now it's come down to the MacBook Air. Ultrabooks have become all the...

Microsoft and Google’s new pact could signal the beginning of the...