Trophy marks new era for citizen science in the classroom 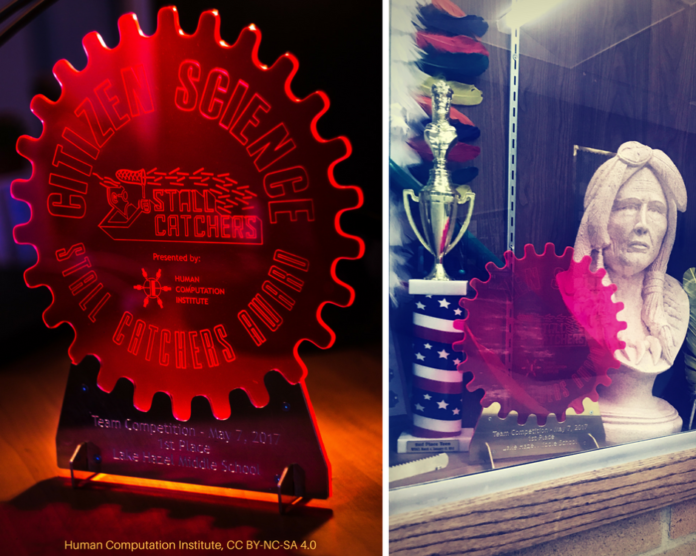 December 21st, 2017, just might enter the history books as the first day a citizen science trophy was ever awarded to a school. The trophy, bestowed to 250 students for contributing to Alzheimer’s research, is now proudly displayed next to sports trophies & special achievement awards at a middle school in Boise, ID.

But the story really begins back in May, 2017. By a happy coincidence, Erin Davis, a technology teacher at Lake Hazel Middle School in Boise, Idaho, saw the first episode of a public television mini-series about citizen science, called The Crowd & The Cloud. Episode 1 featured Stall Catchers, a citizen science game by the EyesOnALZ project that is speeding up Alzheimer’s research.

As it happens, the game was launching its first team competition to #CrushALZ, and, knowing how competitive her students are, Davis immediately signed up. “It fit right into several of the current lesson curricula in my classes,” she said. “I organized a team, challenged my computer students to design the logo, and did a quick tutorial in my class after we finished the daily assignment. It spread from there!”

Starting with 116 students, their team, “Middle School STEM,” grew to a staggering 250 members by the end of the month, and finally triumphed over other Stall Catchers teams from around the world.

“I could see them playing before school, during breaks, at lunch, after school, and so on,” Davis said. “Several of them have sent me emails showing off their high scores and leaderboard standings.” 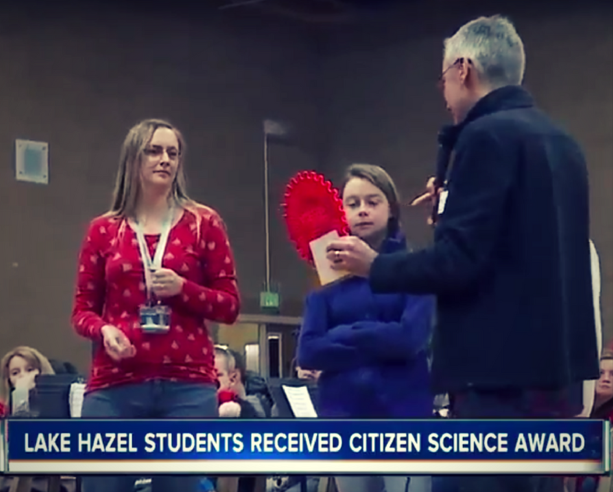 Ms. Erin Davis and her students accepting the Stall Catchers trophy. The event was covered by a local TV station, KIVI-TV (ABC).

In four short weeks, along with other participating teams, “Middle School STEM” helped achieve up to the equivalent of 8 months of research. Amassing this quantity of work in such a short time simply would not be possible without the help of citizen scientists. To honor the students and their teachers for this amazing achievement, the EyesOnALZ team at the Human Computation Institute has just awarded the team with the first ever “citizen science” trophy.

Institute director Dr. Pietro Michelucci traveled to Boise to award the trophy in person during a schoolwide assembly. In his award speech Dr. Michelucci emphasized “the historic significance of coming together, not just as a classroom, but as a school-wide team to demonstrate the collective cognitive power of middle school students.”

“The 250 students at Lake Hazel Middle School, who continue to play Stall Catchers today, have effectively mainstreamed citizen science, showing that anyone and everyone can make a difference in the world today through direct scientific engagement,” Dr. Michelucci said. 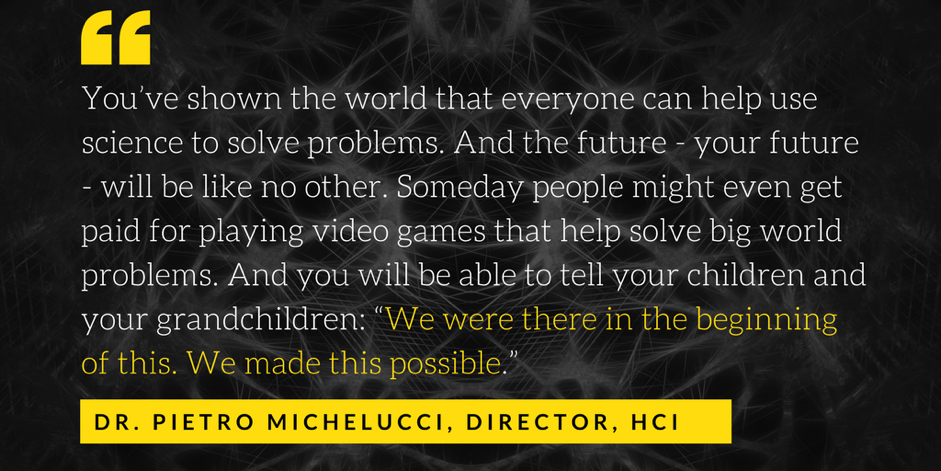 Dr. Michelucci and his team hope this Citizen Science trophy will begin a culture of rewarding volunteer science achievements at schools everywhere. In fact, holders of the first ever citizen science trophy are already thinking about organizing a competition just for schools in Stall Catchers, and establishing a Citizen Science Club at their school.

Looking for ways to get your classroom involved in citizen science? Check out the SciStarter’s Project Finder! Here you can find activities in the “at school” category; filter by indoor/outdoor, topic, location and more.