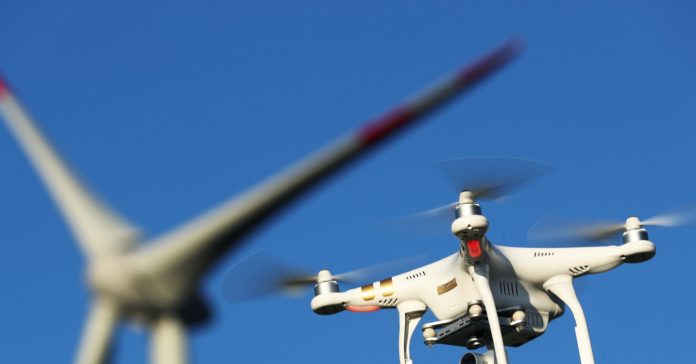 You can get a drone in a wide range of sizes. Some of them fit in your palm (like the Syma X20) while others are quite large. But have you noticed anything about the flying time? Many of the super small drones have flight times that are less than five minutes. The larger drones (like the DJI Phantom 4) have a maximum flight time of closer to a half hour. Why would a larger, presumably heavier drone be able to last longer in the air?

If you want to take a deep look at the physics of drones, you can read how varying the power to four rotors allows the vehicle to fly in every different way. I also looked at the power needed to hover using very basic physics models—a question that actually started with my estimation of the power needed for the SHIELD helicarrier to fly (it’s huge).

Let’s recap how I can estimate the power need to hover a drone. Imagine you have a drone with spinning rotors. It actually doesn’t matter if you have just one rotor (like a helicopter) or four like a quadcopter or even eight like an octocopter. What really matters is that the rotors take stationary air above the vehicle and push this air down. By increasing the momentum of the air, the rotor exerts a force on the air and the air pushes back on the rotor. If this air force is equal to the weight of the vehicle, the drone will hover. This leads to the following expression for the air speed of a hovering drone.

In this expression ρ is the density of the air, m is the mass of the drone, g is the gravitational constant (9.8 N/kg) and A is the area of the rotors. You can see that increasing the size of the rotors means you would decrease the air speed. This is important for the power, which can be written as the following (based on fundamental principles and real data).

Here you can see why bigger rotors are better. If you increase the area of the rotor, you can decrease the air speed—and the power depends on the air speed to the third power. If you want have a low power drone, you need to keep that air speed as low as possible.

I just need one more thing—the definition of power. Power is the rate at which something uses energy. This can be described with the following equation.

If the energy is measured in Joules and the time interval in seconds, then the power would be in units of Watts. So a drone with a large power will need a bigger battery in order to fly for a reasonable amount of time.

Now for the fun stuff. Let’s look at the battery size and power for two drones. I am going to randomly pick the Syma X20 and the DJI Phantom 4. I’ll start with the Phantom. It has a listed mass of 1.38 kg and the rotor radius is about 12 cm. This gives it a rotor area of about 0.18 m2. Using the equations above, I get a hovering power of around 150 Watts. In order to reach its listed flight time of 28 minutes, the battery would need to have a total energy of 2.5 x 105 Joules (compared to a listed power of 2.9 x 105 Joules). OK, two quick notes. First, the DJI battery is listed at 15.2 volts with a capacity of 5350 mAh (milli-amp hours). There is a small trick to convert this to Joules, but it’s not too hard. Second, I should point out that my energy estimation is super close to the listed energy even though I derived that based on basic assumptions.

But what about the tiny drone (the Syma X20)? It has a rotor area of 0.0043 m2 and I’m going to guess a mass of 100 grams (the specs list it at 250 grams, but I think that is for the remote as well). Using these values, I get a hover power of just 19 Watts. That’s not much power, but if it were to have the same runtime as the Phantom (28 minutes) it would need a battery that would have 3.2 x 104 Joules—just about 1/10th the energy of the bigger drone. This seems like it would be OK since the mass of the smaller drone is also about 1/10th the mass of the larger drone. However, there is one big difference—the mass of a battery itself.

Most of the drones have a lithium ion battery. These have a specific energy (the energy per mass) of around 5 x 105 Joules per kilogram. So, to have a battery with 3.2 x 104 Joules of energy it would have a mass of 60 grams. That would leave just about 40 grams for other stuff that might be important—like a camera, a controller, a radio, oh—and motors and stuff. And that is the problem. These small drones have to save mass for other important stuff that just can’t get any smaller. The sacrifice for small drones is a short flight time—at least for now.