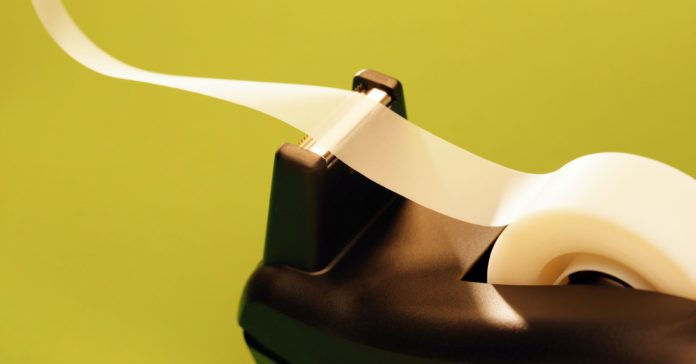 When you wander around the internet, sometimes you can find some crazy stuff. Check this out: It’s an old account of a weird phenomena created by giant plastic sheets at 3M Corporation. In short, these fast-moving, electrically-charged plastic sheets created some type of effect that prevented humans from passing through an invisible wall. It sounds a lot like some type of force field, right? I’m honestly skeptical that this is real, but let’s just assume that it actually happened. If so, there are some parts of this that show some cool physics that I know are real—and even better, some of this you can try at home.

Can you electrically charge stuff with plastic?

Yes, this is possible. It’s called the triboelectric effect and it’s what you see when your socks get a electrostatic charge after being in the dryer. The basic cause is through frictional contact between two different materials—but there’s probably something a little different going on here.

It turns out that pulling apart (not just rubbing) two materials can also create a separation of charge. Here is a simple demonstration of this effect that you can do at home. Get some clear sticky tape (really any brand will probably work). Pull off a piece of tape from the roller—make it about 10-20 cm long (a little longer than a pencil). Fold one end of the tape over itself so that you make a little “handle” on the top. Now stick this tape onto some hard surface—like a table. If you want you can write a label on the handle of this tape. Write something like “L” for lower. Next repeat this with another tape about the same size and place it on top of the “L” tape. Write “U” on the upper tape for upper.

After putting the two tapes on top of each other, pull them up from the lower tape so that they are still together. You should have something that looks like this.

You are ready for the physics. Grab the two tapes by their handles and pull them apart rapidly. Like this.

Boom. You just made two tapes with opposite electric charges—you can tell because the two tapes are now attracted to each other. But what is happening? I’m not 100 percent sure, but essentially when the two tapes are ripped apart, some electric charges (probably electrons) are attracted more to one tape than to the other tape. This leaves one of the tapes with excess electrons and an overall negative charge and the other tape with a deficiency of electrons and an overall positive charge.

If you make another set of tapes (another U-tape and another L-tape), you can see something even cooler. What happens when you bring two U-tapes close together? The two U-tapes have the same electrical charge so that they repel.

When two objects repel, they have to have the same charge. But when objects attract, it doesn’t necessarily mean they have opposite charges. However, it is quite clear that you can get tapes (or plastics) to have an excess electrical charge. The sticky tape version of electrical charging is great since it works well even when the air is humid.

One part of the crazy 3M invisible wall story is that it somehow pushes back humans. This invisible wall could not just be caused by excess (even super-charged) plastic. The problem is that electric charges can attract neutral objects, but they can not repel them.

Let’s start with a demonstration. Take one of your electrically charged tapes (it doesn’t matter which one) and also tear up some paper into tiny pieces (you just need a few). Put the torn-up paper on your table and then bring your charged tape over them. Here’s what happens.

The charged paper attracts the neutral paper. It’s pretty awesome if you think about it—oh, and it should work with either tape. Go ahead and try it.

The only way to get two objects to be electrically repulsed is by having them the same charge. So something else must be going on with the weird 3M invisible wall.

What about ionized air?

Here is the theory from Bill Beaty to explain the 3M invisible wall: Maybe the sheets of plastic produced ionized air that created the wall. Ionized air is just molecules of oxygen or nitrogen that either have an extra electron or lost an electron to make them electrically charged. This charged air could then be repelled by the parts of the plastic with the same charge and attracted to the opposite charge plastic. Beaty’s theory is that this ionized air could somehow be trapped in a particular location near the 3M plastic. This trapped ionized air would then create a air pressure differential that would act as an invisible wall. It’s just so crazy, it might work.

There is something even crazier you can do with sticky tape

This doesn’t really have anything to do with charges or walls—the only connection is that we are still talking about clear tape. Apparently you can use the tape to make X-rays. Yes, it’s true. But don’t worry, you aren’t making X-rays every time you pull off a piece of tape. In order to get this to work, you need to peel tape off the roll while in a vacuum—and then boom, X-rays.

This would be a cool challenge. See if you can build a device that pumps air out of a container and then uses sticky tape to make X-rays. Perhaps follow this up with some dental X-ray film to create an image of something cool. It would be difficult, but I think it’s possible.

23andMe Is Suing Ancestry Over Some Pretty Ancient IP

GizmoCrazed - June 2, 2018 0
Heredity is so hot right now. In 2017, the number of people who who’ve had their DNA analyzed for the purposes of tracing their...