You can’t swing a cat in the Bay Area without hitting some startup accelerator or another, but it can be hard to find one with a mission. That’s the easy part with the Ocean Solutions Accelerator, a new program that aims to help advance startups in tech and conservation relating to… you guessed it, the big blue. They’re now accepting applications for their first wave of companies this summer.

The accelerator is part of the nonprofit Sustainable Ocean Alliance, whose CEO and founder Daniela Fernandez I met at TechCrunch Disrupt SF in September. It was in the plans then, and the program was announced shortly afterwards, but only now is the team ready to open it up to applications.

If you’re working on a device, service, platform, or anything that you think could help protect or improve our oceans, but it needs a bit of love and expertise, this may be a great opportunity. 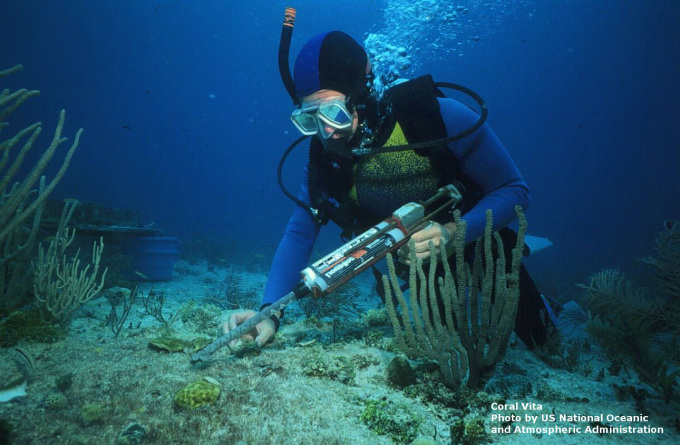 An example of an ocean-focused tech startup: CoralVita, which grows and transplants healthy corals.

“We believe that young entrepreneurs have the creativity, optimism and ambition needed to tackle some the greatest threats facing the planet,” said Fernandez in the press release announcing the new accelerator. “Our generation understands that sustaining the health of environment is not only a moral responsibility but also an opportunity to create profitable businesses capable of revolutionizing our world.”

It’s a 12-week program running from June to August, making it a good option for students and other academics who might have a busy schedule otherwise; the SOA has generally been youth-focused, so it makes sense that the accelerator would accommodate that.

Group photo from a recent SOA summit event. They look like they’re having fun.

The plan is, like other accelerators and incubators, to “help entrepreneurs at the idea or prototyping phase build their products,” as co-founder Craig Dudenhoeffer put it. But having a specific category, market, or in this case biome in mind helps make the mentoring, connections, classes, and so on much more effective.

The SOA has built up an international group of academics, startups, government officials, and other useful contacts, many of which will be brought into play, either as part of the curriculum or in the audience on demo day (August 30th — put it on your calendar).

Starting today, you ocean-lovers out there have one month (until February 17, in other words) to submit your company, product, or idea to the accelerator for consideration for the 10 slots available. They’re hoping to judge submissions by March, in time for the Economist’s World Ocean Summit.

Equity is of course the currency of the age, and the Ocean Solutions Accelerator is little different here: selected startups will receive an initial equity investment to cover the costs of moving to the Bay Area for the duration of the program, and the opportunity for a further $150K investment is also on the table for those motivated to seek it.

My favorite part of the press release is the valuation of the ocean. I’m used to hearing this in pitches — mobile apps are a however many billion dollar market and so on. But this takes the cake:

Valued at 24 trillion dollars and being the world’s largest source of protein for more than 3 billion people, the ocean supports global industries such as fisheries, tourism, shipping, and offshore energy.

$24 trillion, you say? Maybe it is worth saving after all. Would be a shame to leave so much cash on the table.

Scooting while drunk is a dangerous, lame way to get a...

Get Your Whole Desktop In One Piece With “Dell XPS One...