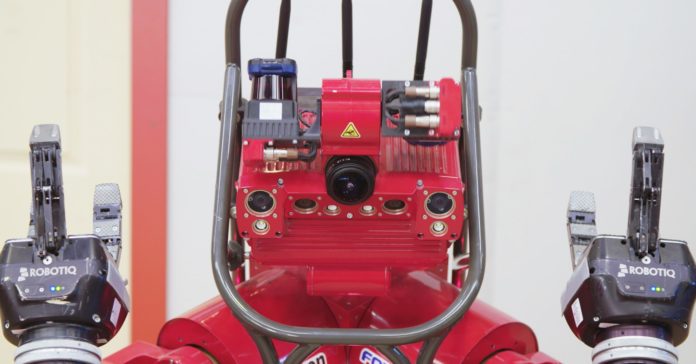 Even in retirement, Chimp the robot’s still got it. The giant red humanoid crouches down like a Transformer to roll on all fours, then stands up and slowly approaches a door. It sees its world by coating it in lasers, allowing Chimp to reach for the handle, delicately turn it, and roll through the entry.

Two and a half years after Chimp competed in the Darpa Robotics Challenge, it remains one of the weirdest humanoid robots on Earth. But that weirdness is Chimp’s strength. It’s a glimpse into a future that’s teeming with machines you’d never expect. And really, to a large degree those machines have already begun to arrive.

Chimp was born at the National Robotics Engineering Center at Carnegie Mellon, the product of just 13 months’ work by a team of 30 humans. They pieced it together specifically for the Robotics Challenge which … challenged roboticists to construct humanoids that could tackle a disaster situation. They’d have to navigate an environment built for humans, turning valves and climbing ladders and even driving a cart.

But Chimp didn’t look like its peers—hulking machines that walked, usually poorly, like humans. “We didn’t really feel that walking was strictly necessary,” says Mike Vandeweghe, lead robotics engineer at CMU. “So we sought to design something that would be more stable over rough terrain.” Specifically, something that could roll around, then stand up to free its upper limbs to manipulate objects.

Such are the liberties of biomimicry. You’re more than welcome to replicate how a human looks and moves as closely as possible. But maybe that’s not the best way to go about things. Balancing on two legs is both technically difficult and energy intensive. So Chimp just avoids the problem entirely, transforming itself into a quadruped to roll around on super-stable tank treads.

Which is not to say that a robot walking on two legs won’t have a place in this world. For instance, Boston Dynamics’ Atlas humanoid—which was also developed for the Darpa Challenge—has literally grown in leaps and bounds over the last two and a half years. It can now jump from box to box, then do a backflip off a ledge. Not that that would do it any good in a rescue situation, necessarily. But dexterous bipeds will certainly serve some purpose.

And really, they’re closer than you might think. A bipedal robot called Cassie is for the time being just a pair of legs, but its creators hope the robot will be a workhorse that schleps goods where wheeled robots can’t. Up stairs and across uneven terrain, for instance.

Cassie the robot may look like a disembodied pair of birds legs, but that’s just coincidence.

Like Chimp, Cassie is interesting because its designers didn’t set out to explicitly mimic something in nature: Its creators only set out to mathematically model the most stable and efficient form they could manage. What they ended up with just so happened to look a lot like a disembodied pair of ostrich legs.

So, there are lots of ways for a humanoid robot to get around. And if Cassie’s ostrich legs or Chimp’s treads leave them lacking some core capabilities, well, it’ll be OK. Because roboticists are embracing an idea called multiplicity, in which robots work closely with humans. That’s in contrast to the singularity, in which hyper-advanced AI take over the world and mistreat humanity.

Chimp is what you might call a semi-autonomous machine. It sees its world with stereo cameras and builds a map by coating its surroundings in lasers, so during the Darpa Challenge it could do things like cut a hole in a wall on its own. “But for other higher-level things, for driving the vehicle, for navigating through the course, we left that up to the human,” says Vandeweghe. “Chimp’s operation really is a partnership between the robot and some limited autonomy and then a human in the loop making the higher-level decisions.”

That partnership is key, because for the moment, and for a long while to come, robots are going to need our help. Security robots and robot nurses are already joining the ranks of human employees—but that doesn’t mean they’re ready to take care of themselves. There are even call centers now where humans answer distress calls from trapped robots, taking command of their systems and guiding them out of trouble.

Will a humanoid one day explore disaster zones like melted-down nuclear reactors? Perhaps. But good luck convincing Chimp to come out of retirement for that.

GizmoCrazed - March 31, 2016 0
A group of scientists in Europe want to know if electronically enhanced humans have an unfair advantage over regular people - beyond night...

Zone7 raises $2.5 million seed round to predict injury risk for...

Man Sued Pepsi After Finding A Mouse In His Mountain Dew,...

Two Satellites Almost Crashed. Here’s How They Dodged It