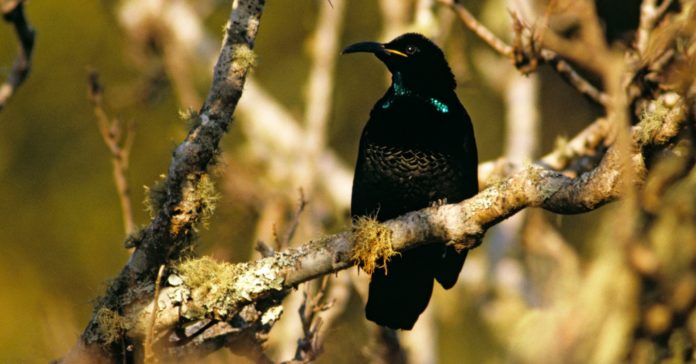 The mating dance of the male superb bird of paradise is like nothing else on Earth. To win the affection of a female, he forms a sort of satellite dish with his body, revealing an entrancing band of blue. He jumps about like this, clicking in the face of the rather drab female, who appears simultaneously intrigued and horrified.

Other species of birds of paradise may vary in their plumage and tactics, but they share something remarkable: their black feathers. OK, maybe not remarkable at first glance, but a study out today in the journal Nature Communications reveals that those feathers absorb 99.95 percent of light. That’s nearly none more black, and virtually identical to the 99.965 percent of light that Vantablack, the world’s darkest artificial substance, can absorb. And it’s all thanks to black feathers structured like a forest of chaos.

The black feathers of the male bird of paradise eat light. Which again, metal. That’s because unlike your typical bird feather, which is more or less neatly structured with branches that branch off of branches, kind of like a fractal, the bird of paradise feather looks like an irregular forest of trees (see the image below for a comparison).

This leads to a whole lot of cavities in the feather. “Light strikes the feather, and is repeatedly scattered within these cavities,” says Harvard evolutionary biologist Dakota McCoy, lead author of the paper. “Each time it scatters, a little bit is absorbed, so that’s how they become so black.” (Nitpicky thing I should probably mention: The feathers absorb 99.95 percent of directly incident light, meaning light coming from straight ahead, where the female would be standing. When it comes to light from all sides, the figure is more like 96.86 percent.) Which is particularly odd because human-made super-blacks rely not on chaos, but strict patterning of structures.

A comparison of a normal feather, top left, and a feather from a paradise riflebird, top right. The bottom panels are the feathers coated in gold. Notice how the riflebird’s still appears a deep black.

This is known as structural absorption, and it’s fundamentally different from how pigment works in the animal kingdom. A pigment on, say, a parrot, absorbs certain wavelengths of light and reflects others, manifesting as color. The idea behind the structural absorption of the bird of paradise’s super-black, on the other hand, is light keeps bouncing around the “forest” of structures, absorbing and absorbing.

The male bird of paradise takes things to the next level for a very good reason: sex. Let’s return to the example of the superb bird of paradise and its dance of seduction. The little prince of darkness creates that satellite dish with his wings, revealing a striking band of blue set against that striking black. This blue is also a structural color, though in this case it’s structural reflection, not absorption. So it bounces light around the structure to give a sort of sheen that changes depending on the angle. Again, this is different from straight pigment in that pigment reflects or absorbs certain wavelengths of light without all the bouncing around.

“The whole point, we think, of these feathers is to trick her eye and brain into thinking that there’s less light illuminating the male than there really is,” says McCoy. “So to her eye, when her world is an incredibly dark black background and then a vivid blue spot, the spot looks even brighter, and it even looks like it’s glowing.” It may even look like it’s floating in space.

This delicate dance isn’t about hubris—it’s about sexual selection. The male puts on his show because females can afford to be picky about who they mate with. The debate over why this evolved is still a contentious one, but it may have been that long ago, nice feathers were an indication that a bird of paradise male was healthy and parasite free. Females picked the highfalutin males, and an arms race ensued, with males developing ever more ostentatious displays. So it may be that these days, a male with super-black feathers and a pretty blue band isn’t necessarily more healthy. It might be that he’s bluffing. Which would all explain why females are so drab—this isn’t an adaptation to, say, camouflage better at night, otherwise you’d expect both sexes would rock it.

What’s curious is why we don’t see these kinds of feathers more often among birds. After all, absorbing almost all the photons that hit the feathers can in a sense make a bird invisible. “It may be that it really affects the waterproof-ability of those feathers, it may be that it’s more costly to produce those feathers,” says Jack Dumbacher, curator of ornithology and mammalogy at the California Academy of Sciences. “There must be some kind of downside. Maybe they wear out more quickly and have to be replaced more often.”

Clearly, though, evolution has deemed super-black feathers to be useful for the bird of paradise, which means they may well be useful for humans too. Because the black magic of the bird of paradise feather literally goes deeper. McCoy and her team imaged the feathers with a scanning electron microscope, but with this technique the electron beam tends to electrostatically charge specimens and mess with image quality. So they had to ground the feathers.

“We blasted it with gold so that we could look at it under a microscope,” says McCoy, “but then we noticed amazingly that it still looked black even though we had put a 5 nanometer layer of gold over the entire surface.” The super-black feather, it seems, just won’t quit being super black.

Which could be great news for materials science. Super-black materials made in the lab rely on regularity to scatter light—a bunch of tiny cones, for instance, one after another across a surface. That’s like precise and elegant classical music compared to the bird of paradise’s metal-as-hell method. So maybe engineers can embrace that chaos to create new materials out of keratin, the same stuff that makes up feathers (and your hair and nails, by the way). Especially since traditional super-black materials tend to be fragile.

“Feathers are really robust, they’re hard to break, and they’re made of this super cheap thing,” says McCoy. “So if we can easily 3-D print or some other simple cheap way of manufacturing this, I think it could be useful.”

So metalheads, rejoice. New super-black materials may be headed your way, thanks to the sexual adventures of the bird of paradise. Which if it isn’t the name of a metal band out there, it should be.