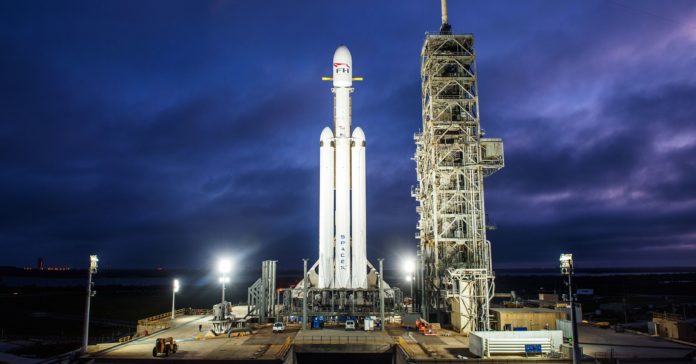 The long-awaited Falcon Heavy rocket roared to life on Wednesday at 12:30 pm Eastern, as SpaceX fired up the 27 Merlin engines that power the triple-booster rocket at Kennedy Space Center. Perched atop what CEO Elon Musk claims will be the most powerful lift vehicle in the world is the billionaire’s Tesla Roadster, which will launch toward a Mars elliptical orbit on the Falcon Heavy’s upcoming maiden flight.

The firing lasted a whopping 12 seconds, creating a mountain range of exhaust plumes that surrounded the facility and rattled the space coast with over 5 million pounds of thrust power. A loud rumbling lasted most of the firing, capped by a giant boom.

SpaceX rolled out the Falcon Heavy to Launch Complex 39A earlier this month in advance of the test fire, amidst reports that SpaceX’s previous satellite delivery, Zuma, may have not made it to orbit. (The Air Force has since confirmed that the company is not responsible.) The Falcon Heavy remained at 39A over the last two weeks, as SpaceX planned and then pushed back the test, day by day.

First, sensors picked up an issue with ground equipment during a dress rehearsal. Then further delays pushed the static fire to January 19, but SpaceX competitor ULA first had to launch a mission for the Air Force from a nearby pad at Cape Canaveral. When that launch was scrubbed, SpaceX was pushed and then delayed again due to the government shutdown. No launch providers can operate at the Cape without personnel and assistance from the Air Force’s 45th Space Wing—who finally returned to work after after President Trump signed a bill on Monday ending the government shutdown. Soon after, sources confirmed that SpaceX would run a full wet dress rehearsal on Wednesday at pad 39A followed by a static fire of the Falcon Heavy.

Launch Complex 39A has a legacy of hosting the world’s most powerful rockets—at least the most powerful of their eras. The Saturn V was launched from the pad with the crew of Apollo 11, and later would host flights of the Space Shuttle program. But because previous vehicles were primarily test-fired elsewhere, Cape Canaveral has never seen a hold-down fire as powerful as the one conducted with Falcon Heavy.

The engine test was contained to pad 39A’s flame trench, built to withstand the acoustics, heat, and vibration produced by the rocket. (SpaceX compared the Falcon Heavy’s power to that of 18 Boeing 747s taking off at the same time.) Musk claims that the world’s next-most powerful rocket, the United Launch Alliance Delta-4 Heavy, is dwarfed by the Falcon Heavy’s capability by a “factor of two,” and SpaceX advertises as much on their website. According to ULA, the Delta-4 Heavy can generate up to 2.13 million pounds of thrust at liftoff.

Musk has been publicizing the Falcon Heavy since 2011, when he unveiled plans for the rocket at a press conference in Washington, DC, floating the idea that SpaceX could launch as soon as 2013. But development delays, a failure of the Falcon 9 during a NASA launch in 2015, and the disaster at Pad 40 in September 2016 set the company’s plans back.

After leasing what Musk calls the “Times Square” of launch pads, SpaceX built a large hangar at the base of Launch Complex 39A to house its boosters and began manufacturing a new strongback—the device that transports, erects, and launches rockets—that could manage the 230-foot-tall Falcon Heavy. The facility also required upgrades to electrical systems and the water-based sound suppression system to accommodate the enormous vibration created by a heavy-lift vehicle.

Last summer, at the ISS R&D conference in Washington, Musk attempted to manage expectations for the Falcon Heavy’s maiden flight, which is planned before the end of the month. Simply not destroying Pad 39A would be a “win” for SpaceX, he said, let alone making it to orbit. Even just firing the Falcon Heavy’s 27 engines was going to be complex despite its makeup of proven hardware. “It actually ended up being way harder to do Falcon Heavy than we thought,” Musk said. “At first it sounds real easy. You just stick two first stages on as strap-on boosters. How hard can that be? But then everything changes.”

The Falcon Heavy demo vehicle is comprised of a brand-new central core booster and two previously flown Falcon 9 boosters. About eight minutes after the rocket’s anticipated liftoff from pad 39A, if all goes according to plan, SpaceX hopes to fly back the core booster to Of Course I Still Love You, a robotic landing ship parked in the Atlantic ocean. The two side boosters will be flown back almost simultaneously to Cape Canaveral for touchdowns at Landing Zone 1 and the newly completed Landing Zone 2. The event will be a reminder of the Space Shuttle era when loud back-to-back sonic booms jolted Cape Canaveral during both launch and landing.

Following what SpaceX hopes will be a successful demonstration of the Falcon Heavy, the company has four listed missions flying atop the rocket on its manifest. Three are relatively routine satellite deliveries that could have been launched on the ESA’s Ariane-5 and the ULA Delta Heavy. And one the Air Force notably decided to take a risk on by purchasing a still-untested Falcon Heavy for their STP-2 satellite bundle launch. The Planetary Society, founded by Carl Sagan and now headed by Bill Nye, will fly its Lightsail 2 spacecraft as a secondary payload on the Air Force’s mission. How will a Falcon Heavy mission differ from one flown on a Falcon 9? Far heavier payloads going to geostationary orbit––over 22,000 miles above Earth’s surface—and beyond. The Falcon Heavy can lift 50,000 pounds to that destination, 37,000 to Mars, and a little under 8,000 to Pluto according to SpaceX.

“While Falcon 9 can accomplish the vast majority of space industry missions, Falcon Heavy will round out all the possibilities for launching spacecraft into LEO, GTO, and beyond—including planetary exploration like Europa or Mars,” explains Phil Larson, a former White House and SpaceX communications official. “It will give NASA and the Pentagon more options for accomplishing their missions for less, and will open up the possibilities for missions that previously were thought unachievable.” That is, if it can launch at all.

GizmoCrazed - May 16, 2019 0
(Credit: Monkey Business Images/Shutterstock) Don’t get a big head, your mother may have told you. That’s good advice, but it comes too late for most...

Top 10 Most Powerful Women On The Planet