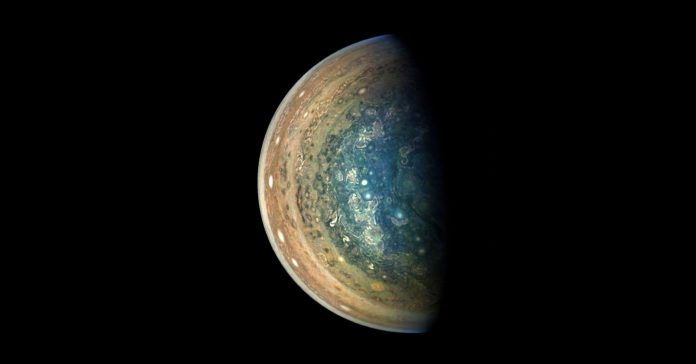 Say hello to Jupiter’s south pole! The Juno spacecraft snapped this photo during its tenth orbit around the planet, all while speeding at over 100,000 miles per hour. The cyclones and storms in this image are highlighted in false color, and while they might appear lovely and small—they’re not! Some of these storms are bigger than entire continents on Earth.

What is this alien landscape? This is Saturn’s largest moon, Titan. A hotbed (coldbed, really) of alien chemistry, this moon is covered with lakes and rivers—but not like we have here on Earth. Titan is covered in lakes mixed with methane, ethane, and nitrogen, which is what we see here in this image of Titan’s second largest lake, Ligeia Mare.

Are you gobsmacked? Believe it or not, this is Jupiter, the same planet whose south pole we just flew under. In this mind-blowing photo, Jupiter’s famous bands are on full display. Textures in the cloud tops highlight the depths of the storms—some that go many miles below the upper atmosphere. Juno took this photo on December 16, during its most recent orbit.

This glittering image is of galaxy cluster Abell 1758. This massive cluster was first discovered in 1958 (hence the last two numbers in its name) and was first thought to be a single cluster—just an especially large one. It wasn’t until scientists took another look 40 years later that they realized it was actually two clusters. Each one contains hundreds of galaxies, and while they seem so quaint and illuminating in this image, these two massive clusters are just beginning to merge together.

Welcome to globular star cluster NGC 3201. From this distant vantage point, the cluster almost seems like one single star, speckled with the dust of starlight around it. The European Southern Observatory captured this photo as a part of its Digitized Sky Survey 2, an atlas of the sky that astronomers use to study the stars. We’re still so far away—let’s get a bit closer!

That’s better. Now that we’ve zoomed in on cluster NGC 3201, we can begin to make out the specks of individual stars. Clusters like these, some of the oldest known objects in the universe, contain millions of stars. This particular cluster is 16,000 light years from Earth and is so large its mass is equivalent to 254,000 times that of our sun.

It’s Hubble’s turn to spy on NCG 3201. This close up image, taken by the Hubble Space Telescope, appears almost as though the camera is inside the cluster of stars. We’re now close enough to see the color of stars: blue, white, and orange. Just this week, scientists using the Very Large Telescope in Chile discovered a black hole in NGC 3201—the first stellar mass black hole found in a cluster of this kind.