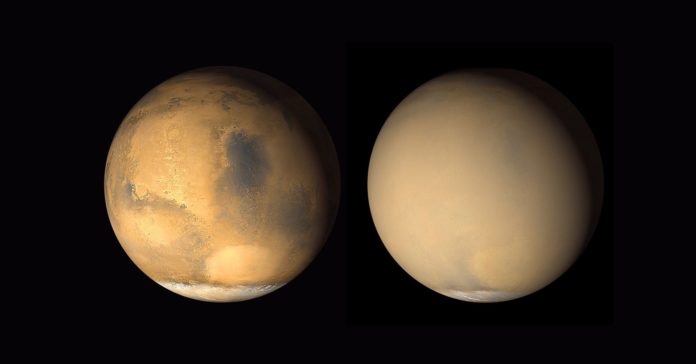 This week belongs to darkness, both Mars- and moon-related. Over on Mark Watney’s home away from home, there’s a storm a-coming: The Red Planet is dusty, covered with sandy dunes like many of the deserts on Earth, and its weather system is known to kick up a lot of that fine material. One of those big global dust storms is expected to hit sometime in 2018, potentially lasting through early 2019.

And that spells trouble for the actual Martian, the Opportunity Rover, which has been exploring the rusty planet for 14 years. Unlike the Curiosity rover, which gets its power from a plutonium-powered generator, Opportunity is solar powered. If enough sunlight is blocked by the dust, Oppy might have to enter hibernation mode and ride out the storm. While it has managed to survive previous dust storms, the upcoming 2018-2019 storm could be the one that puts the brakes on it for good.

The moon itself will go dark this week, at least from our perspective. On January 31, the Earth, the sun, and the moon will get in line, causing what NASA is calling a ‘super blue blood moon.’ (Yes, the term is kind of overblown; it really just means an eclipse that makes the moon kind of reddish). Those on the west coast of the United States will be treated to the best show, starting at 6:07am PST. Scientists will be watching, too. They use lunar eclipses to study the geology on the moon, determining if the material on the surface is larger stones or lunar dust. That rocks.

Not done traveling through the cosmos? Check out the full collection of space photos here.

4 Ways That Technology Has Impacted Education

Nokia introduces a new sleep sensor that works with IFTTT