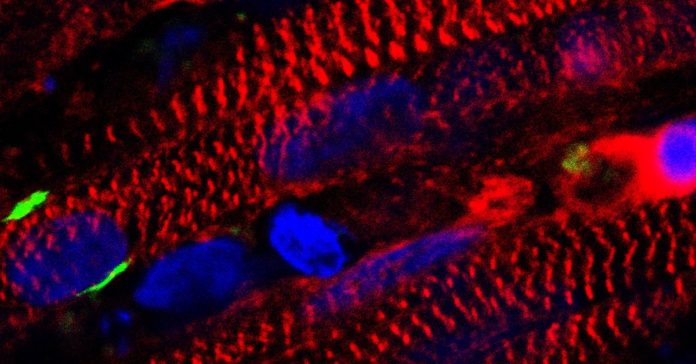 For the past several years, Nenad Bursac has been trying to make muscles from scratch.

A biological engineer at Duke, Bursac came close in 2015, when his lab became the first to grow functional human skeletal muscle in culture. “Functional” being the operative word. Like the muscle fibers in, say, your bicep, the tissues could contract and generate forces in response to things like electrical pulses and shots of chemicals.

But to produce the tissue, the researchers had to isolate their starting materials from pea-sized globs of muscle, which they sliced from human test subjects. The lab was, in effect, growing muscle from muscle. It was a significant accomplishment, but also kind of a letdown: Biopsied cells don’t proliferate well in the lab, so producing a large, consistent supply is difficult. What’s more, Bursac is interested in developing models of muscular disorders (muscular dystrophies, for example). But for the 2015 study, his lab sampled healthy tissues; sampling it from someone with a muscle-wasting disease, he says, would be unethical.

“In a lot of people with rare, congenital diseases, their muscles are already damaged, so you don’t want to biopsy on top of that and cause further damage,” Bursac says. “The ideal scenario is to take a skin, blood, or urine sample, use that to generate stem cells, and use that to generate functional muscles.” In other words: Reprogram skin or blood cells to act like undifferentiated stem cells.

Now, Bursac and his team have done exactly that. In the latest issue of Nature Communications, the researchers describe for the first time how to transform skin cells into functioning human muscle. Their method will make it easier than ever for researchers to study muscle and muscle-based therapies—and could one day form a basis for stem cell and transplantation therapies.

Bursac’s team used pluripotent stem cells derived from human skin cells, which they genetically programmed to express large quantities of a protein called Pax-7. It can reprogram a single stem cell into what’s known as a myogenic progenitor cell—an intermediate cell that, under the right conditions, can eventually become a mature, contracting muscle cell.

But cells are small. To make an individual muscle fiber, you need a lot of them. It takes Bursac’s team about five weeks to convert a single stem cell into about a thousand myogenic progenitors (after which, Bursac says, it’s fairly easy to scale to millions or even billions of cells). The researchers then load those progenitor cells onto a cylindrical scaffold of gel made of fibrin, the same stuff that helps your blood clot. It gives the cells a surface on which to align and complete their transformation into unified bundles of muscle fiber.

To verify that the fibers could function not just in culture but in live tissue, Bursac’s team transplanted their three-dimensional muscle bundles into adult mice. Through small, glass windows implanted in the mice’s backs, the researchers were able to watch their home-spun tissues not just survive but integrate with the rodent’s natural muscles. “The cells express a protein that flashes whenever calcium signalling is active in the cell,” Bursac says. “When the cells light up, we can see that the muscle is alive and active.”

And also, Bursac hypothesizes, capable of self-repair. The lab-grown fibers also developed a special reservoir of cells that muscles can draw on to regenerate after exercise or injury. The researchers’ previous efforts to produce muscle fibers from biopsied tissues had produced scant reserves of these cells; the new method, in contrast, produces a rich supply.

The newly grown tissues aren’t perfect. Bursac’s homespun muscle fibers appear less mature than ones they’ve produced from the biopsy technique, and generate less force than the real thing. Still, he’s confident his lab and others will be able to use the tissues to design new disease models—and perhaps, one day, gene- and regenerative-therapies.

“Having a mature muscle culture system like this could make it a lot easier to study muscles and study therapies,” says University of Washington geneticist Jeffrey Chamberlain, who is working to develop gene and cell therapies to correct and treat muscular dystrophies and was unaffiliated with the study. In the past, researchers like him have had to work primarily with animal models. “So it’ll advance the field by improving basic testing, but there’s also potential to use this in the future, for therapeutic stem cell transplantation.”

All that, from a handful of skin cells. Who knew home grown muscles could hold so much promise?

A New Twist on Invisible Ink

GizmoCrazed - November 1, 2017 0
With many of us spending our time online, we tend to be laser-focused on preventing our personal information from falling into the hands of...

20 Things You Didn't Know About … The Year in Science