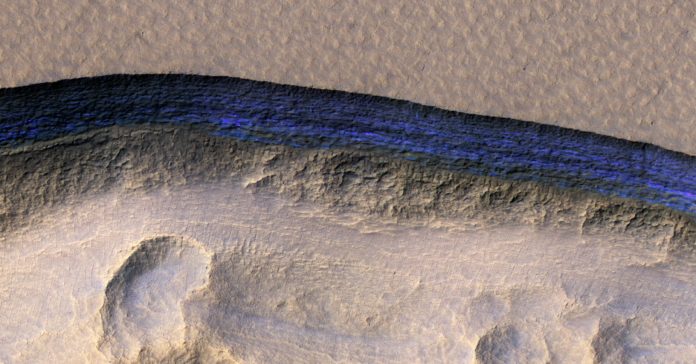 Locked away beneath the surface of Mars are vast quantities of water ice. But the properties of that ice—how pure it is, how deep it goes, what shape it takes—remain a mystery to planetary geologists. Those things matter to mission planners, too: Future visitors to Mars, be they short-term sojourners or long-term settlers, will need to understand the planet’s subsurface ice reserves if they want to mine it for drinking, growing crops, or converting into hydrogen for fuel.

Trouble is, dirt, rocks, and other surface-level contaminants make it hard to study the stuff. Mars landers can dig or drill into the first few centimeters of the planet’s surface, and radar can give researchers a sense of what lies tens-of-meters below the surface. But the ice content of the geology in between—the first 20 meters or so—is largely uncharacterized.

Fortunately, land erodes. Forget radar and drilling robots: Locate a spot of land laid bare by time, and you have a direct line of sight on Mars’ subterranean layers—and any ice deposited there.

Now, scientists have discovered such a site. In fact, with the help of HiRISE, a powerful camera aboard NASA’s Mars Reconnaissance Orbiter, they’ve found several.

In this week’s issue of Science, researchers led by USGS planetary geologist Colin Dundas present detailed observations of eight Martian regions where erosion has uncovered large, steep cross-sections of underlying ice. It’s not just the volume of water they found (it’s no mystery that Mars harbors a lot of ice in these particular regions), it’s how mineable it promises to be. The deposits begin at depths as shallow as one meter and extend upwards of 100 meters into the planet. The researchers don’t estimate the quantity of ice present, but they do note that the amount of ice near the surface is likely more extensive than the few locations where it’s exposed. And what’s more, the ice looks pretty damn pure.

NASA calls the use of space-based resources “in-situ resource utilization,” and the agency thinks it will be essential to survival in deep space. Of particular interest to ISRU planners is the depth of the ice, and the ratio of pure ice to that mixed in with bits of Mars regolith. The more pristine the ice, and the closer it is to the surface, the less energy it takes to extract and use.

The ice found this time isn’t crystal clear. Over years, observations showed that the ice is slowly surrendering water to the atmosphere through a process called sublimation, and signs suggest that boulders and sediment are dislodging from the ice as it recedes. But some debris is to be expected. Dundas and his colleagues hypothesize that the ice originated as snow, falling in waves over millions of years. Some rocky material probably found its way in, in between snow events—but the surrounding ice, the researchers think, is relatively clean.

“On Mars, when you see something bright, it usually means ice,” says Richard Zurek, chief scientist for the Mars Program Office at NASA’s Jet Propulsion Laboratory, who was unaffiliated with the study. Most of the material on Mars reflects little light, “but the albedo readings on these exposed sections show that this is very bright stuff,” he says. “And the spectrometer readings support that this is water ice and not ice-cemented soil, which would be much harder to convert into water as a resource.”

Now, don’t pack your bags for Mars just yet. The eight sites Dundas and his colleagues observed were all located at upper mid-latitudes, between 55 and 60 degrees north or south of the equator, where temperatures can drop extremely low. Most Mars missions, though, restrict their landing sites to within 30 degrees of the equator—as would future crewed missions to the planet’s surface, most likely. As Zurek puts it: “If you wanna stay warm, it’s better to be in Hawaii than Alaska.”

But that close to the equator, warmer temperatures could drive subsurface ice reserves deeper into the ground, where they’ll be harder to get to. “So that’s something you’ll want to follow up on and investigate before you put your base down,” Zurek says.

Plans to do so are already in the works. “I’m sure we haven’t found all of the exposures at this point,” Dundas says, and more could certainly exist closer to the equator. NASA’s Mars 2020 rover is equipped with a ground-penetrating radar that could allow it to probe the mysterious upper layers of the planet’s surface. The European Space Agency’s ExoMars rover, also slated for a 2020 launch, will come outfitted with a drill designed to sample geology at depths of up to two meters.

Another option: artificial meteors. Scientists imagine sending spacecraft to hitch a ride through Mars’ atmosphere on larger vehicles, only to break off at low altitude and collide with the planet. They’d land with enough impact to bury themselves a few meters into the planet’s surface, detect the composition of the area around them, and relay their observations back to Earth by way of satellites in Mars orbit. “That one, the technology’s not quite there yet, but it’s rapidly developing,” Zurek says.

Fortunately, scientists still have some time to pinpoint Mars’ reservoirs of water ice. Humans will likely return to the moon before they venture into deep space. Optimistic timelines put our arrival on the Red Planet some time during the 2030s. Where we land, how long we visit, and what we bring along will all depend on the resources that await us—and how hard we’ll have to work to get them.