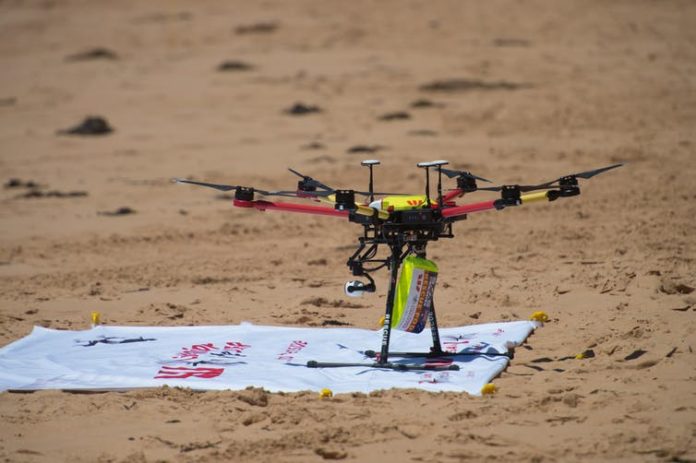 Last week’s sea rescue of Australian swimmers by an Unmanned Aerial Vehicle (UAV) is just the start of a robotics revolution.

On January 18, an Australian lifeguard piloted a drone over the turbulent ocean off the far north coast of New South Wales to rescue two teens in distress. As thrilling as it was to watch a tiny drone drop a flotation device to the two struggling swimmers, the rescue was relatively easy, using proven robotic technology in an ideal, wide-open environment.

Drones and UAVs have been used in search and rescue (SAR) situations around the world for more than a decade. They have searched for victims inside collapsed buildings, collected disaster data, detected dangerous materials and conditions, and deployed first aid kits.

But the unmanned robotic systems we use today operate under severe constraints: They need a human to remotely steer the device or a strong GPS signal and open spaces to allow auto-piloted maneuvering.

First on the Scene

These robots don’t need to be smaller, more powerful, heat- or collision-resistant, contain more sensors or have better user interfaces. The real challenge for robotics researchers is to develop unmanned rescue robots that are capable of making independent decisions and have the ability to work unsupervised in confined, chaotic spaces.

In the future, rescue drones will be the first on scene, scouring beneath collapsed buildings or looking for plane wreckage in the thick forest, seeking survivors that might otherwise take days to reach. 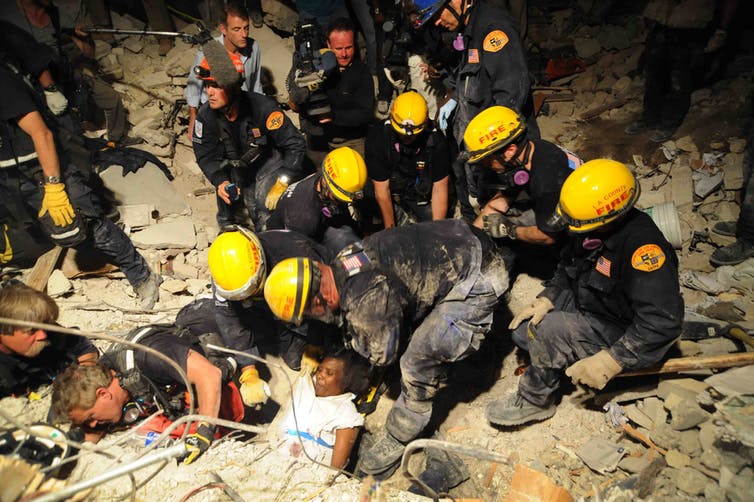 A search and rescue team from Los Angeles County pulls a woman from the rubble following the catastrophic earthquake in Haiti in 2010. (Credit: U.S. Navy)

The challenge for roboticists is to create unmanned vehicles that can adapt to unforeseen situations using previously acquired information and limited available resources.

We won’t see the widespread deployment of Search and Rescue (SAR) robots until researchers find ways to improve the robots’ ability to move in confined spaces and boost their self-awareness, giving them the tools to recognize the intent of any given mission in unforeseen conditions.

As a professor at the University of Calgary’s Schulich School of Engineering and the CEO of 4Front Robotics, I am developing technology and systems to enable and facilitate the use, deployment and further design of cost effective, highly maneuverable fast disaster response robotics.

A key focus of our research is to develop UAVs that can respond rapidly to urban disasters such as quickly locating victims in collapsed buildings following an earthquake.

Unmanned ground, submarine and aerial vehicles can save lives, respond to disasters faster and contain an emergency situation more quickly than traditional techniques and tools.

If UAVs and robots had been available to search the site, more people might have been saved. In a typical collapsed building incident, it takes rescuers an average of five to eight hours to inspect the site to make sure it is safe to look for victims. UAVs and robots could shorten the delay.

Robots were first used in urban SAR after the World Trade Center attacks in 2001. These devices had primarily been developed for the military or other applications, but several remote-controlled and tele-operated unmanned robotic systems bolstered the search and recovery efforts.

They searched for paths in the rubble that would make it faster for rescue workers to excavate, search for victims and assess the building’s structure.

Robots provided the needed quick response, and they were able to assess the site’s hazardous conditions that put the lives of rescuers, including the fire department, police and other personnel, at great risk. Despite this, the robots were not able to penetrate the depths of the building’s complex spaces, due to their limited mobility and the complexities of guiding them with a joystick.

We’ve made great advances in robotics in the past 15 years. Drones can now be equipped with autopilot systems and vision systems that recognize people. They can identify dangerous situations such as the presence of explosive gases, and carry sensors that pick up geometrical features and humidity levels. They can identify objects buried within the rubble.

The military is especially interested in developing highly maneuverable, flying UAVs with robotic arms that can navigate highly confined spaces and interact directly with their surroundings.

For example, traditional drone systems such as helicopters and quad-rotors cannot perform the pitch-hover maneuvers that would allow them to take off from, or land on, sloped mountain surfaces or vessels in rough seas.

In the future, these vehicles will be able to interact with the environment, collecting samples, moving debris and providing medical assistance or victim assessment.

To be truly useful, these systems must gain some independence. They must be able to modify their operations as they gather new information, yet follow and cooperate with humans at all times.

We’ll need better artificial intelligence (AI) tools to get to that point. Only then will rescue robots learn to solve problems in the absence of data or human experience. Enhanced AI will enable robots to move themselves throughout their operating environment with minimal human assistance and to self-adapt in novel and groundbreaking ways.

We need robots that can adapt their locomotion style automatically. They must be able to walk, run, roll, crawl, climb, jump, fly or swim, in response to changing environmental conditions.

These tools will also ensure that autonomous robots can deal with unexpected situations or tasks that challenge their sensing, modelling, planning or movement capabilities.

In the future, robots will have to be able to change their shape, geometry and movements based on the perceived terrain or task.

Due to its design, the UAV that found the swimmers in Australia isn’t able to fly for more than 20 to 30 minutes or reach a distant location quickly — and still make it home. The limited battery power, small carrying capacity and a lack of adaptability in current SAR robotic devices severely limit their application.

We need disaster response robots that can hover like helicopters, rapidly transition to high speed flight and penetrate challenging environments. These, along with humanoid SAR robots that use tools (power drills, hydraulic spreaders and shears and pick axes), are currently under development and will be a game changer.

They will assist the responders and the victims, and reduce costs in ways we have yet to discover.