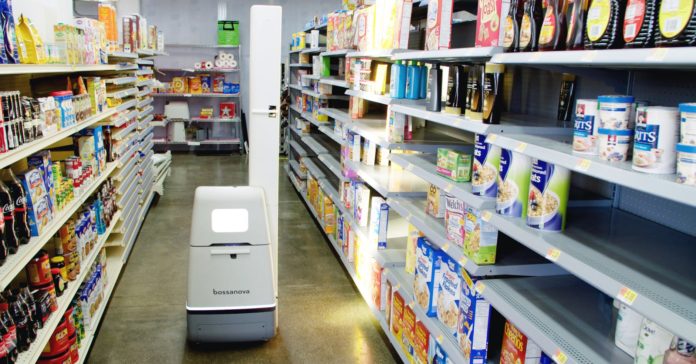 If you think shopping is tedious, try juggling 200,000 products in a Walmart. Not literally, of course, but somehow keeping the shelves stocked over an area of tens of thousands of square feet. For that you need a worker with a barcode scanner and an enviable amount of patience.

Or you could unleash a hard-working robot from a company called Bossa Nova. At over six feet tall, it roams the aisles, blasting shelves with light and snapping photos. In two minutes, it can image 80 feet of aisle, capturing a whopping 2 terabytes of raw data scanning a 100,000-square-foot-plus store. That makes it one of the first truly intelligent robots to work alongside humans in complex ways outside of a factory.

Other than city streets, it’d be hard to think of a more difficult environment for a robot to navigate than a store. The machine has to be able to not only autonomously roam the aisles, but dodge workers and step stools and customers suddenly stopping or pulling U-turns with their carts. Just look around you the next time you’re in a busy grocery store. It’s chaos.

Bossa Nova’s robot navigates with lidar, meaning it sprays the world with lasers to build a map. The machine will of course stop and wait if it comes across a human, and will make the decision to reroute if it encounters something that won’t be moving any time soon, like a new display.

All the while, the robot is snapping photo after photo of the shelves, both with 2-D and 3-D cameras. The robot complements this data by scanning the shelves with lidar. “We look at the depth of the shelves, so we’re able to see whether a product is fully stocked, completely out of stock, or some level of depletion in between,” says Martin Hitch, chief business officer of Bossa Nova. The robot also checks to make sure the products are arranged in the right order. A human worker (store associate, in corporate-speak) then uses this information to do the actual restocking.

But why would the robot stop there? Why wouldn’t it also help with the stocking? Well, because there are a lot of things humans are still better at than robots. Manipulation is a huge challenge in robotics, because we live in a human world designed to work with human hands. Just think of the range of products in a Walmart—all those different shapes and sizes and weights. Any robot would struggle mightily to manipulate them all.

That is, for the time being. Researchers are getting robots to handle more and more objects with greater confidence. A startup called Kindred, for instance, is developing a system where a robot learns two ways how to best grasp an object: by imitating a human and by teaching itself through trial and error, known as reinforcement learning. The idea is for the robot to tackle the range of items that you’d find in an order fulfillment center, where the stuff you buy online is sorted into boxes.

Really, if brick-and-mortar stores are going to survive online retailers, they’ll need all the help from robots that they can get. Amazon alone employs 100,000 robots in its warehouses to ferry items to humans, who then place the products in boxes. But it’s only a matter of time before robots get good enough at manipulation to handle the whole process on their own.

More immediately, Bossa Nova’s machine is wandering a strange new frontier: Humans aren’t quite sure how to interact with robots. “We have people that will want to come up and ask questions,” says Hitch. “What is it doing? How does it work?” Kids tend to take a particular interest, which isn’t ideal for a robot with a job to do.

And then there’s the other end of the spectrum—the haters. “We have witnessed a couple of people walk past and just kick it,” says Hitch.

The thing is, robots are here to stay. And more and more, you’ll be interacting with them, whether at the store or at work (or both at the same if you’re a Walmart employee). And no one is going to blame you for getting confused or curious or flustered around robots. “I think in general that maybe society is ready for this,” says Bob Doyle, vice president of the Robotics Industries Association. “There’s always concern, there’s consternation when new technologies come in.”

But please, no kicking the robots. You’d hate for them to remember such things.