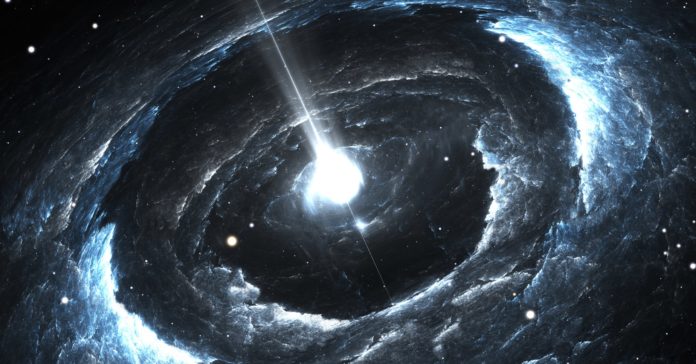 Half a century ago, astronomers observed their first pulsar: a dead, distant, ludicrously dense star that emitted pulses of radiation with remarkable regularity. So consistent was the object’s signal that astronomers jokingly nicknamed it LGM-1, short for “little green men.”

It wasn’t long before scientists detected more signals like LGM-1. That decreased the odds that these pulses of radiation were the work of intelligent extraterrestrials. But the identification of other pulsars presented another possibility: Perhaps objects like LGM-1 could be used to navigate future missions to deep space. With the right sensors and navigational algorithms, the thinking went, a spacecraft could autonomously determine its position in space by timing the reception of signals from multiple pulsars.

The concept was so beguiling that, when designing the gold plaques aboard the Pioneer spacecraft, Carl Sagan and Frank Drake chose to map the location of our solar system relative to 14 pulsars. “Even then, people knew that pulsars could act like beacons,” says Keith Gendreau, an astrophysicist at NASA’s Goddard Space Flight Center. But for decades, pulsar navigation remained a tantalizing theory—a means of deep space navigation relegated to space opera novellas and episodes of Star Trek.

Then, last week, Gendreau and a team of NASA researchers announced that they had finally proven that pulsars can function like a cosmic positioning system. Gendreau and his team performed the demonstration quietly last November, when the Neutron Star Interior Composition Explorer (a pulsar-measuring instrument the size of a washing machine, currently aboard the International Space Station) spent a weekend observing the electromagnetic emissions of five pulsars. With the help of an enhancement known as the Station Explorer for X-ray Timing and Navigation Technology (aka Sextant), Nicer was able to determine the station’s position in Earth’s orbit to within roughly three miles—while it was traveling in excess of 17,000 miles per hour.

But pulsar navigation’s greatest benefits will be felt not in low-Earth orbit (there are better, more precise ways to track spacecraft as local as the ISS), but farther out in space. Today’s deep space missions navigate using a global system of radio antennas called the Deep Space Network. “The DSN gives really good range information,” says Gendreau, who served as principal investigator on the Nicer mission. “If you know the speed of light and you have highly accurate clocks, it can can ping these spacecraft and infer their distance with very high precision.”

But the DSN has some major limitations. The farther away a spacecraft gets, the less reliable the DSN’s location measurements become; the network can detect distance just fine, but struggles to determine the spacecraft’s lateral position. Far-flung missions also take longer to deliver radio waves to ground-based satellites, and more time to receive instructions from mission planners here on Earth, reducing the speed at which they can react and operate by minutes, hours, or even days. What’s more, the network is quickly becoming oversaturated; like an overburdened WiFi network, the more spacecraft that chart a course for deep space, the less bandwidth the DSN will have to split between them.

Pulsar navigation stands to address all of the DSN’s shortcomings, particularly its bandwidth issues. A spacecraft equipped to scan the depths of space for pulsar beacons could calculate its absolute position in space without communicating with Earth. That would free up transmission capacity on the DSN, and buy valuable time for executing maneuvers in deep space.

“It all comes back to the A-word: autonomy,” says NASA’s Jason Mitchell, an aerospace technologist at Goddard and project manager for the Sextant project. When a spacecraft can determine its location in space independently of infrastructure on Earth, “it lets mission planners think about navigating in places they wouldn’t otherwise be able to navigate,” he says. Pulsar navigation could allow spacecraft to perform maneuvers behind the sun, for example (signals to and from the DSN cannot cut through our parent star). In the more distant future, missions at the fringes of our solar system and beyond—in the Oort cloud, for example—could perform maneuvers in real time, based on self-determined coordinates, without having to wait on instructions from Earth.

But pulsars aren’t the only way to find one’s way in the distant solar system. Joseph Guinn—a deep-space navigation expert at NASA’s Jet Propulsion Laboratory who is unaffiliated with the Nicer project—is developing an autonomous system that could use cameras to detect objects, using their positions to determine a spacecraft’s coordinates. He calls it a deep-space positioning system (DPS for short), and it works by detecting reflections from space rocks in the asteroid cloud orbiting between Mars and Jupiter. (Those reflections mimic the function of the Global Positioning System, the network of satellites orbiting Earth at a height of 12,540 miles.) Its killer feature is that it can tell a spacecraft where it is relative to an object of interest. Pulsar navigation, by contrast, can only tell a spacecraft its absolute position in space. Think of it this way: Pulsar navigation can tell you where you’re at inside your office building, while DPS can tell you that your boss is standing right behind you.

Target-relative measurements notwithstanding, DPS has its drawbacks. Just like GPS, DPS becomes less reliable once you’re above it. “If you get sufficiently far out in the solar system, and you can’t see anything because the light is so diminished, then you might find yourself in a position where pulsar navigation is the only game in town,” Guinn says. After all, he says, pulsars all exist far, far outside our solar system; “you don’t have to worry about getting up above those.”

The ideal solution would be to equip spacecraft to execute multiple forms of navigation: transmitters and receivers for communicating with the Deep Space Network here on Earth; a deep-space positioning system; and a high-precision sensor like Nicer for detecting and timing the arrival of pulsar emissions in deep space. If the DSN is overwhelmed, or if the spacecraft needs to navigate autonomously in real-time, the DPS can take over. Too dark for DPS? Pulsar nav can grab the baton. When one system fails or is pushed beyond its limits, another can relieve it of its duties.

There’s a big need for this redundancy in critical systems like navigation. “The nice thing about pulsar navigation is it functions very independently of all other methods of navigation, which could be hugely valuable,” Gendreau says. That’s probably why, according to him, mission planners have expressed interest in including pulsar navigation aboard NASA’s Orion spacecraft, which will be designed to carry humans deeper into space than any vehicle in history. (Guinn says that a plan to make Orion capable of deep-space positioning is also in the works, and that SpaceX, too, is “very interested in it.”)

The challenge, when it comes to redundancy, will be finding space for all this equipment. On space missions, every ounce counts. More weight requires more fuel, and more fuel requires more money. The Nicer observatory, alone, is the size of a washing machine. If pulsar navigation wants to earn a place aboard deep space transports, it’ll need to shed a few pounds.