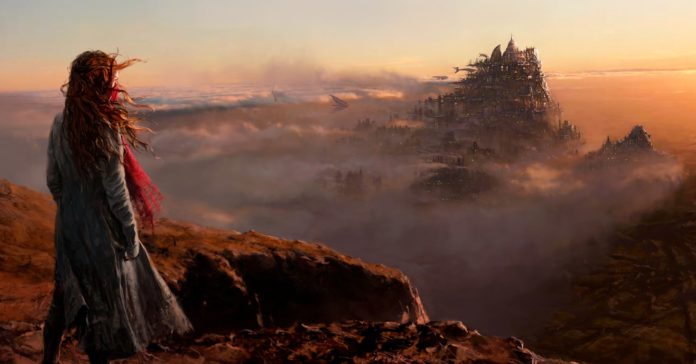 Next December, there’ll be a new entrant into the end-of-year, blockbuster science fiction movie category: the Peter Jackson film Mortal Engines. A teaser trailer for it dropped just before the holidays, and there’s really only one thing you need to know about it. Driving cities. Driving cities!

Now, I know the movie is based on a book series, which probably has a lot of detail about these giant ambulatory dwellings. But I like to try and see what I can figure out just from the trailer itself. So let’s get into some off the wall estimations. It’s what I do!

How Big Are the Cities?

Now, the first driving thing we see in the trailer looks more like just a few buildings. I would hardly call that a city—but no matter what it’s called, I need to estimate the size of this thing so that I can use it to calculate the driving speed.

If I assume that these are normal buildings on top of the moving thingy, then I can use the building size as my scale. Typically, one story level is about 3 meters (even Wikipedia says so) which means that the part of the vehicle that looks to be about four stories (just a guess) would be 12 meters tall. I can then use something like Tracker Video Analysis to measure the other dimensions.

Here you can see I get a height (from the ground to about the top) of 25.18 meters with a width of 23.21 meters. Clearly this is not exact. You can change the estimate of the story height (or even the number of stories) to get a different value. However, it is probably going to be from about 18 to 30 meters wide. There’s no way it would be something like 100 meters wide—that’s just not plausible. Yeah, I know, I just said “plausible” in a discussion about giant driving cities.

What about the giant driving city of London? Here is a view of both the smaller city right in front of London.

From this, I get a width of the London thingy to be about 489 meters. That’s big, but it’s still pretty small for a city.

But wait! There’s another way to get an estimate for the size of this driving city—at least for the smaller one. At one point in the trailer, this giant vehicle jumps off a cliff. It looks pretty cool—but I can also use this get the size. I need to assume two things: First, that this movie takes place on Earth with Earth-like gravity and a vertical acceleration of 9.8 m/s2. The second assumption is that the giant vehicle drives off the cliff with an initially horizontal velocity.

If both of these assumptions are correct, then the city starts with an initial vertical velocity of 0 m/s and falls down some height. I can estimate this falling height based on the falling time by using the following kinematic equation (this version only works for zero initial velocity in the vertical direction).

In this equation, y0 is the starting height and g is the vertical acceleration. By looking at the video, I get a falling time of about 0.54 seconds. Putting this value in for t, I get a cliff height of around 1.4 meters. Sure, this height depends on the falling time—which is sort of difficult to find. But even if the fall time was 1 second, the drop would only be about 4.9 meters high. So, it’s not a super big drop.

Looking back at the video, this drop height might be somewhere around half the total height of the driving city. That would put the height at anywhere from 3 meters to 10 meters (I guess I don’t really need to point out that this is a significantly smaller estimation than before). So I’m just going to stick with my first size value.

How Fast Are They Moving?

Now that I have a size estimate, I can use this scale to plot the motion of the smaller moving city as seen from above. Here is a plot of both the x and y-motion during that time.

Based on the slopes of these two lines, I can get the average x and y-velocity for this clambering thing and the magnitude of the average velocity. From this, I get an approximate speed of 26.4 m/s (or almost 60 mph). Yes, that’s pretty fast for a driving city. Although, come to think of it, I’ve never seen a driving city. Maybe this is OK.

I still don’t really know what this movie is all about, but there are still some interesting questions left. I am going to leave some of these as the following homework questions.

GizmoCrazed - July 6, 2018 0
Smart speaker maker Sonos has filed to go public. In the filing, the company says it’s aiming to raise up to $100 million in the...

With Big Data and Predictive Analytics, Scientists Are Getting Smarter About...