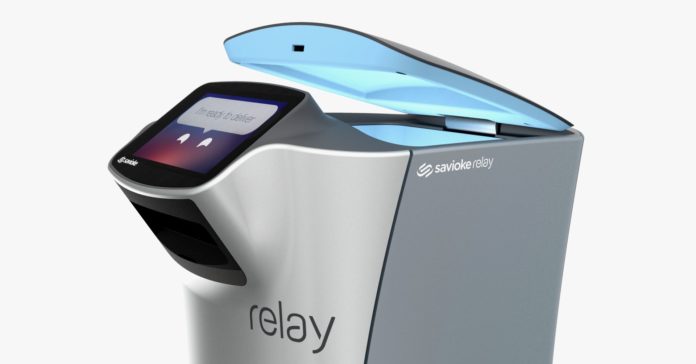 Book a night at LAX’s Residence Inn and you may be fortunate enough to meet an employee named Wally. His gig is relatively pedestrian—bring you room service, navigate around the hotel’s clientele in the lobby and halls—but Wally’s life is far more difficult than it seems. If you put a tray out in front of your door, for instance, he can’t get to you. If a cart is blocking the hall, he can’t push it out of the way. But fortunately for Wally, whenever he gets into a spot of trouble, he can call out for help.

See, Wally is a robot—specifically, a Relay robot from a company called Savioke. And when the machine finds itself in a particularly tricky situation, it relies on human agents in a call center way across the country in Pennsylvania to bail it out. When Wally makes the distress call, a real live human answers, takes control of the robot, and guides it to safety.

Wally’s job may seem inconsequential, but it signals just how close we are to the robot revolution. The machines are finally sophisticated enough to escape the lab and the factory, where they’ve long lived, and venture into our everyday lives. But for all their advances, robots still struggle with the human world. They get stuck. They get confused. They get assaulted. Which is giving rise to a fascinating new kind of job that only a human can do: robot babysitter.

The first companies to unleash robots into service sectors have been quietly opening call centers stocked with humans who monitor the machines and help them get out of jams. “It’s something that’s just starting to emerge, and it’s not just robots,” says David Poole, CEO and co-founder of Symphony Ventures, which consults companies on automation. “I think there is going to be a huge industry, probably mostly offshore, in the monitoring of devices in general, whether they’re health devices that individuals wear or monitoring pacemakers or whatever it might be.” Self-driving cars, too. Nissan in particular has admitted that getting a car to drive itself is hard as hell, so it wants humans in the loop.

Which might sound, well, a bit dystopian: vast rooms packed with humans devoted exclusively to tending to the whims of robots. But it’s actually an intriguing glimpse into the nature of work in a robotic future, and the way humans will interact with—and adapt to—the machines.

Save Your (Manufactured) Skin

Curiously, Relay has sourced its robot call center to a company called Active Networks, which operates traditional call centers. Which meant the people who do this work had to get new training to interact with the machines. In fact, they still get recurring training. And periodically they get together to discuss issues they run into. “This was not an easy task, as if we are preparing to take phone calls,” says Marcus Weaver, who manages call center operations at Active Networks. “We had to change our agents’ mindset and get them use to handling the request via a portal instead of someone call over the phone.”

These sitter jobs, though, may be fleeting. A robot call center is a stopgap. Robots aren’t ready to be independent just yet, but that doesn’t mean they won’t be down the line. “I can completely see that eventually we’ll reach a point where we don’t need the humans in the loop,” says Tessa Lau, CTO of Savioke, Relay’s maker. The idea here isn’t to fashion a future in which humans tend to forever-inept robots—the idea is to get them into the real world with a little bit of help. “We’re experimenting with this new technology that’s sort of the first of its kind,” says Lau. “We’re still getting the kinks out, we’re still making Relay more reliable, more autonomous.”

The stakes here are of course fairly low—no one’s life is in danger if their room service is a bit delayed. But another robot named Tug, made by Aethon in Pittsburgh, plays a more sensitive role as a hospital worker. It delivers drugs to doctors and nurses, as well as linens and food. Tug is meant not as a replacement for staff, but as an increasingly important coworker that frees up time for workers to do the human stuff, like talking to patients.

Still, though, Tug can get stuck in such a chaotic environment, so a command center in this case provides peace of mind for the client. “We didn’t have the luxury of time to wait for the culture to change in order for people to want to adopt autonomous vehicles,” Aethon’s Peter Seiff told me when WIRED visited their HQ in November. “So we built this backend into the system where we can make customers comfortable that they were being watched, even though they made the leap of faith with us that they could have autonomous vehicles running within their facility.”

Can’t We All Just Get Along?

Not everyone agrees to be watched by the bots, though. Late last year, one of Knightscope’s security robots was patrolling around the San Francisco SPCA when a group setting up an encampment allegedly attacked it.

“When you’re living outdoors, the lack of privacy is really dehumanizing after awhile, where the public’s eyes are always on you,” Jennifer Friedenbach, executive director of San Francisco’s Coalition on Homelessness, told WIRED in December. “It’s really kind of a relief when nighttime comes, when you can just be without a lot of people around. And then there’s this robot cruising around recording you.”

The question of privacy grows all the more complicated when you get sitters peering through a robot’s cameras from afar. A human interacting with a security robot might rightly assume that they’re being recorded, but what they might not know is that Knightscope staffs a human call center 24/7 to monitor the robots. Who, exactly, is watching? (Savioke’s Relay robot, for its part, takes video in what you might consider public places like the lobby and hallways, but blurs video when it approaches a guest’s door, lest it witness something no robot or human needs to see.)

When there’s a human behind the scenes, robots start to have an image problem. The value of a service robot, at least in part, is its impartiality. It lives to serve, in a specific capacity—just for you, dear client. But a call center calls that presentation into question. How much control does the sitter have? And at what point does the robot start to take on its sitter’s human personality?

Savioke ran into this problem early on. “The concern that we had was that we’re trying to create a particular character that Relay has,” says Lau. “He’s friendly, he’s helpful, he’s polite. If you open the door to having our call center arbitrarily create behaviors for Relay, like putting text on the screen, we can’t necessarily control everything that people will type in.”

Savioke eventually decided to restrict what the sitters had power over. “They can send him on a delivery, they can drive him around in a limited form to get his bearings again, but we decided not to allow them to sort of puppeteer him because he’s really not a remote-controlled toy,” says Lau.

It’s an interesting twist on what’s known as human-robot interaction, a matter so complicated that it’s spawned an entire academic field. How should robots anticipate our movements, for example? How do you design robots to subtly telegraph what they’re capable of? And now with robot call centers, how does the dynamic change when the human is thousands of miles away from the robot they’re interacting with and controlling?

“Ideally, you should be able to interact with the robot at some higher level interface, guiding its higher level actions to get unstuck or remedy the situation,” says Anca Dragan, who studies human-robot interaction at UC Berkeley. “What these high level actions ought to be is an open question.”

Also an open question are the psychological effects of operating a robot from afar. Consider drone operators, who can develop PTSD even though they’re sitting comfortably behind a computer monitor. Not that the sitters looking after Relay and other robots are in danger of doing the same, but there are interesting psychological implications here. For instance, could being so far disconnected from the machine encourage unethical behavior?

We’re certainly about to find out. Sure, the job of the robot sitter may be fleeting, as the machines grow ever more sophisticated. Like children, robots grow up, and then the babysitter is out of a job. But for certain bots, a human may always be there—ready to come to the rescue.

GizmoCrazed - January 25, 2018 0
It’s no secret that Facebook is big on both AR and VR, both for entertainment and communication purposes. And new research suggests it is...