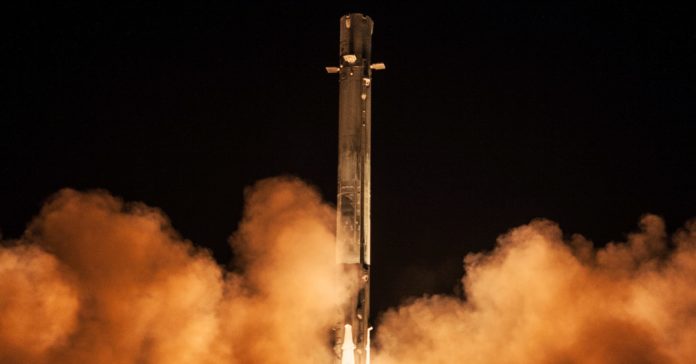 After months of launch delays, the clandestine spacecraft built by Northrop Grumman finally launched on Sunday evening on board a SpaceX Falcon 9 rocket. The mission, code-named Zuma, lifted off from Cape Canaveral at 8:00 PM Eastern, headed toward an unknown destination in low Earth orbit. But it may not have made it there.

On Monday, SpaceX was already preparing for its next big launch from the Cape, rolling its triple-booster Falcon Heavy rocket out to pad 39A at Kennedy Space Center for an imminent static fire. But just hours later, rumors of Zuma’s failure began to circulate. In a tweet, reporter Peter de Selding of Space Intel Report said sources claimed that Zuma was “dead in orbit.” It was unclear who was responsible—the launch provider or the customer.

In a report, the Wall Street Journal cited unnamed government and industry sources who claim that Zuma burned up before reaching orbit. And it implies that Zuma’s failure was caused by faulty separation from the Falcon 9’s second stage or the upper part of the rocket. The article claims that the “expensive, highly classified US spy satellite is presumed to be a total loss” and that Capitol Hill staffers have been briefed on the mission failure.

The article doesn’t mention, however, that the adapter mating Zuma to the Falcon 9 rocket was actually built and provided by Northrop Grumman––a fact reported by WIRED in November after obtaining early documents regarding the mission. While no one has officially confirmed that Zuma was lost, if a separation issue is to blame, it raises questions about the adapter Northrop Grumman provided. The veteran aerospace manufacturer also procured launch services for the mission on behalf of a still-unknown government agency or military branch.

WIRED reached out to SpaceX senior communications manager James Gleeson, who said the company doesn’t comment on “missions of this nature.” Zuma was one of SpaceX’s most clandestine missions yet, announced just a month before its initially planned launch date in November. SpaceX’s relationship with the government’s national security apparatus is fairly new, with Musk’s launch provider previously completing a secretive NRO mission and a spaceplane launch for the Air Force last year. But Zuma’s payload and destination were entirely clandestine.

Gleeson did indicate, however, that the Falcon 9 that lofted Zuma did its job. This morning, SpaceX sent out an uncharacteristically strong statement on behalf of the company’s president and COO Gwynne Shotwell. “For clarity: after review of all data to date, Falcon 9 did everything correctly on Sunday night. If we or others find otherwise based on further review, we will report it immediately. Information published that is contrary to this statement is categorically false.”

The statement also insisted that SpaceX’s operations would be unfazed by the alleged failure of Zuma. It is moving ahead with the Falcon Heavy hold-down fire at the end of this week, and its maiden flight will come soon after. “Since the data reviewed so far indicates that no design, operational or other changes are needed, we do not anticipate any impact on the upcoming launch schedule,” Shotwell concluded. “We are also preparing for an F9 launch for SES and the Luxembourg Government from SLC-40 in three weeks.”

The company has done so previously, however, providing comment to WIRED on November 13, in the month Zuma was originally supposed to launch. In that statement, Rains told WIRED that Northrop Grumman was taking “great care to ensure the most affordable and lowest risk scenario for Zuma” and confirmed that it was going to low Earth orbit.

Clues about what may have happened trickled online throughout Monday afternoon. The Air Force, specifically North American Aerospace Defense Command, indicated the placement of a new US satellite following the Zuma launch with its orbit redacted—though it’s possible that Zuma made a single orbit before falling back into the atmosphere and burning up. Also, as Quartz pointed out, the military has previously misled the public with claims of a satellite failure to preserve the clandestine nature of a national security mission.

An amateur satellite tracker and astronomer Marco Langbroek tweeted photos taken by pilot Peter Horstink while he flew over Sudan’s capital Khartoum about 2 hours and 15 minutes after launch. The photo seems to show the Falcon 9 second-stage venting fuel where and when it was supposed to be doing so before its re-entry—a sign that deployment of the Zuma spacecraft went smoothly.

SpaceX has good reason to defend that performance. The company sued for the right to bid on lucrative military missions in 2014, challenging a monopoly that their competitor, Lockheed-Boeing outfit ULA, held on to for years. They were certified for national security launches in 2015—and funding SpaceX’s deep space ambitions, including sending humans to Mars, depends heavily on financial income from these contracts.

Because of the Zuma mission’s classified designation, it may be years until we know what happened to the pricey payload. Brendan Byrne, reporting for WMFE/NPR, tweeted on Tuesday afternoon that the Armed Services Committee has requested a congressional hearing regarding Zuma’s failure, with a date and time has yet to be set. In the meantime, though, it will be easy to shape a narrative that shifts the blame—especially with Zuma’s billion-dollar price tag.

GizmoCrazed - January 15, 2015 0
Love can cure all, they say. Couple that love with a bit of technology and this certainly materializes. A former software engineer, Michael Balzer,...