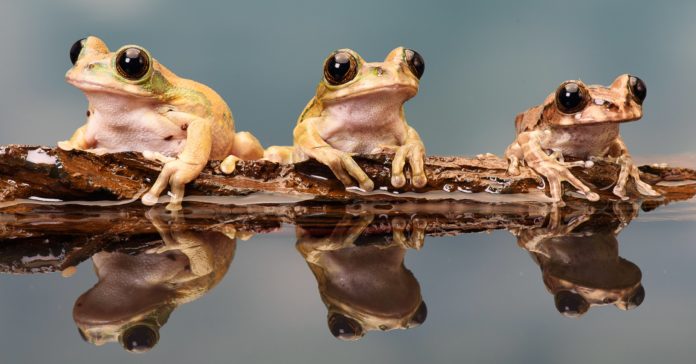 Travel with me to the year 2100. Despite our best efforts, climate change continues to threaten humanity. Drought, superstorms, flooded coastal cities. Desperate to stop the warming, scientists deploy planes to spray sulfur dioxide in the stratosphere, where it converts into a sulfate aerosol, which reflects sunlight. Thus the planet cools because, yes, chemtrails.

It’s called solar geoengineering, and while it’s not happening yet, it’s a real strategy that scientists are exploring to head off climate disaster. The upside is obvious. But so too are the potential perils—not just for humanity, but for the whole natural world.

A study out today in Nature Ecology & Evolution models what might happen if humans were to geoengineer the planet and then suddenly stop. The sudden spike in global temperature would send ecosystems into chaos, killing off species in droves. Not that we shouldn’t tackle climate change. It’s just that among the many theoretical problems with geoengineering, we can now add its potential to rip ecosystems to shreds.

The models in this study presented a scenario in which geoengineers add 5 million tons of sulfur dioxide to the stratosphere, every year, for 50 years. (A half century because it’s long enough to run a good climate simulation, but not too long that it’s computationally unwieldy. The group is planning another study that will look at 100 years of geoengineering.) Then, in this hypothetical scenario, the sulfur seeding just stops altogether—think if someone hacks or physically attacks the system.

“You’d get rapid warming because the aerosols have a lifetime of a year or two, and they would fall out pretty quickly,” says study co-author Alan Robock, a climate scientist at Rutgers University. “And then you’d get all this extra sunlight and you’d quickly go back up to what the climate might have been without the geoengineering.” We’re talking a rise in land surface temperatures of almost a degree per decade. “Even if you do it over five years, you’re still going to get this rapid warming,” he says.

Now, species haven’t survived on Earth for 3.5 billion years by being wilting flowers; if the climate changes slowly, species can adapt to withstand extra heat or cold. But suddenly blast the planet with a massive amount of solar energy that quickly, and you’re liable to catch a species off-guard.

And it’s not just temperatures they’d have to adapt to. Dramatic shifts in precipitation would force species to quickly move to new climes or face destruction. Species like amphibians, which are sensitive to temperature and precipitation changes, would have a tough go of it. And of course, not all species have the option of fleeing. Populations of trees and clams and corals would be pretty much kaput.

Even if a species is particularly resistant to these changes, the downfall of a keystone species could bring its whole ecosystem crashing down. Take coral, for instance. “If you lose the corals, you lose the species that live within those corals and you lose the species that rely on those species for food,” says John Fleming, a staff scientist with the Center for Biological Diversity’s Climate Law Institute who wasn’t involved in the study. “And so it really is an up-the-chain process.”

Knowing these risks, it might seem implausible that humans would just suddenly stop geoengineering efforts once they’ve started. Why not just keep pumping sulfur dioxide into the air ad infinitum to keep the planet on life support? Robock explains that the scenario they used isn’t definitive—it’s just a possible option. And there’s a possibility that we might not willingly stop geoengineering.

Say the world came together and decided that solar geoengineering is our only hope for survival. Planes start flying over the equator, spraying millions of tons of gas. The planet cools—but alas, this doesn’t affect everyone equally. Some nations might find themselves the beneficiaries of extra precipitation, while others descend into drought.

In that situation, a massive country like China or India suffering ill effects could blame the geoengineers and demand they stop. “There is the potential for clubs of countries to wield a lot of power to make a global geoengineering deployment work more for their interests than for less powerful countries,” says lead author Chris Trisos of the University of Maryland.

Or maybe the Earth itself plays a wildcard. Volcanoes spew their own sulfur dioxide into the atmosphere all the time; get a big enough eruption and you can send the climate into disarray. That happened in 1815 with the eruption of Mount Tambora, which led to the Year Without a Summer. Or Laki in 1783, which caused famine in India and China because it weakened vital monsoons.

“If there was a series of volcanic eruptions that produce a cooling effect, then that might be the reason why people say, ‘Well, actually, we better stop doing the solar engineering,’” says University of East Anglia environmental scientist Phil Williamson, who was not an author of the paper but who penned a companion analysis of it. “And then you get the rebound effect as a result of that.”

To be fair, science’s exploration of solar geoengineering is still in its early days. Hell, the technology to do it doesn’t even exist yet. It may well be that scientists find that deploying aerosols is just too risky. Maybe a better idea is 2CO2 sequestration. Or marine cloud brightening, as another way to bounce light back into space.

But now is the time to start considering the ethical and regulatory pitfalls of pursuing such a strategy. Late last year, Congressman Jerry McNerney introduced a bill that would require the National Academies of Science to produce two reports—one that looks at research avenues and another that looks at oversight. “I hope that we can sooner rather than later figure out what the potential benefits and risks are of doing this geoengineering so society will know whether it’s even a possibility,” says Robock. “If not, if it’s too dangerous, then it’ll put a lot more pressure on us to do mitigation soon rather than later.”

“The ultimate fear with geoengineering is that we’re trying to alter a system that’s much too complex for us to truly predict,” says Fleming. “So doing that can put us in a worse situation than we’re in already.”

In the meantime, here’s an idea: Let’s dramatically reduce greenhouse gas emissions. The whole of life on Earth would certainly appreciate it.