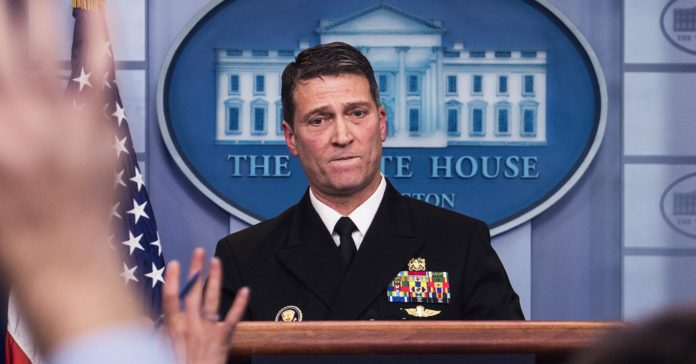 The numbers don’t lie, unless they do. After much resistance and under increasing pressure, President Trump’s White House this week allowed Rear Admiral Ronny Jackson, the White House doctor, to release results from a physical examination.

How’d Trump do? Well, that’s tricky to answer. Trump’s opposition and the media have been asking two fundamentally impolite questions for years: Is he fat? And is he nuts? As a candidate and as president, Trump has accused his opponents of mental and physical illness. Normal presidencies tend to release medical records to journalists who cover that beat. But last year wasn’t a normal campaign, and this hasn’t been a normal presidency.

Whether the president is healthy has consequences on the stability of the nation, but that knowledge has been hard to come by. Complicating things further, the answers to those impolite but salient questions aren’t, it turns out, straightforward—for anyone, not just a president.

At a long press briefing on Tuesday, Rear Admiral Ronny Jackson ran down the numbers and took some squirmy questions. Trump, 71 years old, is 6 feet and 3 inches tall, Jackson said, and weighs 239 pounds. That’s … convenient. Doctors have a suite of responses teed up for an overweight man in his 70s, but those numbers muddy the swamp. Apparently Trump reported a height of 6’2” at one point, but the most recent height and weight give him a Body Mass Index just one tick below “obese.” Medically speaking, the president is merely quite overweight. (If you believe the numbers Jackson gave, that is. If you don’t, we’re basically done here, because there’s nothing else to evaluate.)

This week’s issue of the Journal of the American Medical Association, by coincidence, dedicates an entire special section to obesity. Its point is that those rigid standards for BMI might not tell the whole story. It might be possible, for example, to be obese, BMI-wise, but still have good cardiorespiratory fitness; conversely, someone with low CRF might be more likely to face health problems than someone with obesity. Physical activity levels and other factors confound all the data, as does age. “It’s definitely a work in progress,” says Catherine Forest, medical director at Stanford Health Care in Los Altos. “The determination is based somewhat on body mass index, but it’s more complicated. If you have elevated cholesterol and you have diabetes, your risk is multiplied. If you smoke cigarettes, your risk is multiplied. If you don’t exercise, it’s multiplied.”

OK, good questions there. The president doesn’t smoke, doesn’t drink alcohol, and he doesn’t have diabetes—Jackson reported his hemoglobin A1c, a measurement of blood sugar, as 5 percent. That’s in the normal range. Trump’s blood pressure and heart rate are in the normal range, too. The president’s EKG and heart function were normal, and tests also showed that Trump’s carotid artery had no blockage.

But: The president by most accounts doesn’t exercise—playing golf three times a week doesn’t count if you ride the cart. And his cholesterol, especially the cardiovascular disease marker low-density lipoprotein cholesterol, is above 140 even though he takes a statin drug to lower it every day. He also takes a daily low dose of aspirin, also thought to be protective of the heart. His cardiac calcium level was high, a risk factor for coronary artery disease that freaked out a few cardiologists. Jackson said the president had “nonclinical coronary atherosclerosis.” Other physicians said, basically, wait what now?

The key to figuring this out, probably, is to not get too obsessed with the technical distinction between “overweight” and “obese.” That’s a public health-type way of distinguishing among populations. But we’re not talking about a population here. “I would think that if he’s close to a BMI of 30, he probably has a significant amount of excess fat,” says Xavier Pi-Sunyer, an endocrinologist at Columbia University and co-director of the New York Obesity Nutrition Research Center. “The question is, is his excess fat subcutaneous, or does he have a lot of intra-abdominal, intramuscular adipose fat? Those are significantly more dangerous.”

In other words, if all your fat is just underneath your skin, OK, maybe that’s cool. But if it’s around your vital organs and gunking up your liver, that’s not cool. “If you want to be more personalized, you probably want to do a few more studies to see where the fat is in the individual,” Pi-Sunyer says. That’d probably mean an MRI, which Jackson didn’t mention.

Cardiovascular health was only part of what Jackson tested. He performed, controversially among the Twitterati, a test called the Montreal Cognitive Assessment. It looks dumb—a series of very basic questions, like, “can you tell which one is a lion and which is an elephant,” or “draw ten minutes to 11 on a blank clock face.” Kindergarten stuff (here’s a PDF), and Trump aced it.

To be clear, though, the point of an assessment like this one or the “mini-cog” some physicians use is to check basics, not evaluate whether someone is qualified to be president. The MoCA is a screening test—you do it to see if a person needs more testing later. “That test is specifically looking for certain types of cognitive dysfunction. It doesn’t test for depression or other kinds of mental health disorders,” says Joseph Ouslander, a geriatrician at the Schmidt College of Medicine at Florida Atlantic University and executive editor of the Journal of the American Geriatric Society.

Even if a MoCA shows mild impairment, Ouslander says he might not do anything for six months or a year, or he’d wait to see if a patient or family members complained about memory lapses or other problems. (It’s like invoking the 25th Amendment, except for family dinners.) That might not be ideal. “Actually, executive function is one of the first things that’s in decline with dementia,” says Forest. “Their memory might be OK, but their ability to make good decisions is in disrepair.”

Which does hint at a bit of a then-what. Washington conventional wisdom remains that Ronald Reagan was suffering symptoms of cognitive decline in the later years of his presidency, and was protected by his staff and his wife. No doctor or medical records have confirmed that, but even the existence of the rumor hints at the degree to which a committed White House could deal with a medically compromised president. After all, Woodrow Wilson’s wife Edith became de facto president after he suffered a stroke—though it’s hard to imagine that sort of breach of constitutional succession today.

By Jackson’s account, the president got a more than full work-up. He had a colonoscopy in 2013 that was normal—no polyps—which means that no doctor needs to go near the orifice with which the president has indicated some familiarity until 2023. His neurological screens were normal, but Jackson didn’t say if he’d looked at Trump’s gait and balance, but the president did get all his recommended vaccinations. The kind of screening questions that Forest and Ouslander might ask on a wellness visit about depression, connection to family and friends, elder abuse, or help with shopping or finances seem non-operative for a POTUS.

Near the end of his presentation, Jackson said something a little strange. He’d acknowledged that he was going to up Trump’s statin dose and try to talk him into more exercise and a better diet; press accounts have said Trump loves his fast food and ice cream. But then Jackson said “the president’s overall health is excellent.” He said Trump had “great genes.” (No genetic test results were disclosed.) Statins can have some uncomfortable side effects including pain and, rarely, memory loss and confusion. And lifestyle changes? Let’s just say that patient compliance is often an issue even for non-presidents.

“I wouldn’t call what was described a clean bill of health. There are certainly alerts that need to be followed up,” Pi-Sunyer says. “I think his doctor is probably a very good doctor and he did whatever he had to do. And now he knows the guy is overweight, has a high LDL, is over 70, very sedentary, and seems to eat an abominable diet. He knows what he has to do.” Finding out whether it happens and whether it works will have to wait until the next time Jackson does the numbers.

What Happens In One Day On The Internet [INFOGRAPHIC]

GizmoCrazed - March 9, 2012 0
Living in this modern era, we have seen many technological wonders, but have you ever wondered what is the greatest of them all? What...

Android Malware Increased By A Staggering 472% Since July