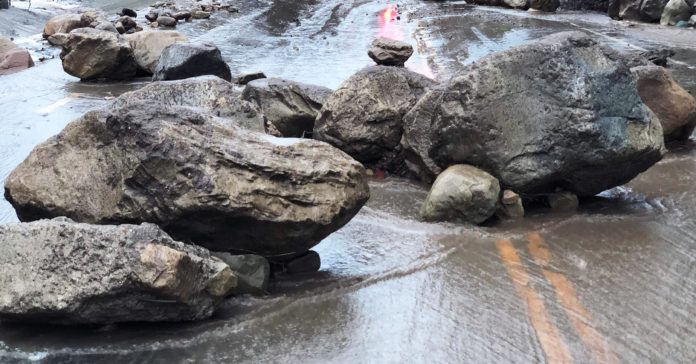 The mudslides earlier this week that killed 17 people—eight more remain missing—came as a terrifying surprise in the early morning to the enclaves of Montecito and Summerland, nestled into the California coastline just southeast of Santa Barbara. But in most respects, they were also entirely predictable—and predicted.

The Thomas Fire, the largest wildfire in California history, burned almost 450 square miles of the Santa Ynez mountains in late December, a swath of steep, rocky chaparral as big as San Antonio. Then the rains came, a massive winter storm after almost a year of drought. This is the climatic and geomorphological history of the transverse ranges, the “fire-flood cycle”—as a scientific journal article named it in 1935.

The mountains of Southern California burn and then liquefy with terrifying regularity, and, yes, more often than they used to thanks in some measure to climate change and increased human development. Only now, science is starting to catch up to the cycle—to understand how it works and predict when it will be at its worst. And those scientific insights are coming just in time for more and more people to build more and more houses at the feet of those eternally liquefying mountains.

In one sense the mudslides—what geologists more properly call “debris flows,” because they contain both water and a diversity of stuff, from ash to houses—have always been predictable. Wildfires are getting more common, and wildfires make mountainsides more likely to give way. With vegetation burned away, roots that held underlying soil together are gone, and the cover that a canopy might have provided against rain vanishes as well. In Southern California’s chaparral biome, that vegetation adds another factor. Those shrubs and low, waxy plants are adapted to fires every few decades. Their drought tolerance comes in part from a resin-like coat on their leaves that helps retain moisture.

But fire volatilizes that wax, which then coats the soil and ash left behind. “You develop these hydrophobic soils,” says Francis Rengers, a geomorphologist on the US Geological Survey’s Post-Wildfire Debris Flow Team. “Water that normally would hit the ground and soak in, because soil is porous, now it’s the soil and it’s like you put a raincoat on the landscape.” Dump enough rain onto that coat, though, and it penetrates, and that hydrophobicity can enhance erosion.

Even the geology of Southern California’s mostly east-west mountain ranges makes debris flows more likely. The region’s frequent earthquakes—what, you want fires and mudslides to be the only disasters?—are evidence of “active tectonics.” Which is to say, those mountain ranges are growing boys and girls, always getting taller and steeper. More steep equals more likely to slide. The rock itself is, geologically speaking, “shattered”—above Montecito, where the Thomas-related slides were, it’s sedimentary and metasedimentary rock, much more likely to erode than, say, Yosemite granite. “It’s rock that’s loose and available to move,” Rengers says.

So these SoCal debris flows are, quite literally, the stuff of literature. The great science journalist John McPhee wrote about them in “Los Angeles Against the Mountains” in 1988, and TC Boyle picked up on the terror of it all in his 2005 short story “La Conchita.” “A vanguard of boulders came sluicing across the freeway, followed by a soupy river of mud. A rock the size of a cannonball thumped into the underside of the U-Haul truck and a fistful of pellets—gravel, I guess—sprayed the side of my car,” Boyle writes. “The mud spread out across the pavement, seething around the tires and underneath the car and beyond, and soon dark tongues of it had pushed across the southbound lanes, too.”

It’s good writing because it’s right. “The debris starts out in a loose state and gets agitated as it goes downhill. As it mixes with water, it attains a liquefied state that allows it to flow almost as readily as water, even though it’s charged with boulders and debris,” says Richard Iverson, a hydrologist with the US Geological Survey. “The leading edge is chock-full of the largest debris, and that part has a lot of resistance. So what you get is a more liquefied, fluid part pushing that resistive front forward, but because you have the front it can become much deeper.”

In other words, the leading edge of a debris flow is a moving dam, a wave of destruction that accretes yet more ammunition as it oozes forward as fast as 10 miles per hour, like the parade in Satoshi Kon’s Paprika—a “bouldery snout,” as Susan Cannon and Jerry DeGraff wrote in 2009, “followed by a more viscous body that transitions to a very muddy water flow.” The big stuff in the front acts like a bulldozer, the pressure of the muck causes even more damage, and the water can literally float cars off the ground and buildings off their foundations.

“Down a steep canyon, the debris flow will be getting bigger and bigger,” Iverson says. “Once it hits flatter terrain or can spread out onto an alluvial fan or into a neighborhood, then it slows down and quits growing.”

Fortunately, in recent years geologists have gotten better and better at predicting which slopes are likely to slide after fires, based on computer models using data from previous flows. So for example, Rengers’ team starts with satellite images of burned areas, comparing the green-ness of before images to the blackness of the afters to develop burn severity maps. “That’s called a normalized burn ratio image,” Rengers says. “It’s a quantifiable signal.”

To that, they add soil erodibility data from onsite examination and the National Resources Conservation Service, the soil division of the US Department of Agriculture, combined with information on the steepness of the slopes that burned. “Areas with high burn severity, steep slopes, and high erodibility have the highest probabilities for where debris flows will originate,” Rengers says.

And in fact, his group’s map of debris flow hazards shows the hills above Montecito and Summerland as having a very high probability of sliding. The area was under evacuation orders before Tuesday.

It just needed one more ingredient: Rain. And that happened, too. “For the Santa Barbara County-Ventura area, it takes about a half an inch of rain in one hour for debris flows to occur,” Rengers says. “What we saw in the Montecito area was that there was a half inch of rain in five minutes.”

So it was a coincidental catastrophe. Chaparral starts to grow back within months; the rains came just weeks after fire crews got the Thomas Fire under control. I drove through that part of the state two weeks ago, and the hillsides were black. “It was a really low probability rainfall event, like a 0.5 percent chance,” Rengers says. “That kind of explains the big response.”

What researchers like Iverson and Rengers don’t yet know how to predict is what kind of damage a debris flow will do and where it’ll go. The flatter land between the mountains and the sea, packed with buildings, is in its way more chaotic terrain than the hillsides and canyons. The question is, how far will a debris flow spread? “Once something comes out of the canyon and gets routed down streets and between houses, it becomes challenging to track the momentum and deceleration of the flow,” Rengers says. “We’re pretty confident we understand the physics, but the parameter values, like how much debris should we estimate? What water ratio? It’s almost impossible.”

It’s all under active research; people from Rengers’ group are in Southern California already, flying planes over the area and taking measurements. Iverson’s group is working on models for the potentially city-killing debris flows that could conceivably come off of Mount Rainier in Washington.

Fire researchers and geologists know a few things for sure: The 2018 fire season starts in about nine months. The cycle starts again. And what’s true in California is increasingly true everywhere. Fires are more likely to start in the built environment, along the wildland-urban interface where human beings live, and more human beings live there than ever before. Climate change means warmer springs and summers, and possibly increases in precipitation as well. Then the rains will come, and mountainsides will flow like water again.