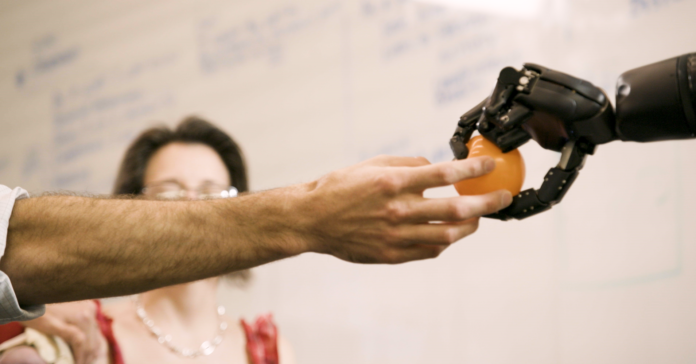 For a species that’s conquered Earth and traveled through space and invented the Slapchop, we humans sure are insecure when it comes to technology. Our greatest fear: the singularity, when the abilities of AI and robots surpass those of humans, growing so advanced that civilization is forced to reboot as humanity spirals into existential dread. Or worse, the machines turn us into batteries, à la The Matrix.

As fun as that all sounds, UC Berkeley roboticist Ken Goldberg thinks the singularity is bunk. “I think it’s counterproductive,” he says. “I think it’s demoralizing and it’s fiction. We’re not even close to this.”

The robot revolution we are in the midst of is actually way more interesting. Goldberg calls it the multiplicity. “Multiplicity is not science fiction,” he says. “It’s something that’s happening right now, and it’s the idea of humans and machines working together.” So welcome to the future, where robots do things like gently hand us screwdrivers instead of stabbing us with them.

You, my friend, are already part of the multiplicity. When you jump in your car and boot up Google Maps (or Apple Maps, if you’re a glutton for punishment) and let algorithms guide you to your destination, you’re collaborating with a machine. You may even have a car that drives for you on the highway—in which case, you’re not just collaborating with a machine, you’re entrusting it with your life.

As the machines grow more sophisticated, so too will our interactions with them. Truly self-driving cars you can buy and have shuttle you around are probably decades away, but in the meantime you’ll likely drive a car that does a portion of the driving for you. What you don’t want it to do, though, is suddenly freak out when it’s not confident it can handle a situation and start flashing alerts at you. You want it to communicate consistently.

“All along it’s sort of saying, ‘Hey, you know, it’s starting to get a little overcast, I’m getting a little uncomfortable. Can you sort of tune in?’” says Goldberg. “So it’s kind of keeping you informed before the crisis.”

The very nature of work, too, is transforming in the age of multiplicity. Recently, robots have escaped the lab and the factory to work alongside humans, thanks largely to sensors like lidar that have become both cheaper and more sophisticated. Security robots, for instance, supplement human guards. Hospital robots deliver drugs and linens to nurses. And at Walmart, a towering robot rolls through the aisles scanning shelves to do inventory.

Very few robots out there are meant to actually replace human labor, and there’s little research to suggest that the jobless future is nigh. “It’s not a desire to simply take people’s jobs away,” says Goldberg. “We want to enhance people, and we want them to be able to focus on the more subtle, rewarding, and human aspects of their jobs.” Benevolent capitalism this is not—it’s the idea that humans can triumph where robots fail, and vice versa. Robots are great at brute strength, precision, and speed. Humans have better brains and marvelous hands with which to grip an array of objects. And these contrasts are going to stay contrasts for a long while to come.

A great example of multiplicity in action is what Amazon is doing. In its fulfillment centers it employs 100,000 robots that autonomously deliver products to humans, who then pack the boxes that go out to customers. So here the tireless robots do the dull task of hurrying around the warehouse, while the humans handle the complex manipulations that would confound a robot. Hell, the robots don’t even have the hands (or end effectors, in robot lingo) required to grasp things.

“The way we have to start thinking about robots is not as a threat, but as something that we can work with in a collaborative way,” says Goldberg. “And so a lot of it is changing our own attitudes.”

Which may be a big ask, given the pervasive narrative of the job-killing robot. San Francisco is going so far as to consider a tax on robots that replace humans. Not helping matters are flashy robots, like Boston Dynamics’ Atlas humanoid, that appear to be more advanced than they actually are. Atlas can do backflips now, true enough, but robots—and bipeds in particular—are still primitive. For proof, watch them fall on their faces pretty much constantly at the Darpa Robotics Challenge.

Sure, as robots get more sophisticated, they’ll threaten to replace some human labor outright. That’s the nature of automation. But we won’t wake up tomorrow amid a robot singularity. The shift will happen more gradually, and even then, not catastrophically. All the while, and probably far, far into the future, we’ll be collaborating with the machines, exploiting their strengths while celebrating our own, which hopefully doesn’t include our ability to double as batteries.

Startups Weekly: Will Trump ruin the unicorn IPOs of our dreams?

This Tiny Camera Could Take Real Time 3D Images From Inside...