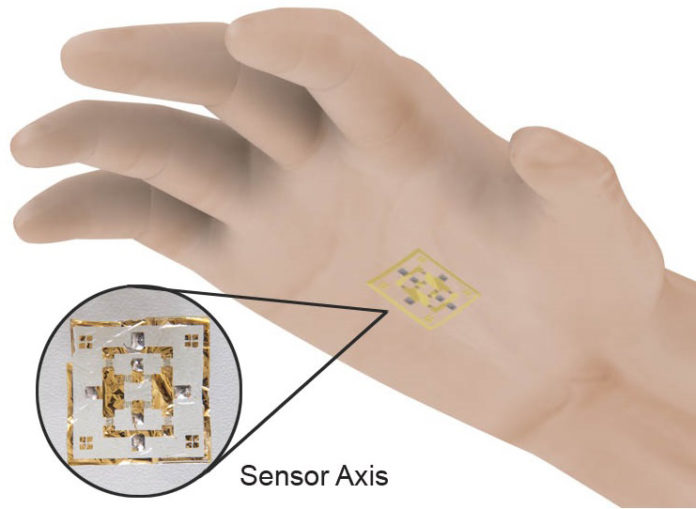 Someday, physically touching our electronic devices will be as archaic as standing up from the recliner to change the channel. Voice recognition systems and home assistants can turn on lights, pull up podcasts and order paper towels on command. Cameras in video game systems and televisions can do our bidding with a gesture.

And to the list of hands-free methods of component control, we can add electronic skin.

E-skins have been garnering a lot of attention from software and material engineers over the past few years. Akin to slapping on a Band-Aid, e-skins can track internal health data such as muscle movement, heart rate and brain activity. Some can even track external factors such as ultraviolet light exposure on the body.

Denys Makarov and his colleagues at the Helmholtz-Zentrum Dresden-Rossendorf in Germany developed a new e-skin that marries new and old technology to allow people to manipulate virtual objects without touch.

Magnetic field sensors, which can be purchased easily, are not novel inventions. According to Makarov, people have been using them for years to monitor angular motion and displacement. But he and his fellow researchers translated this technology into electronic skins that serve as interfaces with electronics.

“We’re beginning to realize an electronic skin that’s a flexible and ultrathin device, which can reconstruct spatial position of the body, finger or palm, for example, with respect to the source of the magnetic field,” says Makarov.

It is the first e-skin with angle sensors that can translate directional and axial perception. In a recently published study, the e-skin helps users perform an array of virtual tasks. When worn like a wristwatch, test users could type on a remote, virtual keypad without touching the actual pad—the device captured, digitized and translated movements of their finger onto an external screen via a magnet attached to their fingertip.

In another demonstration, users placed the e-skin on their palm. When they placed their hand directly above a magnetic field source and rotated their hand, their motion adjusted the intensity of a virtual light source. Adjusting dials without ever touching them could come in…handy…for people who are tackling a dirty job, for example.

The crux of the effort in designing the e-skin was aimed at making it durable and functional.

“If you want to have it on the skin, obviously you want it resistant to moisture, and sweat. You want to have it temperature stable, and that’s why we were putting a lot of efforts into developing proper encapsulation,” said Makarov. The final product is a small, but sturdy apparatus with a total thickness of 3.5µm at the site of the sensor.

The device could have future applications in navigation, robotics, regenerative medicine, sports, gaming as well as virtual and augmented reality interactions. The team hopes to improve the senor’s sensitivity by two to three orders of magnitude. They also aim to calibrate the device to Earth’s magnetic field.

The future of controlling things like a Jedi seems to be getting closer every day.

Very cool it is.

What Sea Slugs Can Teach Us About Saving the Environment

Self-driving startup Aurora will work with Nvidia on autonomous driving

Why EaseUS Data Recovery Wizard Free is the best for data...