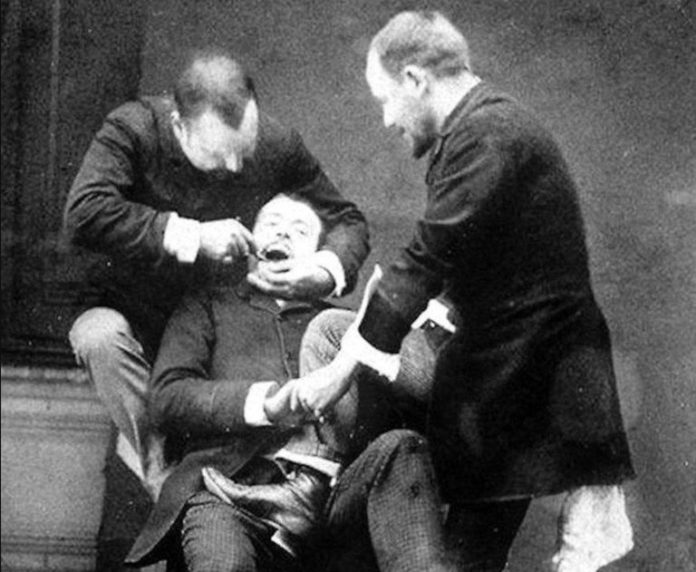 After thousands of years of crude dental practices, the art of tooth extraction had reached this level of sophistication by the early 1800s. (Credit: News Dog Media)

Most people don’t enjoy going to the dentist. There’s just something off-putting about having your mouth wide open while someone’s scratching and scraping your precious chompers. But at least dentists can give you Novocain to make your mouth go numb for the more intense procedures.

You were born in the best of times, because for the majority of the human timeline, our ancestors didn’t have it so easy.

Cavities really started wreaking havoc when humans started farming about 12,000 years ago—possibly even as far as 23,000 years in what is modern-day Israel. Carbohydrates, from our more grain-heavy diet, break down into sugar and feed cavity-causing bacteria that eat away at healthy teeth. Scientists have even unearthed remains that show dental work that predates the agricultural revolution, proving that people have been trying to deal with dental pain for too damn long.

A young Italian man who died about 14,000 years ago takes the cake for the oldest known dental work. Researchers found one of his lower molars had drill holes, which were likely painstakingly—literally—drilled with pointed stone tools made of flint. You can see the handiwork below. 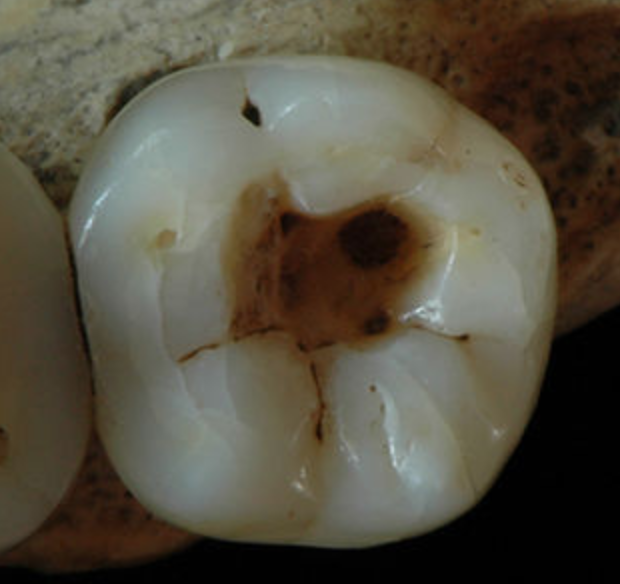 Another ancient Italian, who died about 13,000 years ago, was also found with deep drilled pits. This time, though, researchers believe they were once filled, possibly with hair, vegetable fibers and bitumen (an oil derivative), making it the oldest example of a dental filling.

One burial site in Pakistan (dating between 7,500 and 9,000 years ago) contained 11 molars from 9 different adults that showed signs of drilling. Someone sure was working on becoming the resident dentist. A bow-like drill with a flint tip was likely used to gouge cavities in the Pakistani’s teeth. Researchers reconstructed this method based on models and found that it took less than one minute to create the type of holes found in their teeth, so maybe they weren’t suffering for too long.

Based on continued wear of the teeth that received dental care, both ancient Italians and the Pakistani’s lived to tell their undoubtedly painful dental tales. 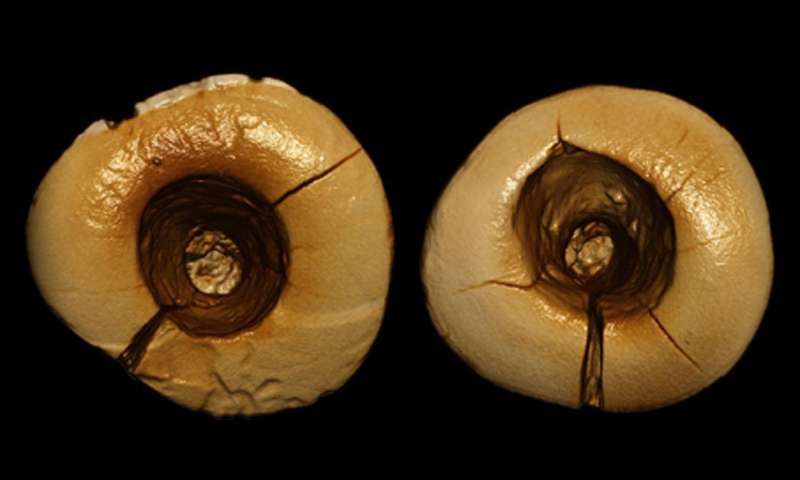 These teeth from 13,000 years ago were once filled with hair, vegetable fibers, and bitumen. (Credit: American Journal of Physical Anthropology)

For fillings, our ancestors also used beeswax. In Slovenia, researchers found a 6,500-year-old tooth on a jawbone that was coated with beeswax. It had a long vertical crack partially filled with beeswax, likely to help protect the owner from pain due to temperature changes and from eating.

Sometimes decay is so bad or a tooth is so badly fractured that, no matter the effort, it just has to be removed. And boy, our ancestors got creative when it came to implants: The Mayans used shells to replace missing lower teeth, ancient Hondurans used stones, and ancient Egyptians and Phoenicians (Phoenicia was an ancient civilization along the Mediterranean Sea) used gold wire to create a type of bridge (a dental implant used to stabilize teeth). 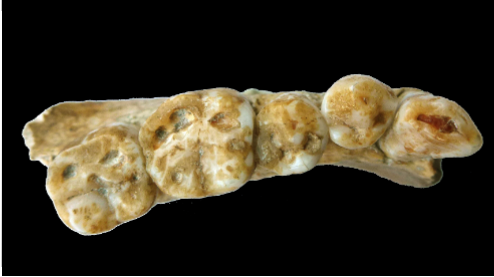 Some of our prehistoric dentists used beeswax for fillings. At least it was sweet. (Credit: Bernardini et al)

From the Middle Ages to the 1800s, dental technology was notably less crude, but it did little to lessen the brutality associated with a visit to the dentist. One benefit (or not): The same person who ripped your tooth out was also your hair stylist, limb cutter and blood-letter. These so-called barber-surgeons carved out their niche in the cutting game while working in European monasteries giving monks their tonsure—a shaved scalp that served as a sign of devotion.  Their “expertise” with razors put them in position to be jacks-of-all-bloody-trades well into the 19th century.

Then, the tides started shifting around the 1840s thanks to Horace Wells, a pioneering dentist who started using nitrous oxide to anesthetize his patients. Wells was inspired to incorporate laughing gas into his practice after attending a live demonstration showing its potent side effects in 1845. An apothecary clerk, Samuel Cooley, sucked in the gas and started getting pretty loopy. He apparently slammed his knee into a bench while jumping around. After coming down, Cooley noted bruises and abrasions on his knees, but couldn’t recall how they got there. 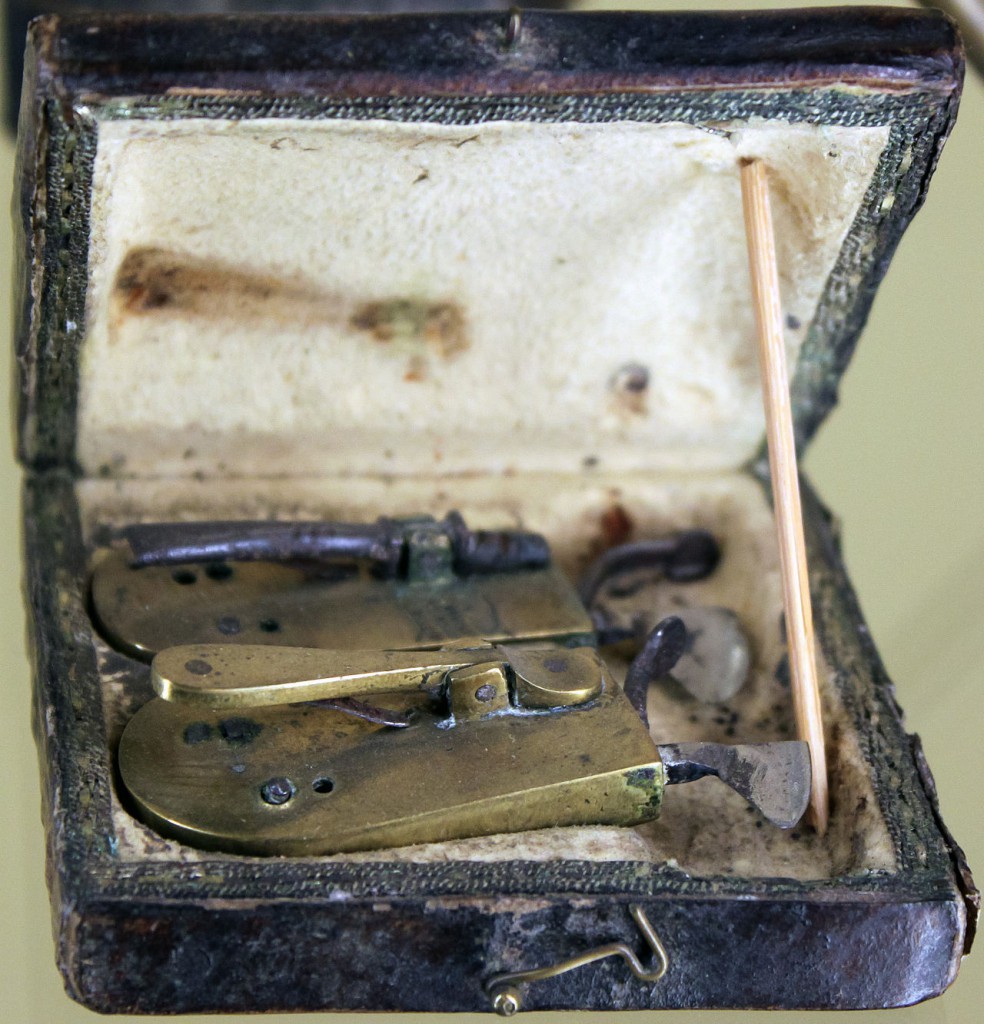 Wells, the next day, sucked in some of the gas himself and had a colleague rip out one of his teeth. He didn’t recall experiencing any pain. However, Wells reportedly demonstrated the effects of nitrous oxide in another public performance, but it was regarded as a failure because the patient screamed in pain. The American Dental Association gives credit to dentist William Morton for conducting the first successful public demonstration of the use of ether anesthesia for surgery. We thank both men for taking the bite out of dentistry.

Things only continued to get better from there. In 1891, Willoughby Miller was the first to describe the role microbes play in tooth decay, kick-starting widespread interest in oral health and hygiene. In 1905, German chemist Alfred Einhorn gave us Novocain. In 1938, nylon-bristled toothbrushes hit store shelves, and 12 years later the first flouride-fortified toothpaste was developed. And by the late 1950s, comfort reached a new level with the development of reclining dental chairs. It’s been Easy Street ever since.

Our beautiful smiles exist only because we’ve stood on the shoulders of so many other swollen-jawed ancestors. When it comes to dental care, it’s a great time to be alive.

Gut Microbes Could Soon Diagnose and Explain The Cause of IBS...

GizmoCrazed - December 20, 2018 0
(Credit: sedat seven/shutterstock) Doctors have long scratched their heads over the causes and cures for two common diseases of the digestive system: IBS and IBD....

11 Terrible Emails From Clients That Every Designer Hates Receiving