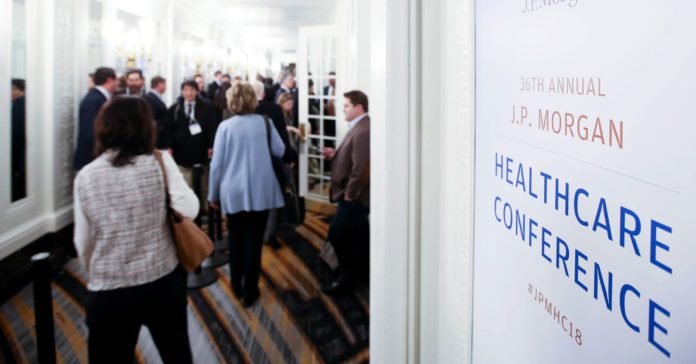 For one dizzying, schmooze and booze-filled week every January, thousands of tech execs, VCs, and investment bankers grind their way through a four-day slog of panel sessions, poster presentations, networking meetings, and cocktail-drenched after-hours parties in their industry’s premier orgiastic dealmaking event. And no, we’re not talking about CES.

On Monday, the Westin St. Francis hotel in downtown San Francisco opened its doors to the 36th annual J.P. Morgan Healthcare Conference, the country’s largest biotech convention. Everyone is there either to disrupt or to be disrupted. And while some companies were there to hawk the buzziest in far-future thinking—blockchain-based everything! fully robotic operating rooms!—others came to celebrate the very real, very current progress of a field 30 years in the making: gene therapy. And the promise of a much newer technology, Crispr, to propel the long-standing field forward with even greater momentum.

After decades of setbacks, gene therapy—a loosely defined umbrella term for any technique that uses genes to treat or prevent disease—is finally here. In December, the field got its very first FDA approval with Luxturna, which corrects a defective gene in a rare, inherited retinal disease. With a half dozen more treatments in late-stage trials and an unusually open-minded FDA commissioner in Washington, the industry is expecting a flurry of new approvals this year.

Which is going to throw a wrench in the health insurance industry. Because gene therapies are one-time, curative treatments, they break the traditional insurance model, which is designed to make multiple small payments over time. “We recognize that the products in this space create reimbursement challenges to the normal way of doing business,” said Janet Lambert, CEO of the Alliance for Regenerative Medicine, during her presentation Monday on the state of of the cell and gene therapy industry.

Lambert’s lobbying roadmap for 2018 includes helping insurance companies understand what to do with a new gene therapy like Luxturna, which cures blindness with a single, $850,000 injection into the eye. Ranked by sticker price, it’s the most expensive medicine in America. Spark Therapeutics, the company that makes Luxturna, argues that the six-figure price tag isn’t actually that unreasonable, if you factor in all the costs that patients with the inherited retinal disease would have racked up in a lifetime of seeking better care.

But because their clinical trial patients haven’t been followed long enough to determine if the treatment benefits are actually durable for a whole lifetime, Spark has received significant pushback from insurers. As a result, the company is already exploring a some creative new pricing models. It announced last week that it’s offering a rebate program based on the treatment’s effectiveness at 30 to 90 days and again at 30 months with one East Coast provider, and is in talks about expanding it to other insurers, Spark CEO Jeffrey Marrazzo said at JPM. He said Spark is also in discussions with the Centers for Medicare and Medicaid Services on a multi-year installment plan option. Either of these could soon serve as a model for how gene therapies might be made available to patients without cutting the legs out from under the healthcare system.

That’s a problem the Crispr companies in attendance at JPM don’t have to worry about yet. But they’re hoping gene therapy will have figured it out by the time Crispr-based medicines are patient-ready and FDA-approved. The first trial in humans isn’t expected to launch until later this year. But the Big Three—Editas Medicine, Intellia Therapeutics, and Crispr Therapeutics—had other hurdles to contend with.

Over the weekend, headlines metastasized across the internet about a new study suggesting Crispr might not work in humans at all. Published on pre-print server bioRxiv by a Stanford scientist who is also a scientific founder of Crispr Therapeutics, the non peer-reviewed study found that up to 79 percent of humans could already be immune to the most common forms of Crispr, called Crispr-Cas9, which come from two strains of Staphylococcus.

The timing was pretty terrible, and all three companies’ stocks took serious hits Monday morning, even as investors crowded into ballrooms to hear Crispr execs speak. The controversy made for one of the more tense moments of a gene therapy panel, when Sandy Macrae, CEO of rival gene editing tech company Sangamo, which uses zinc-finger nucleases, poked at Crispr Therapeutics chief scientific officer, Bill Lundberg. “That’s why we use human tools to edit humans,” he said.

The crowd of about a thousand swiftly inhaled. (This is what counts as maximum drama at JPM.) But the Crispr folks swiftly pushed back on the claims that immunity will present a barrier to their pipelines, since none of them use just plain old Cas9 like it’s found in nature. They’re all making proprietary tweaks to the enzyme system that they think will make the immunity issue, well, not an issue at all.

“We’ve actually done a lot of work ourselves on this specific topic and we don’t see this as a major issue to advancing Crispr-based medicines,” said Editas president and CEO Katrine Bosley. In a presentation to investors on Wednesday, the company revealed their plans to have five medicines in human testing within the next five years. The first diseases Editas is going after include a number of inherited eye disorders. The company is also pursuing a partnership with Juno Therapeutics to use Crispr to engineer T-cells to fight off incurable cancers.

Immunity to bacterial-based gene editors won’t be an issue for the current crop of gene therapies expected to get approvals in 2018. They represent the tail ends of a long and arduous development pipeline—one that Crispr is only just beginning to enter. It might be another 30 years before anyone is arguing about the insurance implications of one-time, cure-all Crispr meds. But at least by then, there should be some good options.