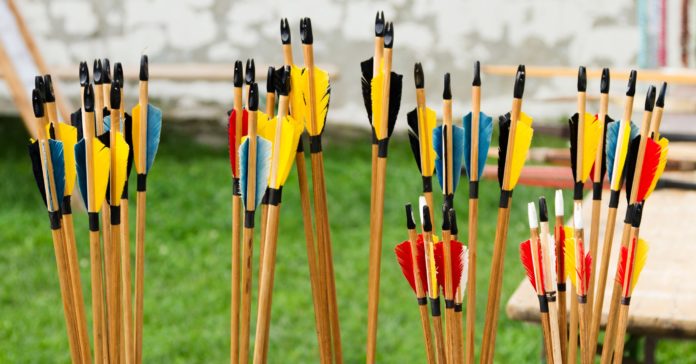 In a recent episode of Mythbusters, Brian and Jon (the new MythBusters) wanted to see what happens when you shoot an arrow straight up into the air. It will obviously come back down—but would it still be moving fast enough to kill you? If you are a MythBuster, the best option is to actually shoot an arrow straight up into the air and measure its velocity on impact. But for normal people, it might be better to just calculate the final arrow speed. Also one note—I’m currently a science consultant for the show.

OK, let’s start with a basic physics problem. How fast would an object be moving if you dropped it from a height of 300 feet (91.4 meters)? When an object is in free fall, there is only the gravitational force acting on it. Since both the acceleration and the gravitational force depend on the mass, all objects fall with the same acceleration (regardless of mass) with a rate of g = 9.8 m/s2. Of course, this is only true if you ignore air resistance—but we will get to that soon.

If the object starts at a vertical postion y = h and ends at y = 0 meters with a starting speed of 0 m/s, then the final velocity can be found with the following equation. If you want more details on kinematics, here is a resource.

Using the starting height of 91.4 meters, I get a final velocity of 42.3 meters per second (which would be 94.6 mph). So right there you can see that this is a fairly nice estimation of the motion of the arrow. But that analysis leaves off one important aspect—air resistance. As an object moves through the air, there is a force pushing back in the opposite direction of the object’s velocity. The magnitude of this air resistance force increases with velocity and also depends on the air and the size of the object. This air resistance force can be written as the following equation:

The v, of course, is the object’s velocity, C is a coefficient that depends on the shape of the object, A is the cross sectional area, and ρ is the air density.

Air resistance is fine and everything—but it adds a big problem to the falling arrow. As the arrow falls, it increases in speed. As the speed increases, the drag force increases. This means that a falling arrow has a non-constant force and a non-constant acceleration. The normal introductory physics level kinematic equations (like the one used above) only work for constant acceleration. This means we need a trick to solve this falling arrow problem. Yes, we essentially need to cheat. But it’s not really cheating if it works.

The method we will use is called the Euler method. The basic idea is to take the problem of the falling arrow and break it into many smaller problems. Instead of letting the arrow fall all the way to the ground, I will just let it fall for a very short period of time—let’s go with 0.01 seconds. During this small time interval, the falling object’s velocity doesn’t change very much (because it’s such a short time). This means that the air resistance force also doesn’t change very much. In fact, we can approximate this force as being constant during this interval. Now we are back to what we can handle—motion with constant forces.

But we made a huge sacrifice. Picking a short time interval allows us to calculate stuff, but now I have a whole bunch of problems to solve. If I want to model the motion of an object over a longer time interval of 1 second, I would have to do 100 calculations (using small steps of 0.01 seconds). This many calculations would pretty much suck. I don’t want to do that many, so I wont—I’m going to make a computer do it.

Don’t worry, you don’t have to be a code monkey to get this thing to work, but you do have to write a computer program. Honestly, it’s not as bad as you think—and anyway, I think everyone should be able to program a computer (at least a little bit). Here is the basic (very basic) plan for the computer program. During each small time step (of 0.01 seconds), I am going to calculate the total force on the object. Next I will use that total force to calculate the acceleration and the velocity of the object at the end of this time interval. Finally, I will use this final velocity to calculate the position of the object at the end of the interval. Then I just have the computer repeat these calculations until the object gets to the ground.

Let’s get to it. Here is the code (written in python). Go ahead and run the code (click the play button) and see what happens.

There are a few more comments I should make. When you see a number sign in a line of code, everything after that symbol is treated as a comment and the computer ignores it (the comments are just for humans). I tried to put enough comments so that you can see what’s going on—but more importantly, I point out which things in the code you might want to change. Yes, you should indeed change something and then run it again and see what happens. No, you can’t permanently break anything. But try changing things like the mass of the arrow or the drag coefficient of the arrow. It’s fun.

Now for something a little different. What if I want to model the motion of the arrow going both up and down? On top of that, I am going to include an object that starts with the same speed but has no air resistance (just for comparison). Here’s what that looks like. Remember, you can click the “pencil” icon to view and edit the code.

Remember, I’m just estimating some of these values for the air resistance. Really, the hardest parameter to estimate is the drag coefficient (C)—but still, the whole numerical model looks good enough for an approximation.

But in the end, this numerical model (that’s what we call a calculation like this) mostly agrees with the final arrow speed that the MythBusters measured using a camera. Oh, in case you want to test it out in real life—don’t. They also found that this arrow speed would be potentially lethal.

Attack of the clones