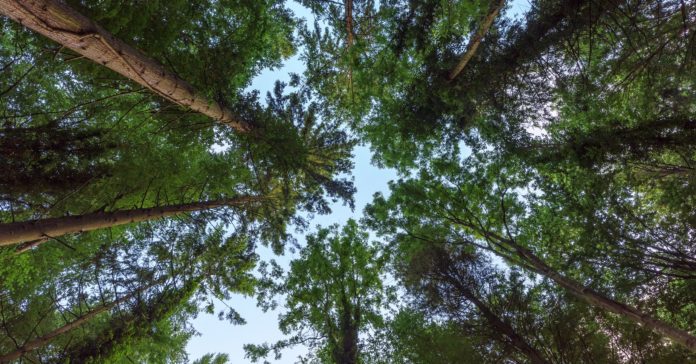 Northern England is set to get a whole lot greener. On Sunday, the UK government unveiled plans for a vast new forest spanning the country from coast to coast. Shadowing the path of the east-west M62 Highway, the new forest will create a broad green rib across England from Liverpool to the east coast city of Hull.

If fully realized along the lines announced this week, the forest will ultimately contain 50 million new trees, stretched in a dense 62,000-acre patchwork along a 120-mile strip. Not only will the forest repopulate one of the least wooded parts of the country with local, mainly broadleaf tree species, it will also provide a band of newly greened landscape to escape to from the many big cities located nearby.

The goal of a thick green ribbon is still a long way off, of course. So far, the government has pledged just an initial £5.7 million of the £500 million needed to fully realize the project. But what’s significant about the plan is that it amps up a transformation that is in fact already underway—it is actually the second major attempt in recent years to re-green the English landscape.

That first attempt lies roughly 100 miles south, in the English Midlands, where a vast new woodland stretching across a 200-mile strip is steadily reaching maturity. First planted 28 years ago, the National Forest, as it is called, is just beginning to mature and reveal how transformative such a rethink of the landscape can be. Like the new northern forest, it’s not just about providing a new carbon sink and leisure facility, but also about imagining what a landscape partly denuded by industrial exploitation and grazing can look like once these uses become obsolete.

This sounds wonderful—but first, a reality check. If Britain is planning new forests, it’s because the island badly needs them. Overall, the UK’s landscape contains one of Europe’s lowest proportions of woodland: just 13 percent. No one expects a populous, heavily developed country like the UK to reach the levels of, say Finland, which, at over 73 percent woodland, is Europe’s leafiest country by far. The UK trails far behind its more comparable neighbors Belgium (22.6 percent woodland) and France (31 percent), making it look decidedly bare and patchy by comparison.

This is especially true in England, which is just 10 percent woodland, compared to 15 percent in Wales and 18 percent in Scotland; in both countries, forestry has replaced pastoral farming in some areas. Even this small proportion is under attack, as ancient woodlands across the country face destruction. Current threats are numerous, including the endangering of 35 ancient forest tracts destined to be damaged by the construction of England’s new high-speed rail link, because tunneling or diversion has been deemed too expensive and inconvenient. Already, some critics are protesting that the Northern Forest project is a fig leaf—albeit a vast one—intended to mask neglect and abuse of woodlands elsewhere. There may also be a degree of political machination going on (although when isn’t there?), with the British government seeking a high-profile project that can reassure people that leaving the EU will not mark an end to all green policies and state support.

The existing National Forest nonetheless shows how attractive and sustainable such projects can be, provided they are not created at the exclusion of other conservation efforts. Its first saplings were planted in 1995 across a broad sweep that mixes towns, croplands, and former coalfields. Consisting mainly (if not exclusively) of slower-growing broadleaf trees sourced from the local area—a marked difference from the regimented stands of non-native pine that British forestry focused on for much of the 20th century—the forest is gradually starting to reveal its ultimate appearance.

Over the past 20 years, the National Forest has spread like a sort of expressionist mosaic across the landscape. By offering funding incentives for mainly private landlords to plant, it has steadily joined up existing woodlands to create what will ultimately become a seamless forest habitat. By spring 2016, 8.5 million trees had already been planted there, but the project is by no means finished. Currently a little over 20 percent of the designated land is forest area. Maintaining the current jigsaw puzzle layout, the aim is to cover one-third of the total area with trees.

The area of the National Forest in 1991, before planting began. The pale green areas show new plantings conducted before the project’s foundation.

The same area in 2016, with new plantings greatly enlarged.

So far, over 80 percent of this forest area is accessible to the public, making it easy to enjoy for nearby city-dwellers. Indeed, it’s the intimate link with major cities that connects the National and Northern Forests, as both plans create new havens of peace in some of England’s more densely inhabited, city-filled areas.

The advantages of this are numerous. Just as trees within cities clean and cool their air, so do woodlands on the urban edge reduce the pollution and noise caused by highways, helping to shelter both residents and visitors from their effect. In the US alone, it’s estimated that the pollution-reducing abilities of trees cut annual health costs by as much as $7 billion. Seaming the busier transit corridors of England with trees would not only give local cities newly attractive playgrounds on their fringes, but ensure that these fringes—and possibly even parts of the cities beyond them—are cleaner, fresher and more moderate in temperature.

With even the National Forest still incomplete and juvenile, all this is some way off. Across its length, the results are already magical, with even lower thicket-like saplings scattered across the landscape in a way that looks utterly organic (although it isn’t), while the forest floor in places is already turning ultramarine with bluebells in spring.

Recreating this sort of widely-spaced green patchwork in the new Northern Forest 100 miles away would certainly be welcome. Threaded through an area that touches the outer edges of major cities such as Liverpool, Manchester, and Leeds, the area is one of the least wooded in all Britain. It’s nonetheless an area that’s often beautiful, passing through high moorlands as it crosses the low Pennine mountain range. Turning this corridor into a greener, lusher place wouldn’t just make the surroundings of nearby cities more attractive. In doing so, it might also attract weekend visitors away from the nearby Yorkshire Dales and Peak District, celebrated beauty spots and national parks that can heave with people on sunny weekends. It would also serve to join up habitats for rare animals such as birds and bats. Within a few decades, a squirrel could travel from east coast to west, solely by leaping from tree to tree.

Quantum Computers: Getting Closer To Become A Reality

GizmoCrazed - October 9, 2011 0
Computers might have more calculating and processing power than its inventors and developers but the latter are not in a mood to bank the...