Tech companies working with augmented reality and virtual reality technologies raised more than $3 billion in venture funding in 2017. This data comes from analytics firm Digi-Capital and suggests that while the buzz surrounding the AR/VR space has tapered off, the sheer amount of cash getting pumped into the industry is continuing to surge.

Though the report’s numbers highlight 2017’s marked dollar increase over 2016 investments, deal flow seems to be lighter, with more than half of this cash coming from just four massive deals:

While juggernauts like Niantic, Improbable and Unity were able to raise hundreds of millions from investors this year with pitches that undoubtedly touched on the future importance of AR/VR technologies, the strong, more traditional, gaming industry backbone that the companies have was likely key to them scoring that capital now. 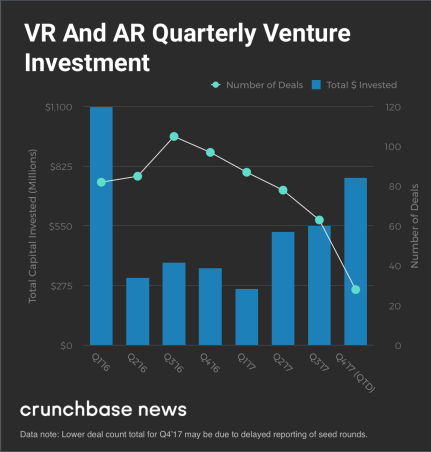 Magic Leap is the industry’s biggest outlier, and now that we actually have an idea what their first product is going to look like, it’s probably going to start looking more like a real company. We still don’t know when exactly their product is coming or how much it will cost, but we more critically have no idea how much of the company’s efforts will skew toward enterprise versus traditional consumers.

For smaller companies that raised seed rounds for their VR ambitions in 2016 and 2017, the trend toward fewer deals (as evidenced by Crunchbase findings here) suggest that the frothiness is subsiding and there may be fewer follow-on rounds and more AR/VR startups joining the dead pool.

In the latter half of 2017, the focus moved from headset-based VR to mobile-based AR with Apple’s ARKit and Google’s ARCore at the center of attention. The reception has been limited, given that the app’s built on the platforms have been skewed toward visualization only and pretty much suck as a result. The consumer AR headset space is largely bone-dry as companies wait to see where Apple points the industry and Microsoft and Magic Leap build for the consumers of 10 years from now.

There are still signs of promise, but the AR/VR hype correction of 2017 took the wind out of a lot of sails in the AR/VR space, while Google, Apple, Facebook and Microsoft are the ones with pockets deep enough to see what’s left. It’s nice to see so much money found its way to startups, but when it comes to an emerging technology, seeing this downward trend in deal flow is concerning.

GizmoCrazed - November 5, 2019 0
Did you know that almost one-quarter of the world's population uses Facebook? The potential this holds for digital marketers and businesses of all kinds...

Google+ Runs Out Of Disk Space — Bombard Users With Spam