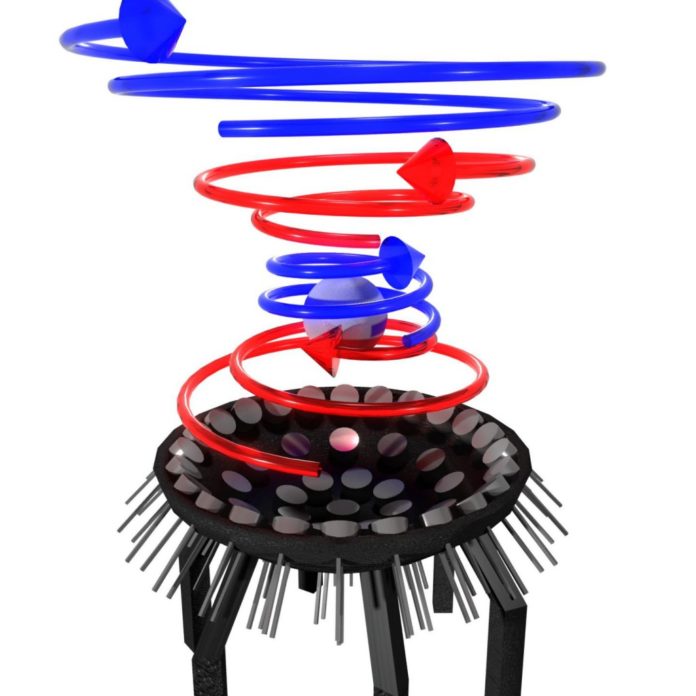 Light as a feather, stiff as a board: It’s a game you may have played growing up, anxiously repeating the phrase in the hopes that your friend would start levitating. Thanks to new research published Monday in Physical Review Letters you might have an alternative means to lift you and your friends’ besides fingertips and witchcraft.

Researchers from the University of Bristol demonstrated that it’s possible to steadily trap particles larger than a wavelength in an acoustic tractor beam. If you’re not a Star Trek fan, a tractor beam is a device that can manipulate gravitational forces to push or pull objects.

These findings could lead to new medical tools, hands-free production lines and even human levitation. All would be great, but fingers crossed the last one.

In previous acoustic levitation simulations and experiments, as particles get larger they start to orbit around the center until flinging out of the device. But Bristol researchers found that objects can be controlled by rapidly fluctuating acoustic vortices of opposite directions. Basically, they would emit one counter-clockwise vortex for a short period and then emit a clockwise vortex for the same amount of time. A news release described the vortices as “tornadoes of sound,” with a loud twister-like structure and a quiet core.

This acoustic tractor beam emitted ultrasonic waves hitting a pitch of 40kHz (notes that ultrasound-sensitive animals like bats can hear) that levitated a sphere measuring more than 2 acoustic wavelengths. But the objects could eventually get much larger than that.

“In the future, with more acoustic power it will be possible to hold even larger objects,” said Mihai Caleap, senior research associate who developed the simulations, in a news release. “This was only thought to be possible using lower pitches making the experiment audible and dangerous for humans.”

Eating Breakfast Might Not Matter When It Comes to Weight Loss

GizmoCrazed - February 1, 2019 0
Break your fast or go hungry — a new study says a morning meal has little effect on weight loss. (Credit: Lolostock/Shutterstock) There are two...