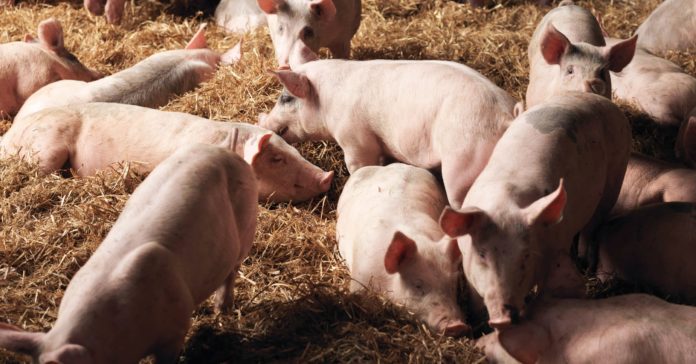 The pig looks like any other pig, only it’s been wearing a backpack for a week—in the name of science. Just behind its head sits a control box, with a battery and processor, from which runs a cable that enters through the pig’s flank. Once inside, the cable attaches to a very special robot clamped onto the pig’s esophagus, the pathway to the stomach. Little by little, the robot lengthens, in turn lengthening the tube.

The robot attached to a segment of esophagus.

This pig doesn’t necessarily need a robot tugging on its esophagus, but children born with a section of theirs missing, a disorder known as esophageal atresia, may in the near future. What researchers detail today in the journal Science Robotics is how their robot could not only help treat this disorder, but also short bowel syndrome, in which a child loses large portions of the intestines to infection. Implantable robots, then, may help extend organs in the human body—though weirdly not by stretching, like you might assume is going on here.

Current treatment for esophageal atresia is not in the least bit simple or pleasant. Surgeons attach sutures to the two ends of the food tube and pull them out through incisions in the child’s back. “They tie these onto what looks like buttons on the kid’s back,” says Boston Children’s Hospital researcher Pierre Dupont, co-author of the paper. “And they apply tension to those ends in this way.” This lengthens the two disconnected bits of the esophagus, so when the surgeons put them back in the chest and sew them together, they now bridge what was once a gap.

Problem is, this lengthening can take up to a month, and the kid has to be sedated the whole time. The sutures are under a lot of tension, and if the patient moves, they could pop out. On top of that, the procedure could really be more precise: Surgeons base how much tension they’re adding on experience. “If they pull too hard they tear out,” says Dupont. “If they don’t pull enough the tissue doesn’t grow. But they’re trying to pull as hard as they can without it tearing because they don’t want to have that kid paralyzed and sedated longer than they have to.”

Ideally, you could build a more precise system that works within the body, automatically sensing how much tension it needs to apply. Which is where the pig comes in. It isn’t missing a section of its esophagus, so in this experiment the robot—which is attached by way of two rings wrapped around the esophagus and sutured an inch and a half apart—is lengthening to stretch the tube like a rubber band.

Except it’s not really stretching, as it happens. “This is what our surgeons knew from experience from looking at the tissue,” says Dupont, “but never had been able to verify.” The tension that comes with the traditional surgical and robotic methods is actually encouraging new tissue to grow. The robot is inducing the esophagus to produce new cells, which leads to healthier tissue than if the tube were just stretched out. The researchers managed to get the length of the pig esophagus to increase by 75 percent in just over a week.

Theoretically, in a child with a gap in their esophagus, the robot would still make the esophagus longer—it would just bring two incomplete ends together. Surgeons would suture one ring to the top end of the esophagus and one to the bottom end. Over time, the robot would contract, bringing the two ends closer and closer, inducing those cells to grow. Eventually the gap would close enough that surgeons could stitch the two ends of the tube together, making the esophagus whole.

The robot could also potentially treat short bowel syndrome. In this case, surgeons have removed a significant length of infected intestine. “The remaining length is so short, the food goes in one end and it comes out the other end without any chance for absorption of nutrients,” says Dupont. “So if there was a way to induce lengthening of that bowel then those kids wouldn’t have to be fed intravenously.” Here the robot would work more like it did in the pig, attaching to the intestine and slowly expanding to lengthen the organ.

“This is very intriguing concept that attempts to address therapy for extremely challenging group of patients,” says Nikolay Vasilyev, a researcher who has developed a robot that helps hearts pump. “It remains to be seen how the robot can be safely explanted and how the tissue responds over the longer-term.”

The solution there may be degradable materials. “What I’d love to do is make a version of my robot,” says Dupont, “that even though it’s placed exterior to the bowel, it would be resorbable, so that all of the components would dissolve away and we wouldn’t have to subject the kid to another surgery.” So the body would essentially digest the robot outside of the digestive system.

Before that all can happen, though, the researchers will have to shrink down a robot that works on 100-pound pigs into something that’d not only fit 3-month-old humans, but work entirely inside the body. Which doesn’t seem impossible: Robots will only get smaller and more sophisticated from here. And soon enough, machines of all kinds will be making their way into the human body—think robots made of pig intestine that you swallow, for instance. So thanks, pigs, that’ll do.

GizmoCrazed - July 6, 2019 0
The Daily Crunch is TechCrunch’s roundup of our biggest and most important stories. If you’d like to get this delivered to your inbox every...

Twitter tests suggestions on people to unfollow for when your timeline...