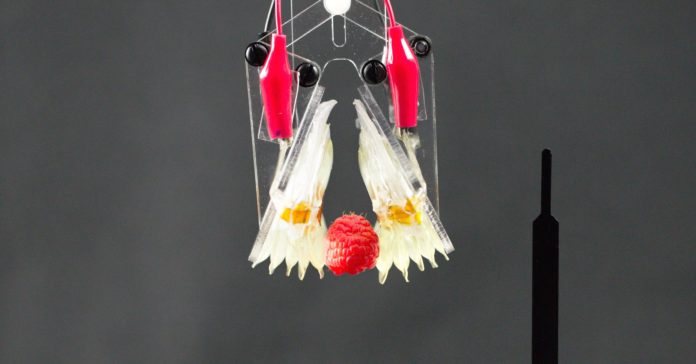 Oh, the poor humanoid robots. After decades of development, they’re still less sprinty Terminator and more … octogenarian on sedatives. While these robots may look like us, they aren’t built like us—electric motors in their joints drive their herky-jerky movements, whereas our muscles give us more precise control over our bodies. Well, unless we’re on sedatives.

But a burgeoning field called soft robotics promises to bring more “natural” movements to the machines. And today, a pair of papers in Science and Science Robotics detail a clever new variety of robotic “muscle,” a series of oil-fueled pouches activated with electricity. This actuator (aka the bit that moves a robot) is as strong and efficient as human muscle, but can pull off more contractions per second. Which could make for a prosthesis that moves more naturally, perhaps—or maybe farther down the road, soft yet strong robots that help you around the house without accidentally terminating you.

The new class of robotic muscle is called a “hydraulically amplified self-healing electrostatic” actuator, or “hasel.” They come in several designs, which we’ll get to in a moment. But in general, the actuator makes use of a pouch filled with oil—surrounded on either side with electrodes. Apply voltage to these and it creates an electric field.

“We’re just using these electrostatic forces to displace the fluid, to bring these electrodes together to pump the fluid to a different part of the pouch,” says Nicholas Kellaris, mechanical engineer at the University of Colorado Boulder and lead author of the Science Robotics paper. That is, the hasel actuator squeezes inward on itself. “That’s what causes the pressure and the movement and deforms the structure to cause actuation.”

Now, there are other soft actuators out there that use compressed air or fluid for their movement, but these rely on bulky external reservoirs to hold the stuff. The hasel actuator, in contrast, leverages the oil (transformer oil, specifically) already inside the flexible pouch. This makes the actuator much faster, since its fluid doesn’t have to move through a long tube from a reservoir.

So, for instance, the researchers created circular hasel actuators that form into donuts when activated. “In this case we apply electric field over one part of the actuator and that pushed liquid out to what you would call the inactive region,” says Eric Acome, mechanical engineer at the University of Colorado Boulder and lead author of the Science paper. That thickens the actuator by shoving oil in the center into a ring around the edge—again, a donut. So stack several of these actuators together in two groups, each representing a “finger,” and you can bring the thickening stacks together to oh-so-delicately grasp a raspberry without exploding it. (See photo at the top of this story.)

Or say you want your robotic muscle to lift something. For that you’d want a rectangular actuator made up of three strips of pouches running horizontally. Each of these pouches has electrodes attached to their top half. If you apply voltage to the electrodes, they come together and squeeze the oil into the other half of the pouch, forming it into more of a cylinder. This shortens the length of the whole rectangular actuator, which could in turn lift a weight attached to the bottom. (You can try this at home, actually. Get a Ziploc bag and fill it up with a bit of air. Lay it flat and push down on one side and you’ll see the other end pull toward you.) The researchers can stack these actuators as well for even more strength.

So hasel actuators can lift and grip with impressive strength and precision. The challenge, though, is the electricity used to power them. Electricity is not a gentle force, especially when you’re using it to control the relatively delicate materials used in soft robotics. Another variety of soft actuator operates on the same principle as a hasel, using opposing electrodes to squeeze a piece of rubber—but that can lead to electric shorts, essentially little lightning bolts that rip through the rubber and lead to catastrophic failure.

That’s where the oil functions as a sort of shield for the hasel actuators. “It would just pass through the liquid and then moments later that liquid redistributes, becomes insulating again, and the device can continue to operate,” says Tim Morrissey, also of the University of Colorado Boulder. That is, instead of ripping apart.

Really, the beauty of the hasel is its relative simplicity compared to your traditional actuator, which is a highly complicated electric motor combined with a gear box. “This work will inspire others to explore interesting ways to combine different passive and active soft materials to create new actuator systems,” says Conor Walsh, a bioengineer at Harvard.

Still, because soft robots are far more delicate than their traditional robot counterparts, their designers have to worry about them not puncturing and losing power (and spilling transformer oil on your floor). So before they start working among us, soft robots will need self-healing skin. And indeed, some soft robots already do that. The team behind the hasel actuator is working to give their creation the same power.

Once they’re good and robust, soft robots of all kinds will infiltrate our lives. The rigidity of traditional prosthetic arms could give way to softer, more sensitive limbs. Making robots soft will allow us to work alongside them much more safely, meaning they won’t just steal every human job—they’ll complement human labor. And, inevitably, soft robots will be our companions, platonic or, um, otherwise.

GizmoCrazed - April 3, 2014 0
Only recently, a leak of schematics pointed at a more definitive look of what could be the next flagship phone by Apple. The content...

Conserve the Sound is an archive of noises from old tape...