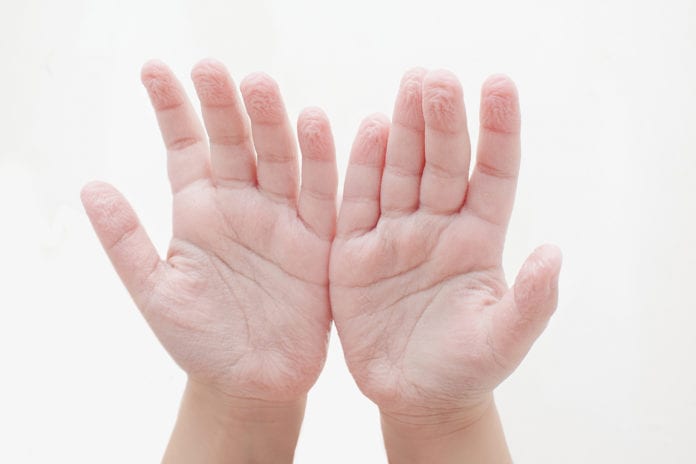 Pruny fingers, they’re an unavoidable byproduct of a long bath or a turn washing the dishes. Though they may seem like little more than the puzzling cost of getting our hands wet, the phenomenon could actually be helping us keep a tight grip on those wine glasses.

If you’ve never thought about it, consider that fingers and toes are the only parts of our bodies that wrinkle up (as a result of constricting blood vessels) when exposed to water for extended periods. It can’t be an intrinsic property of our skin, then. For years, surgeons have also noticed that when the nerves to the hand get cut, fingers refuse to wrinkle anymore, indicating that our sympathetic nervous system is involved somehow. The absence of wrinkles has even been proposed as a method for determining whether someone has experienced nerve damage.

The patterns of ridges and valleys that contour our digits could instead by a very specific evolutionary adaptation meant to rework our smooth skin into something better suited for slick conditions. To find evidence for the theory, researchers from Idaho’s 2AI labs looked beyond the confines of the human body. In a 2011 paper published in Brain, Behavior and Evolution, they compared the patterns that adorn our sodden fingers and toes to other structures optimized for wet conditions and found some startling similarities. Wrinkles bear a striking resemblance to both the treads on rain tires and geographical drainage networks, the authors say, offering some clues as to their true function.

Rain tires work by guiding water off of the tire’s surface into channels to reduce the overall slipperiness, and our fingers seem to be doing the same thing. An analysis of multiple finger wrinkles reveals a system that branches into more and more “streams” as it gets further from the tip, in the same way that drainage networks disperse water and funnel it into the earth.

A study in 2013 provided some support for that line of thinking. Participants had to move marbles submerged under water around — both after letting their hands soak for 30 minutes to get good and wrinkly, and with dry hands. When transferring marbles from a container of water to another container, those with wrinkled hands had a distinct advantage.

Our fingers even have the edge over rain tires when it comes to grip. While tires are rigid, our skin is pliable, meaning that while we get the water-draining advantage that wrinkles offer, our skin will also compress when we grab something, increasing the surface area and adding to grip strength.

A follow-up study from a different group of researchers in 2014 came to a different conclusion, however. Attempting to repeat the experiment, they found that wrinkled fingers offered no conclusive benefits when performing a task involving dexterity, and, at best, left participants no worse off. They conclude that finger wrinkles are simply a by-product of our blood vessels constricting when fingers and toes get wet. Another study in 2015 came to similar conclusions.

These studies, however, looked only at fine motor movements that involved manipulating small objects. Different situations, like grabbing onto a branch, for example, could yield different conclusions.

Rain tread or not, maybe it’s best not to call our fingers pruny anymore.

Some Facts About Mars Curiosity Rover You Probably Didnt Know

GizmoCrazed - August 19, 2012 2
NASA’s Mars science rover Curiosity has entered Mars and landed there to start its two year mission seeking the evidence about existence of life...

Google AR search now pulls animals off the screen and into...