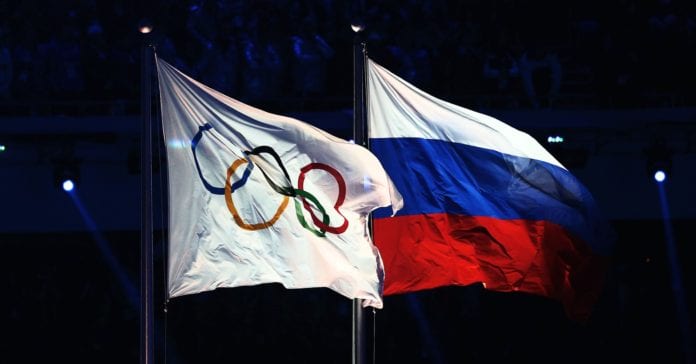 It took a while, but Russia finally got body-checked out of the Olympic Games. The road to ruin began in 2015, when two Russian track athletes-turned-whistleblowers raised suspicion about widespread state-sponsored doping at the 2012 London Games, followed by an independent report about problems at the 2014 Sochi Winter Olympics. Now, the International Olympic Committee has slammed the door on Russia’s Olympic dreams, accusing the country of running a state-sponsored program involving more than a thousand athletes since 2011. The Russian team and all of its sports officials were banned from the upcoming winter games in PyeongChang, South Korea, in February, although individual Russian athletes who prove they are clean could compete under a neutral flag.

IOC president Thomas Bach announced the ban at a press conference in Lausanne, Switzerland Tuesday, citing a 17-month investigative report by Samuel Schmid, Switzerland’s former president. “The report clearly lays out an unprecedented attack on the integrity of the Olympic games and sport,” Bach said. “As an athlete myself, I’m feeling very sorry for all the clean athletes who have suffered from this manipulation.”

Despite the earlier warnings of Russian foul play, Bach said Tuesday the IOC didn’t have all the information needed back then to make its decision. The Schmid report detailed the structure of the Russian sports bureaucracy and how it is intertwined with the Russian government. It also gave interesting details about how Russian intelligence agents were able to unlock tamper-proof urine sample bottles—using a dental instrument and a lot of hard work.

Swiss forensic investigators spent two months to unlock the secrets of the supposedly impregnable BEREG-KIT bottles. These Swiss-made bottles are considered tight after five clicks of the sealing ring, with a maximum closure of 15 clicks. But by using a long, thin pointy metal instrument, the investigators were able to jimmy open the seal by carefully inserting it into the plastic ring and pushing it up. The process left tiny scratches on the inside of the bottle—though they were only visible under a microscope. That’s how they were able to identify tampering in the Sochi samples.

More than a quarter of the Russian urine samples were likely tainted or swapped out with clean urine collected from the same athletes months earlier. The report also found that suspect Russian urine samples contained high levels of salt, several times higher than found in the human body, which was used to reconstitute the urine.

The Russians didn’t invent any new performance enhancing drugs for Sochi. “They just bought them from the pharmacy,” says Mark Johnson, a San Diego-based author who has written about doping in sports. “It shows that where when you take the resources of a government, both the scientific and financial resources and their research resources and apply it to a problem, they can find a solution,” Johnson says. “If it is one athlete trying to pry open a bottle, you can’t do it.”

The culture of doping in Russia and the Soviet Union goes back to the 1960s, when success in sports brought glory to the nation. Between 1968 and 2017, Russian athletes were stripped of 50 Olympic medals—including one third of their 33 won at the Sochi games.

The IOC’s Bach said that international athletes that finished behind the Russians who doped will have a special ceremony in South Korea. “We will do our best to reorganize ceremonies in PyeongChang in 2018 to try to made up for the moment they missed on the finish line or the podium,” Bach said. “The IOC will propose or will be taking measures for a more robust anti-doping system under [the World Anti-Doping Agency] so that something like this can not happen again.”

But Johnson and other critics are skeptical that the IOC’s Russia ban or a new testing system instituted will make a difference in future Olympic games. He notes that record-breaking athletic performance—regardless of whether it is the result of drugs, or perhaps soon through gene-editing techniques—is part of what draws TV viewers, advertisers, and national prestige.

“The objective of pro sports is to entertain and push the boundaries of performance, it’s not to be a moralistic teacher or imposer of values,” says Johnson. Of course, Olympic officials beg to differ. They point to the stated “Olympism” values of fair play, ethics. and hard work.

But sports and national prestige will always go together, and Russians have long since decided doping is worth the risk. Vitaly Murko, Russia’s former minister of sport, was implicated in having a direct role in the doping program by the Schmid report and an earlier 2015 investigation by WADA. On Tuesday, the IOC gave him a lifetime ban. But even though Murko can’t go to the Olympics, he won’t be leaving sports behind. Now the country’s deputy prime minister, he is also president of the Russian football union—and next summer, he will be an official host of Russia’s World Cup soccer tournament.

Here's What Astronauts See When a Rocket Aborts Mid-Flight

iPhone 5 Media Event To Be Held On Apple Campus In...

‘Faster Than Light’ Theory Rejected, Einstein Still On The Safe Side