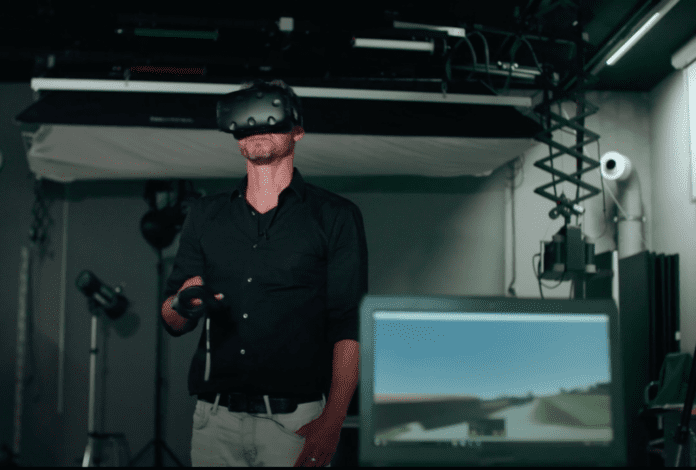 A scene from the short documentary film “Nazi VR” that tells of how a virtual recreation of Auschwitz helped convict a Nazi war criminal. Credit: MEL Films

During World War II, Reinhold Hanning served as a guard at the Auschwitz concentration camp where more than 1.1 million people were killed by Nazi Germany. More than 70 years later, a virtual recreation of Auschwitz helped German prosecutors convict Hanning of being an accessory to the murder of 170,000 people. Now a new documentary film explores how the virtual model of Auschwitz can be viewed through virtual reality headsets in future court cases involving the last surviving Nazi war criminals.

The virtual reality version of Auschwitz has not yet been used in a trial. But a judge specifically referenced how a 3D computer model version helped the court to understand the viewpoint Hanning would have seen from standing in one of the concentration camp’s watchtowers. A new short documentary film by LA-based online magazine MEL Films and director David Freid explores that specific court case and the possible uses of virtual reality in future war crimes trials.

“We’ve only just begun with what virtual reality can accomplish in the courtroom,” says David Scheffer, a professor of law at Northwestern University and former U.S. war crimes ambassador from 1997-2001, during a voiceover in the film.

The virtual Auschwitz was created with the help of Ralf Breker, a forensic VR engineer working in Munich, Germany. He and his colleagues typically use their laser scanning technology to create virtual versions of crime scenes where investigators can walk around and work inside the virtual version without disturbing the real crime scene.

For recreating Auschwitz, Breker and his colleagues spent five days doing laser scanning at the site of the former concentration camp in May 2015, according to BBC News. Rediscovered blueprints of the camp and computer modeling helped reconstruct many of the buildings that have already been torn down. The resulting virtual model of Auschwitz provided one part of the prosecution’s case along with a dozen elderly Auschwitz survivors.

Hanning was convicted by a German court in June 2016. The former SS guard appealed his conviction before beginning to serve his five-year prison sentence, but died at the age of 95 this past summer.

In one sense, the virtual recreation of Auschwitz represents an educational tool and history lesson from one of the most sobering chapters in modern history. But it could also clearly serve as a type of forensics technology for criminal investigators and prosecutors. If virtual reality eventually gets its day in court, that could represent a new twist on a rising technology that has most commonly been used for entertainment and job training.