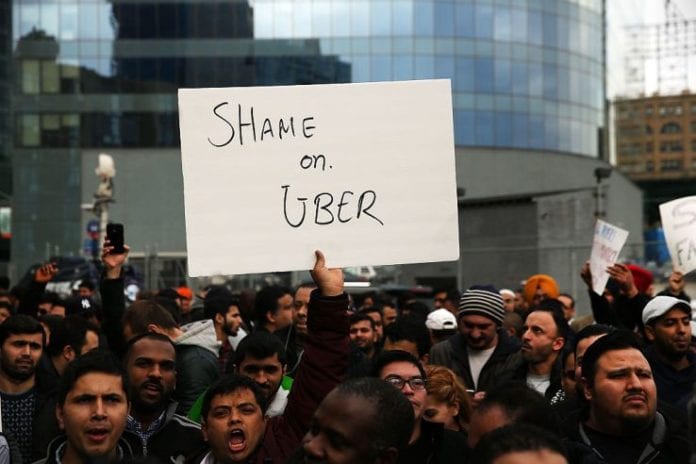 Today was a momentous day in Uber history. After much debate, rumors and strife over the past few weeks, it looks like the company and its shareholders have come to an agreement over a tender offer that will see SoftBank own nearly 15 percent of the company, while also injecting around $1 billion in fresh capital. That deal is expected to close in the new year.

The SoftBank tender offer was initiated after Uber’s board agreed to a set of governance changes back in early October, which included increasing the board’s size from 11 to 17. Those changes were reported to be contingent on SoftBank agreeing to invest in the company, which now seems like a done deal.

Although there are a lot of things that make Uber’s story unique, the size of its board is one that has gotten little attention, and could provide a whole new set of dynamics to watch for as the company moves toward stabilizing its future after a rash of bad news stories this past year.

At 17, Uber’s board would be among the largest corporate boards publicly or privately held. Compare that to some of the Valley’s largest tech companies: Apple and Facebook each have eight, while Snapchat and Twitter each have nine. Alphabet, Oracle and Intel each have 12, Microsoft has quite a few at 14 and IBM is whopping at 15 members.

Perhaps even more relevant, recent IPO candidates have had fairly small boards. Stitch Fix currently has five members, CarGurus has six and Blue Apron has eight. Looking more broadly, the median for the S&P 500 is 11, putting Uber’s 17 members far above the average for even actively traded companies, and even companies with market caps above $50 billion.

And just as a fun comparison, Uber’s board will be larger than the UN Security Council, which has 15 members, five permanent and 10 non-permanent. (One wonders which has the more difficult agenda next year.)

With all of the challenges that Uber faces, the question isn’t whether it has enough supervision, but whether a board of that size has the coherence and force to discipline the company and ensure that the constant drumbeat of scandals in the past few years can be rectified while improving the company’s long-term prospects.

You might expect the board size to be a function of the number of investors involved with Uber, which has raised about $12.5 billion according to Crunchbase. Traditionally, investors who lead funding rounds in companies get a board seat, if not more than one. Yet, Uber’s board is surprisingly devoid of active investors.

Currently, there are just three VCs on Uber’s 11-member board. That includes Benchmark partner Matt Cohler (who took over for Bill Gurley earlier this year); Yasir Al-Rumayyan, who is the managing director of Saudi Arabia’s Public Investment Fund; and David Trujillo at TPG Capital.

What’s interesting is that those VCs are equally matched by Uber founders Travis Kalanick and Garrett Camp, along with first employee and one-time CEO Ryan Graves.

Beyond those six, Uber’s new CEO Dara Khosrowshahi got a seat when he joined. Arianna Huffington joined last year, as did Wan Ling Martello, a senior exec at Nestle, who joined earlier this year as an independent director in the wake of Susan Fowler’s open letter about Uber’s culture. Finally, Kalanick appointed to the board in late September former Xerox CEO Ursula Burns and former chief of Merrill Lynch John Thain in a bid to protect his control of the company.

Now, add six new directors with the consummation of the SoftBank deal, which has been reported to include a new chairman, two directors for SoftBank and three new independent directors.

What you get is a Frankenboard of crazy proportions.

Given the high-dimensional chess that has been played by Benchmark and Kalanick over the past few months, it’s clear that neither side is ready to give up seats in a bid to bring the board size to a more manageable level. The best option is likely for the company to continue to shoot for a public debut in 2019, at which time the board can shrink as investors and others clear out their holdings and move on.

More people at the helm is not going to right the ship of Uber. What Uber needs is a unanimous board and precision focus under its new CEO in order to fix the many, many wrongs the company has committed. Seventeen is the new magic number for Uber — let’s hope the company can get everyone on the same side of the road.