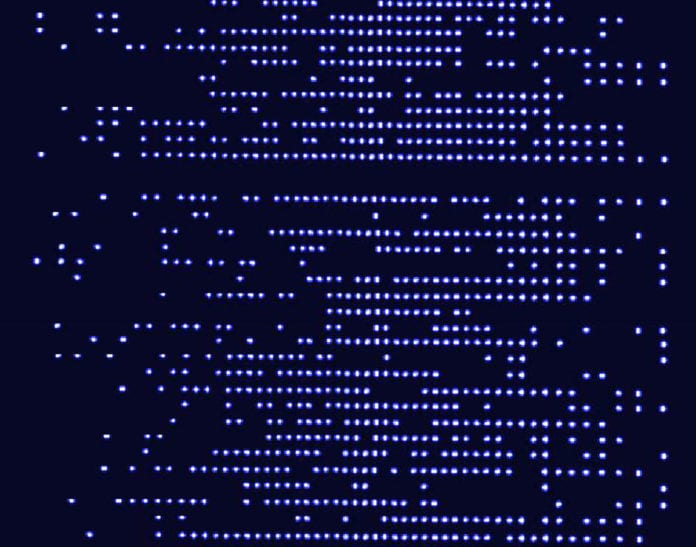 Each horizontal line is a snapshot of a single atom, whether its lit up or not indicates the atom’s magnetic state. (Credit: Data: J. Zhang et al.; graphic: E. Edwards)

Science, especially these days, can move slowly. The days of big leaps in our understanding are mostly behind us, and the progress of scientists is typically slow, but steady. That’s why something like quantum computers, which you’ve probably heard a lot about, have been so slow to actually arrive.

The revolutionary new systems would harness the strangeness of the quantum world. Today’s “classical” computers use regular bits, with data encoded either as 0s or 1s, but quantum bits (qubits) could also be a mix of 0s and 1s, allowing for vastly stronger computing power. (It’s actually way more complicated, but this is a basic way to understand it.)

The thing is, qubits are hard to work with. They can often be as tiny as individual atoms, and it’s not easy getting them to interact with each other — but not the environment they’re in. Some engineers have announced limited successes with systems of a handful of linked qubits, but the process has been slow.

But two papers appearing in Nature today have shown just how far we’ve come. Neither describes a full-fledged quantum computer, but instead two teams have created a kind of precursor: “quantum simulators.” These can solve and simulate particular problems beyond the reach of classical computers, but don’t have the seemingly infinite potential of general quantum computers.

In the first experiment, scientists from MIT and Harvard used a system of lasers as “optical tweezers” to set up a string of 51 rubidium atoms as a quantum simulator — creating many more qubits than previous attempts.

The second experiment used charged ytterbium atoms instead, manipulating them with electrodes and magnetic fields. The physicists, from the University of Maryland and the National Institute of Standards and Technology, managed to string 53 atoms together, apparently a new record.

Both teams are confident their models can scale up to the order of 100 atoms, which would put their devices in the realm of true general-purpose quantum computers. But already, even at the quantum simulator scale, these machines should be able to solve previously impossible equations and model complex new materials and drugs.

Basically, we’re now at the point where useful quantum computing can actually start to take place — and it’s only going to get better from here. Hopefully, we’ll start to see all that slow work pay off.

What Happens When a Jury Grapples With Perplexing Science

GizmoCrazed - March 28, 2019 0
Barbara Schmidt keeps a box of newspaper clippings under her bed. It’s a cheap plastic container with a light-blue lid. She rarely opens it....

Meural raises $5 million and brings Canvas to over 100 stores