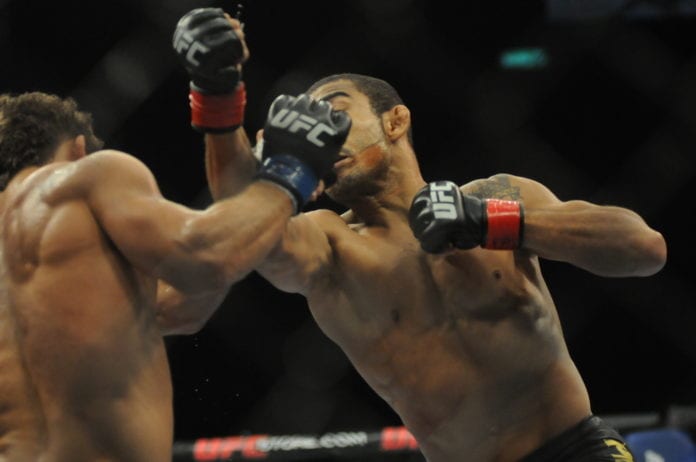 Michael Bisping has fought professionally in mixed martial arts since 2004. Last year, the journeyman won his first title. He knocked out Luke Rockhold in the first round to win the middleweight belt in the Ultimate Fighting Championship, or UFC, the most popular of several MMA organizations.

On Nov. 4 of this year, at age 38, Bisping defended his title for a second time. His opponent was the Canadian Georges St. Pierre, a former UFC champ. The fight, held in New York’s Madison Square Garden, was close until the third round, when a series of blows knocked Bisping to the canvas. Pierre pounced on the fallen fighter and applied a rear-naked choke, cutting off oxygen to Bisping’s brain. His body went limp.

On Nov. 25, within weeks of going limp, Bisping was in the octagon again. This time 7,000 miles away in Shanghai, China. He had volunteered to fight a young up-and-comer after the original opponent, Anderson Silva, was pulled from the card following a failed drug test. It was no contest. Bisping got knocked out in the first round.

The most well-known combat sport organization, the National Boxing Association, is no angel; allegations of corruption have plagued it for decades, and it’s not known for putting a fighter’s health first. Still, it’s hard to imagine one of its former and high-profile champions being allowed to fight three weeks after a violent loss, as Bisping did in the UFC.

But this is mixed martial arts, a 25-year-old combat sport that has become a multi-billion-dollar industry — but still has its share of growing pains.

A comprehensive review published this month in the journal Trauma suggests that MMA organizations are lax when it comes to monitoring the health of its fighters. And because the organizations don’t consistently track injuries to the combatants, the rate and risk of injuries remain largely unknown, the reviewers say.

This is all the more concerning because many adolescents and teenagers are taking up the sport without fully knowing the long-term cognitive risks.

The researchers for the Trauma report looked at 18 studies involving 7,587 fighters from 1990 to 2016. Some of the studies indicated that nearly half of MMA fights ended due to head blows, though other studies offered a lower percentage, one putting it at 28 percent. Another study found only 13 percent of fighters sought or were given medical attention for concussive symptoms from blows delivered either in training or during matches. And more than half of those fighters returned to training within two days.

Of the limited neurological tests done on fighters, the results are sobering.

MMA health studies also tend to lack a clear definition of a concussion. Several studies equated a knockout to a concussion, and one used the Military Acute Concussion Evaluation as its concussion definition, the reviewers say.

None of the studies outlined a head injury protocol, or return-to-activity guidelines. There were also no discussions of minimizing traumatic brain injuries, such as by restricting blows to the head, introducing mandatory head protection or developing better padded gloves.

Joel Lockwood, an emergency physician at St. Michael’s Hospital in Toronto, Canada, and a co-author of the review, said in a news release that MMA fighters likely face long-term neurological consequences from repetitive head injuries. The danger “is unlikely to change without increased medical oversight and regulation, including accurate and consistent head injury assessment and diagnosis by trained medical professionals.”

MMA podcasts, typically hosted by former MMA male fighters, are full of bluster, expletives and the worship of toughness. During one in November, UFC light heavyweight champ Daniel Cormier called Bisping’s quick return to the octagon “a gangsta move” — a show of toughness and grit.

Yet studies show that, as fighters age into their 30s, they can’t take punches like they used to; repeated punches over years degrade the brain’s ability to recover. A 2012 report found that UFC fighters between the ages of 36 and 40 were getting knocked out more often than fighters in younger age groups. It’s also common knowledge that, after taking a pounding in the ring or octagon, a fighter needs time off to mentally and physically recuperate.

And MMA fighters do take a pounding. A 2014 study concluded that rates of getting knocked out or having a referee stop a fight (TKO) are higher in MMA than in any other combat sport. And over the last decade, three fighters have died as a result of injuries in the octagon, two from head blows, according to the Trauma review.

Some MMA analysts have shown awareness about the damage inflicted. Former UFC fighter Brendan Shaub, who hosts a podcast, expressed concern for Bisping during a show in November in the run-up to the Shanghai fight. “What I don’t like about it is that it’s 21 days since Michael Bisping just got choked out, KO’d – let’s be honest, what put him on the ground was a left hook.”

Even so, after Bisping was knocked out within minutes, no podcaster I heard talked honestly about the sport’s health realities. Dana White, the face of the UFC, has not spoken publicly about the issues surrounding the Bisping fight. The talk in MMA circles has moved on to the next card, as though the contest in Shanghai never happened.