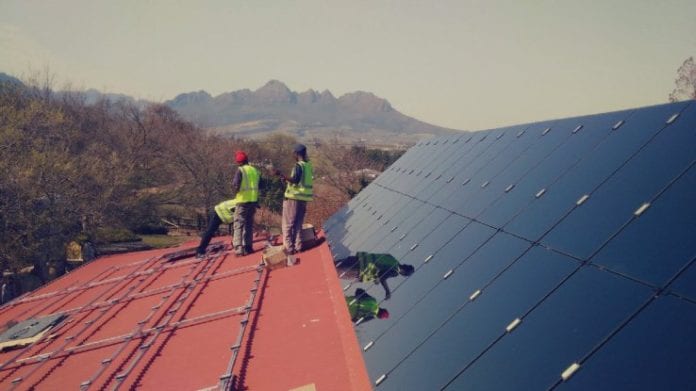 Solar power could transform small communities around the world, but remote villages can’t always scrape together the thousands of dollars required to install the requisite cells. The Sun Exchange wants to change that by leveraging the hearts and wallets of hobby investors who cover the installation costs and then have their share of the revenue trickle in for years to come. There’s even a cryptocurrency!

The whole thing, as explained onstage at Disrupt Berlin today, works like this. First, the Sun Exchange and its partners (solar companies in various sun-drenched locations around the world) locate projects where a small installation — think less than a megawatt — could make a big impact, for instance rural clinics or villages with inconsistent power.

The installation is planned and priced out, and this info is put online at a dedicated page. At that point people can purchase shares in the solar cells, from a few bucks’ worth to a major investment. 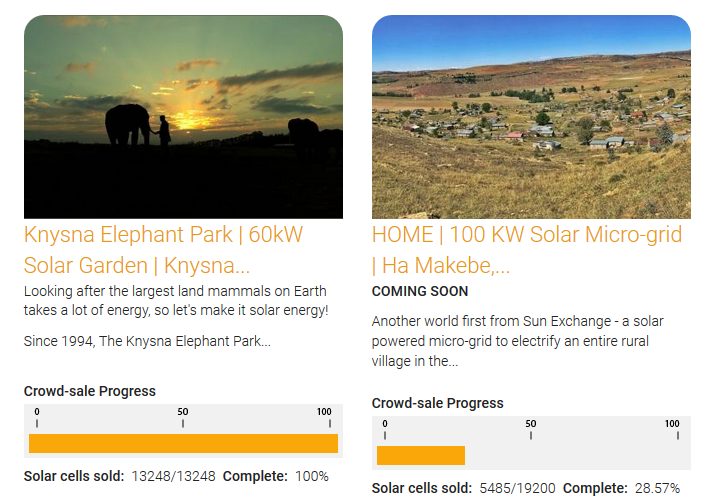 Once the costs are covered, the array is constructed and put online within 60 days, its power provided to the community for a usage fee like any utility and investors (and the company) get a part of that fee proportionate to their ownership of the array. And it really is ownership: “You’re now the proud owner of some solar cells soaking up glorious African sunshine,” the FAQ reads, and the Sun Exchange just handles the leasing and fee collection. (And insurance and paperwork, of course.)

Ideally, it’s a win-win situation. The local community gets reliable, cheap power, and you get a steady (if small) source of income essentially coming straight from the sun.

Founder Abraham Cambridge started working on the business years ago, raising a little money on Indiegogo and building a prototype with it in early 2016. But it was only when he got a bit of angel money that summer (from BoostVC) that he began making it into a real business. A $1.6 million seed round announced last month ought to keep the lights on (though that shouldn’t be a problem with all that solar power).

“Our main goal is to make the deal look attractive enough to encourage customers to take money out of existing investments that are backing fossil fuels and be put into solar energy,” Cambridge told me. “It’s up to you to decide whether it’s a worthwhile investment.”

There’s also the feel-good factor, which can’t be dismissed. These are investments that might otherwise never have been made. As Cambridge pointed out to me, they’re well below the megawatt scale that established power companies would prefer to deploy. And decentralizing ownership is not just a good idea, it’s only possible right now through small deployments of renewables with manageable costs.

The cryptocurrency side of things isn’t a gimmick. It’s a way to move small amounts of capital from (say) the U.S. to South Africa without fiddling about too much with exchanges and bank fees. You can do a traditional currency exchange in order to pay in rand or another local currency, but that means your returns will be in that currency as well, so you’ll have to convert back if you want to get paid. Using bitcoin can certainly make simple purchases more complicated than they need to be, but for good-size international money transfers, it’s a pretty nice instrument.

And then there’s SolarCoin: it’s another cryptocurrency, one that is awarded to you as a solar power operator for every megawatt-hour of juice your cells generate. They’re not particularly valuable (currently around 50 cents per coin) but hey, it adds up.

Cambridge has been refining things and smoothing out obstacles since the idea struck him, but said that more than anything the interest shown by users has vindicated the model.

“I spent the first year of the business mapping out obstacles and so the model we’ve been running with is pretty resilient,” he told me when I asked how he had improved things compared with the early stages. “What is stronger is people signing up and using the service, proving wrong the naysayers who said that no one would want to buy solar panels in this way and that bitcoin was a fad.”

The skyrocketing price of bitcoin has also led to larger-than-expected transaction fees, meaning he’s had to adjust the funding process a bit. But Cambridge is confident that will work itself out. In the meantime, the site and service are live, as are the initial successful installations. If you’d like to bring a little light into someone’s life and maybe make a buck off it, you can buy some shares at The Sun Exchange now.