The Science of Sensory Deprivation Tanks in *Stranger Things* 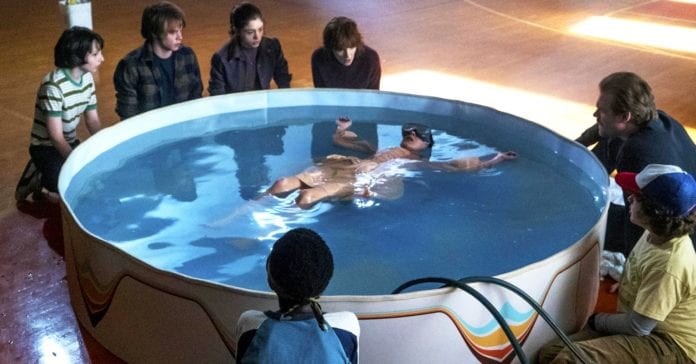 Small spoiler alert (but not really a spoiler): In season 1, the Stranger Things kids need to build a makeshift sensory deprivation tank. The essential component of this “tank” is a kiddie pool filled with water such that a person can easily float. Of course, normal water will make a human just barely float. To fix this problem, they add a bunch of salt to increase the liquid density to accommodate a floating human. According to Mr. Clark (their science teacher), they need 1,500 pounds of salt.

But was he right? Let’s take a look at the science.

Why do things float? If an object is stationary at the surface of water (or any liquid), then the net force on that object is zero. Of course there is a gravitational force pulling down, so that must mean there is some other force (with an equal magnitude) pushing up. That force is the buoyancy force. But how does it work? Let’s start with an example.

In this diagram, the yellow arrows represent the rest of the water pushing on this floating block of water. The water pushes on the block in all directions and this force increases with depth. Notice that the forces from the water on the sides have to cancel (since they are balanced). However, the forces pushing up from the bottom are greater than the forces pushing down from the top. But since the block of water is floating, the net upward buoyancy force must be equal to the gravitational force pulling down.

The weight of the water displaced depends on three things: the volume of the object, the density of the liquid (physicists like to use the Greek leter ρ for this) and the value of the gravitational field g. Putting this all together, the buoyancy can be written as:

This is idea is what Mr. Clark used to estimate the amount of salt to add to water. For sensory deprivation, you want to increase the density of the water such that it has a much higher density than the density of a human.

How Much Salt Do You Need?

Water has a density of 1,000 kilograms per cubic meter. If you don’t want to be cool, you could say the density is 1 gram per cubic centimeter but trust me—all the cool people use units of kg/m3. But what about the density of a human? It depends on the human, but it’s normally a little bit less than 1,000 kg/m3 such that most humans float. Of course a human can float or sink depending on the lungs. If you take in a deep breath of air, your lungs get bigger and your density decreases. Blow all the air out of your lungs and you should sink.

Normal people breathe. This means that you might oscillate between floating and sinking. That would make it tough to focus on using your psionic powers to find other people (like Eleven does). You need a higher density liquid—like salt water. You might already know this, but you can more easily float in the ocean (salt water) than you can in a lake with fresh water.

So, adding salt to water will increase the density and hopefully the person can easily float. But wait. If you add salt to water, doesn’t that increase both the mass of the liquid and the volume? Actually, not really. Check this out: Here is 200 ml of water and 5 ml of salt.

What happens if I pour the salt into the water? This.

Yes, the volume of the mixture did increase a slight amount—but not by much. You can dissolve salt in water and the mass increases but not the volume. I know that seems crazy, but it’s true. In fact, we like to think of water as this stuff that is continuous—but it’s not. Liquid water is made of molecules of H2O and there are empty spaces between these molecules. Salt is made of sodium and chlorine atoms. When added to water, these salt crystals separate into sodium and chlorine ions that are much smaller than the water molecules so that they don’t really increase the volume.

How about an analogy. Here I have two beakers. One has approximately 1,800 ml of ping pong balls and the other has about 600 ml of tiny cubes.

What happens if I mix these together? It looks like this.

Notice that this cube-ball mixture is still about 1,800 ml. The cubes fit in the spaces left by the ping pong balls. Pretty cool, right?

So now that we know that adding salt just changes the mass (and not the volume) of water, we can change the density. Let’s say that we want a human to float with 75 percent of the body underwater. What density of liquid do we need? Assuming a human density of 1,000 kg/m3, the liquid would have to be 1,333 kg/m3 (this is 1,000/0.75). In order to achieve this density, you would need to add 333 kilograms of salt for every cubic meter of water.

If I want to add salt to a kiddie pool, how much salt would that be? Let’s say the pool has a diameter of 8 feet and a depth of 1.5 feet. Yes, I am using imperial units because Stranger Things takes place in the ’80s—this is before they invented the metric units (just kidding). Using better units, this pool would hold 2.14 m3. That means 712 kilograms of salt. Converting to 1980s units, this is 1,569.69 pounds. Boom. Honestly, I can’t believe my estimate was that close to the actual show. I guess they had a science advisor that essentially did my calculation—good job science advisor (or Mr. Clark).