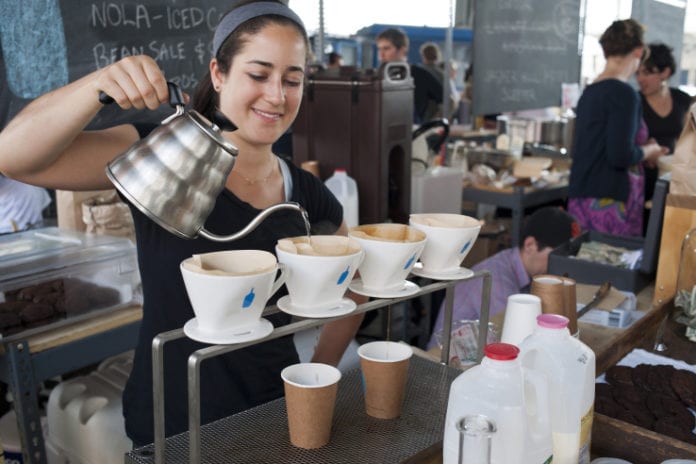 Each massive exit in the tech ecosystem usually follows the same cycle: an upstart becomes a huge business, it goes public or sells for a huge sum of money, many of the best people that built it take off and then they use their newfound wealth to start companies.

But in addition to tech, the venture community has its own pet project: coffee. With investors pouring money into companies like Blue Bottle Coffee, La Colombe and Philz, you’d probably think it’s still a pet project. Then, earlier this year, Nestlé acquired a majority stake in Blue Bottle at a valuation north of $700 million. And with that kind of an exit for a coffee startup, we’ll now test the ecosystem to see if we’ll see whether a diaspora of a class of coffee graduates will jump into the startup ecosystem themselves.

“If you view the startup ecosystem as a garden, this is a really good, healthy thing,” Collaborative Fund founder Craig Shapiro said. “Now there’s gonna be a bunch of new seeds put into the soil. There’s liquidity for all those employees and the founders who are each gonna be active in starting something new and trying something new. Maybe five years from now you and I could be talking about the Blue Bottle Mafia.”

There’s already been an array of startups that are looking to do things like make plant burgers like Impossible Foods, which raised $75 million earlier this year led by Temasek. There are also synthetic meat startups like Memphis Meats, which raised $17 million in financing from people like Bill Gates (whose name seems to come up a lot here) and Richard Branson, as well as DFJ. So the food ecosystem is not necessarily a new one. But despite a lot of venture funding flowing into this area, there doesn’t seem to have been a splashy exit in Silicon Valley’s pet project.

While it was a pet project, coffee may have made the most sense for a lot of funds like those putting money into coffee to test the waters. The operating margins aren’t bad, it’s a bit of a trendy pick and coffee may be a bit of a habit in addition to a consumer experience. Whether it’s selling and delivering roasted beans or having a shop on the way to work, coffee is a recurring experience, and there’s probably some internal metric somewhere of weekly active re-roasters or something like that. Silicon Valley loves that kind of recurring revenue model, should it actually take off.

Here’s a look at Starbucks’ operating margins for the past fiscal year, for example:

So, not really bad. But if you look at the company’s stock price, it’s had a bit of a middling year. Despite that, Starbucks still has a market cap of more than $80 billion:

I’ve made the not-so-much-of-a-joke suggestion that Amazon should buy a coffee startup. The company spent more than $13.7 billion acquiring Whole Foods, and there’s an opportunity for a brand match with Amazon and a true trendy coffee brand like Philz. And the market opportunity, as we’ve seen with the case of Starbucks, is actually quite big. Were a startup (or Amazon) to open a coffee shop across from even a fraction of each Starbucks store and try to sell a better coffee experience than that get-in-get-out-with-your-latte consumer behavior, and then sell at a slight premium, that already offers a pretty significant opportunity. And if you’ve ever been to a Blue Bottle, you’ll see that attempt at whatever an Apple Store experience looks like in coffee form is seemingly the goal.

Consumer packaged goods companies, or CPG for short, are already looking for different avenues to pick up brands that have some strong consumer affinity. Coca-Cola, for example, bought the Topo Chico — a superb sparkling water startup that’s very popular in Texas — earlier this year (thanks for spoiling that, NYT). These kinds of product-focused companies with strong consumer brands are clearly wildly valuable to larger food and beverage companies, and all this M&A activity will surely catch the eye of investors.

Shapiro argues there will be a lot of interest in clean-ingredient movements beyond just the noise happening around plant-based foods. Bigger food and beverage companies have challenges changing their procurement strategies, Shapiro said, so it could indeed make sense to pick up a startup or smaller company that is already a self-contained operating unit. He pointed to RXBar, which Kellogg acquired for $600 million earlier this year.

“I think between new funds focused on this as well as existing funds that are now paying attention to it, I think we’re gonna see significant investment and orders of magnitude more than what most people anticipate,” he said.

A splashy exit like this will probably catch the attention of investors and potential entrepreneurs with experience in the CPG space. CircleUp, for example, raised a $125 million fund to invest in consumer products earlier this year. What we’ll have to see is if an exit like Blue Bottle actually provided the liquidity investors and founders or early employees needed to get started on their own companies — but at the very least, it looks like the spark may soon evolve into a flame.