The Star Wars droids C-3PO (left) and R2-D2 (right) were the most popular science fiction robots in a recent survey by Conversica. Credit: Disney | Lucasfilm

Disney seems to have a lock on many of the more popular science fiction robots between owning Lucasfilm’s Star Wars franchise and the beloved animation studio Pixar. A recent survey of Americans found that the Star Wars robot duo of R2-D2 and C-3PO topped the choices of people’s favorite sci-fi robots driven by artificial intelligence, followed closely by Pixar’s trash-compacting robot WALL-E. Commander Data, a pasty-looking android with a much more humanlike appearance from “Star Trek: The Next Generation,” came in last.

It’s tempting to conclude that Americans may prefer their sci-fi robots and artificial intelligence to have a more machine-style appearance rather than resemble humans too closely. That is certainly the interpretation proposed by Conversica, a firm dedicated to building conversational AI for marketing and sales, after it commissioned the online poll using Google Surveys. But it’s just as plausible that the results merely reflect a popularity contest where two robots who happen to feature throughout most of the hugely popular and resurgent Star Wars franchise had the most name recognition among supposedly representative survey of Americans.

After all, Commander Data’s albino android character featured in just one of many “Star Trek” TV shows and associated films that ran from the late 1980s until the early 2000s. By comparison, R2-D2 and C-3PO have appeared in every single Star Wars film, including the original trilogy that debuted in the late 1970s, the follow-up prequel trilogy that basically spanned the early to mid 2000s, and the more recent sequel trilogy that began in late 2015 and continues in 2017 with “Star Wars: The Last Jedi.” The short and spunky astromech droid and his golden, fussy protocol droid companion even make an appearance in the 2016 standalone Star Wars film “Rogue One.”

The third-place ranking of the Pixar robot WALL-E, who featured in a 2008 film of the same name, may also seem unsurprising given that film’s crowd-pleasing factor among people of all ages. But WALL-E’s popularity relative to many other sci-fi robots and AI on the list diverges fairly drastically when the survey data gets sliced according to male and female respondents.

Female respondents appeared to like WALL-E just about as much as R2-D2 in terms of the fictional robot or AI they chose as their favorite, given that the robots nearly tied at 17.3 and 17.5 percent, respectively. But WALL-E’s popularity drops sharply to being the top choice for just 8 percent of male respondents, which makes the Pixar robot almost last in the male respondent rankings aside from Commander Data. 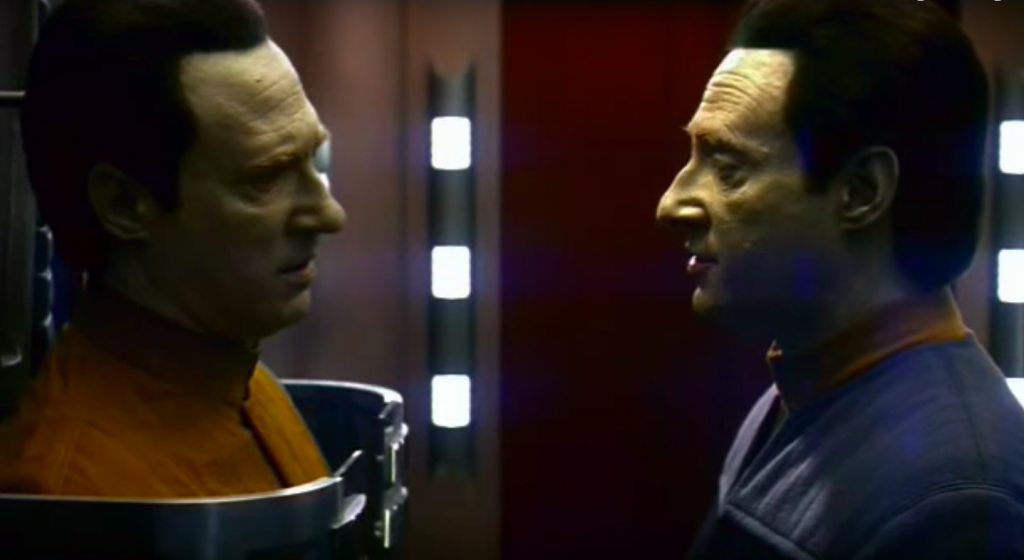 The android Commander Data stares down an earlier version of his robot line in the film “Star Trek: Nemesis.” Credit: Paramount Pictures

Indeed, male respondents seemed to shun WALL-E in favor of other contenders such as the Homer Simpson-like robot named Bender from the “Futurama” TV show (1999-2013) and the homicidal spaceship AI named HAL-9000 from the 1968 film “2001: A Space Odyssey.”

Slicing the survey data by age also yields some intriguing results. Pixar’s WALL-E is basically tied with R2-D2 for the top choice among 25-34 year olds and 18-24 year olds, within the age range generally associated with Millennials. The nebbish protocol droid C-3PO is the surprise favorite choice for respondents in the 35-44 age group.

This particular survey may not have the most conclusive findings to support the idea that a human-like appearance contributed to Commander Data’s relative unpopularity. But some research studies have found evidence backing up the idea that people may simply find it harder to like android-style robots such as Commander Data who appear almost human. Robots that mimic some aspects of human appearance or behavior also run the risk of evoking the creepy “uncanny valley” sensation among observers.

Science fiction has often played up the idea that android robots which resemble humans can be the cause of trouble. The 1927 film “Metropolis” featured a golden robot that was transformed into a near-perfect copy of a woman to act as an instigator for causing unrest. The Terminator films have typically featured robotic assassins that typically take on the appearance of cold, emotionless humans.

It might have been interesting for the recent Conversica survey to include a few more examples of well-known sci-fi robots that appear human. In the end, almost 48 percent of respondents selected “none of the above” rather than choose one of the survey’s six candidates as their favorite fictional robot or AI.

GizmoCrazed - July 29, 2011 3
Just after the launch of Google Android operating system, the competition among the cell phone manufactures become extreme. The leading manufacturers of cell phone...