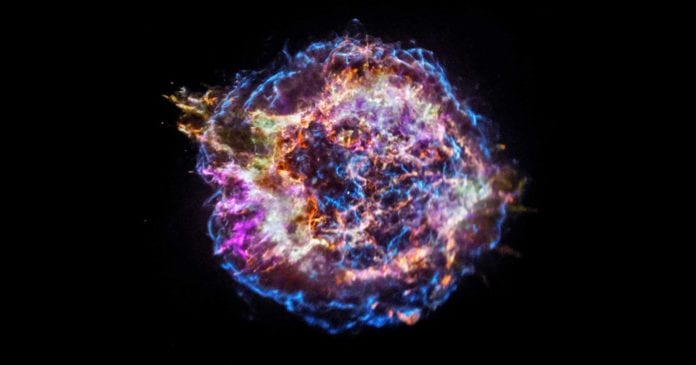 As Carl Sagan once said, “We are made of star stuff.” And so is everything in the universe. When a star explodes, it leaves behind traces that can tell you about its elemental makeup, and Cassiopeia A is a great example of those supernova remnants. The Chandra X-ray observatory snapped this photo of Cassiopeia A in X-ray light. Each color represents a different element found in the star: silicon (red), sulfur (yellow), calcium (green), and iron (purple).

Welcome new planet! This week scientists announced they had found an eighth planet in the system around Kepler 90, a star similar to ours that’s located 2,545 light years from Earth. The planet was found by parsing through NASA’s Kepler database with artificial intelligence. Seen here is an artist’s representation of the solar system, featuring its new member, Kepler-90i—which is also the third rock from its sun.

NASA’s Mars Reconnaissance Orbiter took this photo of meandering blue fault lines on Mars. These visible rifts show how material has shifted over time in the region known as Meridiani Planum. Scientists think some of this movement happened in soft, newer areas, while other shifts happened in hardened, older regolith, making for a cleaner break.

Hidden in this sparkling, peaceful image are some unexpectedly massive explosions. Scientists detected a gamma ray burst coming from this galaxy, ESO 580-49—at just 185 million light-years from Earth, it’s the second-closest ever spotted. These massive explosions are so large they send gamma rays speeding through the universe, some eventually making their way into our own solar system.

Turn off all the lights in your town and you’d be surprised to see what arches over your head. This photo shows off our twinkling Milky Way galaxy over the Paranal Observatory in Chile. In the foreground is the European Southern Observatory’s Very Large Telescope, an instrument so powerful it can spot objects four billion times fainter than what what we can see with the unaided eye.

Speaking of the Very Large Telescope, it captured this stunning photo of a stellar nursery called Sharpless 29. A stellar nursery is an area in space with dust that contracts and expands, creating stars in the process. At the center of the photo is a nebula and a very active star that’s expelling high-energy radiation out into space, carving out a reddish region in the center.

In this wider view of space, we can see the stellar nursery, Sharpless 29, in the center of the frame. The large dusty mass to the right is the Lagoon Nebula, and to the upper right, the Trifid Nebula. All of these features are homes to star formation.

Always wanted to take a dive through Jupiter’s clouds but worried about the whole dying thing? Fear not! NASA has you covered. Using data from the Juno spacecraft, scientists created a video dipping into the great red spot. The Juno team recently revealed that the storm descends a whopping 200 miles into Jupiter’s atmosphere and is actually warmer at the bottom than it is at the top. Scientists are still unsure how long the storm has been active, and they’re unsure what’s fueling it too. With Juno orbiting the planet conducting research, we might soon find out.